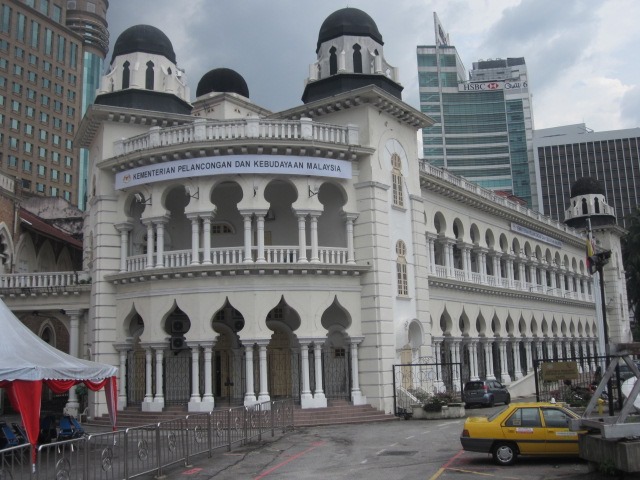 Kuala Lumpur, called KL by most,  is one of Asia’s great mixing pots: Malays, Chinese, Indian, Thai, Indonesian, Sihk and many more. You name it and it’s represented in KL, its culture and its cuisine. The city itself is a similar blend of the old and the new. And after a day in alcohol- and nightlife-free Brunei, we were anxious to return to a city with something going on.

The city, which was born in a tin boom, grew around rubber and prospered on the basis of the nation’s oil, is as shaped by its British colonial heritage as it is cultural mix. This, after all, brought the educational system, the English language proficiency,the corporate structures and the business services required for the city to participate in a global economy.

Among the city’s highlights are: 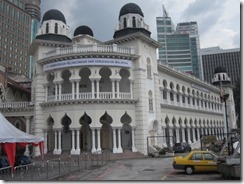 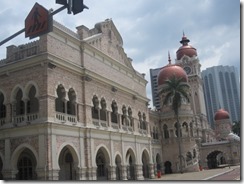 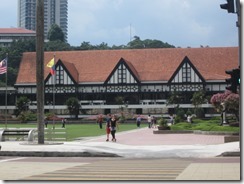 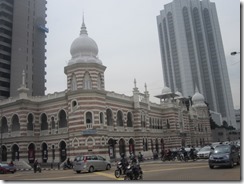 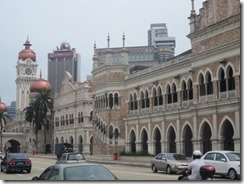 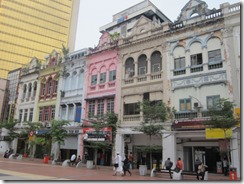 We have been to a lot of pedestrian-friendly cities, and too many pedestrian-unfriendly cities. KL merits an entirely new category–pedestrian impossible. The central parts of the city, such as around the Golden Triangle and Merderka Square aren’t too bad for walking. True, sidewalks are uneven and have some dangerous holes, but that seems to be the norm in many Asia cities. One has to continually be looking down while walking. Crosswalks and walk signals are very infrequent and usually ignored by drivers and motorbikes. Pedestrians need to always look out for drivers who think they have the right away even when the pedestrian has a cross walk light. And since most streets are three lane one-way or six lanes two-way of constant, high-speed traffic, crossing is a high-risk proposition even with lights. OK, so far, this seems somewhat normal for Asia.

The real problem comes when you venture out of the primary pedestrian areas, such as around the railway station or worse yet, the National Museum to which we tried to go, but were forced to turn around no matter how we tried to get there. Sidewalks were scattered and crosswalks nonexistent. Worse, you can follow a sidewalk for a couple hundred meters only to find that it stops at a wall, or a busy expressway, with no way to get by. When you’re lucky, it ends at a retaining wall or a fence that is possible to scale (as many people do) or where someone put a chair you could jump onto to get down. in one case, we walked a sidewalk until it came to a construction side, with the only way of proceeding being to walk far to the side of the left lane of a busy expressway that had no shoulder. More than once, we had to jump on top of a 3 inch wide concrete slab to stay out of the way of traffic. In another, we did manage to find a retaining wall that we could scale, only to arrive in a building complex in which the only exit took us a hundreds of meters in exactly the opposite direction. Walking is so much fun in KL…not!

What about a cab, you may ask? Exactly our thought. The problem is that most cabs refuse to use the meter. If you don’t agree on a price in advance, they will demand an outrageously fee upon reaching your destination. If you do try to agree on a price, they will charge you three or four times what the meter would have been. And if a cab does charge by meter, they never go straight to a destination. Given the street configurations, it is clear that the best way to get to a destination is almost never a straight line. And the system is so confusing that we have no idea if the route the driver takes is required, or if they are just running up the meter.

Not even taxis from hotels are safe as we discovered that the cabs from the hotel had a larger start amount and their meters ran faster than taxis on the street. Yes, they were nicer taxis and it didn’t matter much for short distances. But what really was frustrating was when we were going to the airport. The concierge told us the hotel would charge $50 to book the ride or we could take a taxi with a meter for about $40. When we went to the taxi stand, the lady behind the taxi counter insisted that we pay the $50 fee, telling us that is we used the meter, it would cost us more. The taxi had its meter on anyways, and guess what? The woman lied as the meter was about $9 less than what we paid. For a hotel like the Shangri-La to have people lying about pricing is not acceptable. Shame on them.

But one thing that KL did have was dummy traffic officers waiving signs like slow down or caution. As traffic cops normally wear face masks and helmets, these dummies looked very real until you caught on or got close. We also liked the university’s rules for unacceptable fashion statements which seemed to target women more than men. 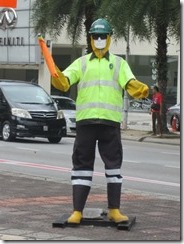 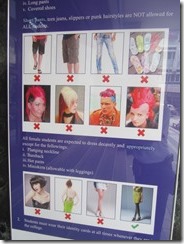 KL is renowned for its cuisine. We were intent on sampling different retakes on classic Malay food:

Enak KL. A Malay restaurant located in one of the city’s many shopping malls. We sampled three appetizers and an entree. The appetizers were:

We followed this up with an Udang Lemak Merah entree that consisted of prawns (although hardly a "giant" size for which we paid a premium price) in a cream sauce with candlenut,herbs, lemongrass and chili,over coconut rice. (While Joyce found this dish too spicy for her taste, Tom felt the spice was very mild and worked well with the dish. He enjoyed it.)

Madam Kwan. A perpetually filled restaurant of Malay cooking in the very upscale Petronas Mall. We had two Malay specialties:

Zipangu at the Shangri-La Hotel. Okay. We planned to eat only Malay-influenced food in KL, bit circumstances changed. First, we returned from our day trip to Malacca much later than we had planned–too late to go out for dinner. Second, one of the restaurants in our hotel had a special promotion on Fugu, better known as puffer fish; this is a prized Japanese delicacy that we have never before seen available to eat (although Joyce was able to play with one while snorkeling thanks to our guide while Tom was too far away to enjoy this experience), the reason is that puffer fish skin and liver is highly poisonous. If not properly prepared, those who eat it will die. Preparation, in fact, is so delicate that only a handful of sushi chefs are specifically licensed to work with the fish. Our restaurant brought two of these chefs in from Japan and arranged for daily shipment of the fish during the month of November. We had no choice. We had to try it.

Fugu sashimi, we discovered, is a slightly chewy fish that has a taste between that of sole and chicken. Yes, the delicacy of sole combined with the rich taste of chicken. Expensive, but delicious. Along with the fugu, we had a very interesting Japanese seafood pancake (shrimp,calamari and fish with cabbage, baked in a pancake, topped with a Katsu sauce and slightly mustardy mayonnaise). Joyce had her usual Japanese dinner, Nabayke Udon. A very nice medium dry sake went particularly well with the Fugu. 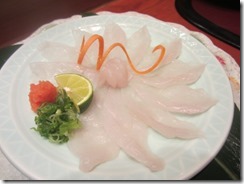 Pal Loh Chon Chow. Another detour from Malay food. We were tempted by their abalone, stayed for dinner and were glad we did. We began with a braised whole Australian abalone with oyster sauce. The abalone was large and perfectly done and the oyster sauce complemented it well. So well that we had to order some rice to sop up the extra sauce. When we ordered the abalone, our server also told us of a special where, for a small additional amount, we could get either sea cucumber fish mah (stomach) or French foie gras. Since we have had, and are not big fans of either of the seafood options, but love foie gras, we chose the later. A small love that was somewhat overcooked, but quite good nonetheless. And a bargain at US $3. We then had stir fried prawns and halibut with lily bulbs and water chestnuts. Another winner, even with an overly austere Chilean Sauvignon Blanc.

Jalan Alor Food Center. This is KL’s largest and most popular evening food center. Although we had just had dinner, we looked longingly at some of the seafood and satay dishes. While we resisted temptation, those that were eating appeared to be enjoying their food. Tom did make a stop for a light dessert at a stand that offered light puddings flavored with different fruits..chosing lichee, which came with a couple of lichees and small cubes of gelatin. While it looked compelling, it had very little taste. A rare Asian food market disappointment

Hotel Majestic Colonial Cafe. Majestic is absolutely the appropriate adjective for this beautiful hotel. Majesty is in evidence through the common areas, and into the cafe, with its colonial style waiting room and its Orchid Court private dining room. The dining room itself is dedicated to the fusion of cooking styles and tastes that resulted from British masters asking their Chinese cooks to produce the British-style dishes that they had come to miss. We had two such dishes for lunch:

Perhaps these dishes sated the colonialists: Neither dish (other than the richly-flavored rice) excited us. But come to think of it, we never were huge fans of traditional British cooking.

Ginger Thai Bistro. We didn’t expect to find a sit-down restaurant, much less good food at the touristy, but fun Central Market. But since our visit to the market coincided with a big thunderstorm, we gave it a shot, finding a sit-down restaurant next to a standard food court. We were pleasantly surprised. Although Joyce’s Pad Thai with chicken was rather pedestrian, Tom’s Sweet and Sour Prawns were quite good. Moreover, it contained ten good size (probably 16-20 count, in U.S. size) shrimp for RM 30. Even if you aren’t hungry, go for the mango juice alone it isn’t so much juice as it is a puréed mango. Thick, fresh and delicious. Not exactly Malay, but close enough in a thunderstorm.

KL Drinks with a View

There’s only one real view that we found in KL–that of (rather than from) the twin Petronas towers. Of course we had to get drinks at the best two lounge views of the towers: