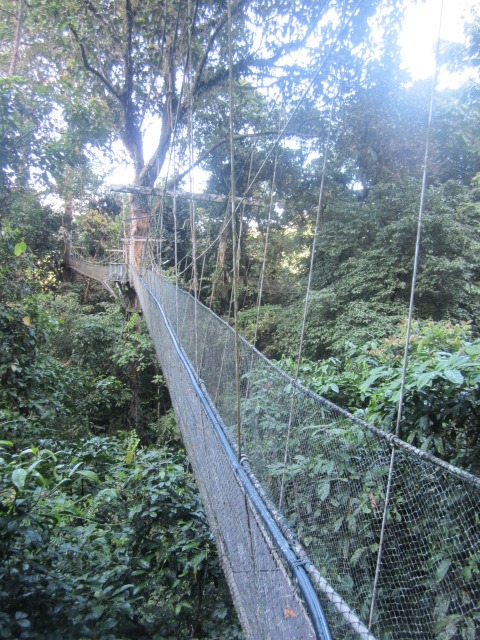 Guling Mulu National Park in Malaysia, commonly known as Mulu, is the jewel in the Malaysian national park system. It’s a tropical rainforest (receiving more than 15 feet of rain per year) with tall mountains, steep cliffs, dramatic, razor-sharp limestone pinnacles, a huge network of caves of all levels of difficulty, rivers to cruise, a tribal longhouse to visit and more than 20,000 species of animals and 3,500 of plants. Excursions range from boat rides on eight-passenger longboats and walk-through cave light shows to advanced spelunking and an incredibly rigorous, two-night camping excursion that requires rock climbing skills and a lot of stamina.

We chose a middle ground, with as many moderate activities as we could squeeze into two days in the park. These included a number of basic activities, such as an introduction into the park’s geology and biodiversity in the park’s engaging,wonderfully descriptive discovery center, a walk through the forest canopy along a half-kilometer skywalk and a birds-eye view of the forest and into the canopy from a 30-meter high observation tower. We walked a number of trails on our own and saw a few of the mountains, ravines and dramatic holes caused by the collapse of underground caves and the efforts of the jungle to retake the land. We also planned to participate in five additional ranger-led activities (rangers are required for entry into all of the caves).

Our first planned cave exploration was to be a four-hour tour of several stalactite- and stalagmite-filled chambers of Wind Cave, followed by a walk through part of the 36-mile long Clearwater Cave to explore the power of an underwater river that continually erodes and shapes the cave. This trek, however, fell victim to our unexpected Miri detour which cut a day from our trip to Mulu.  fortunately, we were still about to participate in four other delightful adventures:

Why would we put ourselves through such an ordeal? First to explore the huge caverns and the lovely stalactites and stalagmites of one of the largest limestone caves on earth. Second to end up where we and the other two couples on the hike THOUGHT we would end up– in the Garden of Eden grotto with a lovely 30-meter waterfall that plunged over a shear limestone cliff into a crystal-clear pond in which we would take a swim. But as we learned from our guide when we reached our actual destination, that was the destination of a nine-hour trip of the same name that was not available that day. While we did reach a clean pond, we elected to not even try to go into the water due to the rocks we would have to navigate in bare feet.

Still, we did enjoy the hike and our guide was one of the best nature guides we have had, pointing out, naming and explaining fascinating details about a number of beautiful animals (like the endangered, bright red-headed, phosphorescent green and black-striped wing Rajahbrooke butterfly) and less beautiful  animals (cave-dwelling blind catfish and giant blind cricket). Also, we exited the cave about 5:30; just in time to watch wave after wave of 2-3 million Wrinkled-Lip bats make their sweeping mass exit from the cave in search of eating two-thirds of their bodyweight in mosquitos (about 30 tons in total for all of the bats) that they will devour by sunrise and return to their cave to deposit more guano in anticipation of tomorrow’s hikers. Unlike other bats we have seen, these bats flew in an S shape line. 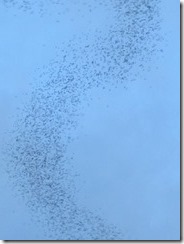 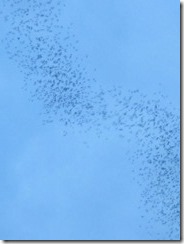 And then there were all the other fascinating rainforest facts we learned. For example:

While this made for a fascinating and very full two days, it was far from enough. Although it allowed us to do some basic splunkering (which we enjoy but are only out-of-practice novices), we would have liked to have done more, we would also have also appreciated if the description of our Langangs Cave splunkering trip explained exactly what was involved, so we could have prepared for it.

More regrettably, we were not able to get even a view of the rugged, geologically unusual Pinnacles section of the park–rugged, knife-like fractured limestone that are the remnants of large collapsed caverns. Seeing them requires a physically demanding, three-day, two-night hike that covers only 11.4 km each way, but the second day includes 1.2 km vertical assent with ropes required for part of it. And the descent is much more difficult, not to speak of dangerous than the ascent. Even if we had the gear and the time required for this expedition,we weren’t sure we would have been up to it.

However, the good news is that unlike Bako National Park, the accommodations were very comfortable and clean and the food was decent. Not great, but at least edible.