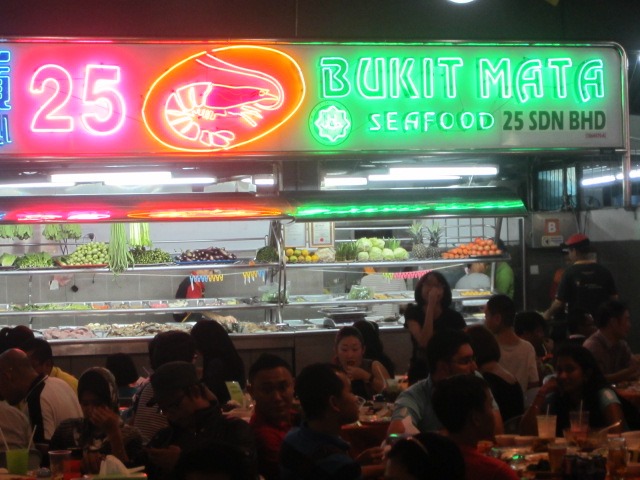 While in Kuching, we found some interesting and delicious food atop a parking garage. This isn’t anything new to us as we ate at, and thoroughly enjoyed Miami Beach’s Juvia last year. In fact, Tom and two friends once lived in a New Orleans parking gargle for a few days, but that’s a whole other story  Back to restaurants and parking garages…

TopSpot is a wonderful restaurant. But Kuching Borneo isn’t Miami Beach, the parking garage on which TopSpot is located certainly isn’t a star architect showpiece as in Miami, and TopSpot certainly isn’t a star turn for a renowned chef. It is, however, a wonderful group of restaurants which we highly recommend. TopSpot is actually about ten restaurants and is best described as a seafood centric food court in which all of the food is totally fresh, patrons select exactly the fish, crab or lobster they want, and one of perhaps six ways in which they would like it prepared.

While those that specialize in seafood have attractive displays of a large range of fresh fish and shellfish (and often vegetables as accompaniments), not all sell seafood. A few have other specialties,such as meat, satay and local Malaysian dishes. One even focuses exclusively on coconut deserts.

We were like kids in the proverbial candy shop. We didn’t know where to start. We chose Lung Loong Seafood (restaurant #6), starting with bamboo clams steamed in soy sauce and garlic (small, but very good), followed by barbecued stingray (underdone fish and overpowering sauce) and finished up with a delicious, steamed river crab. We rounded this off with a plate of steamed oyster mushrooms, baby corn and sugar snap peas. All this and a bottle of Wolf-Blass Chardonnay for about $40–with the wine accounting for over half the total tab!

So good, in fact, that we didn’t even consider going to another restaurant and returned the next night for more clam and crabs, and to try another fish and one of the coconut deserts.

When we returned, we  tried Bukit Mata Seafood (#25). Since our appetites were limited by a late lunch, we reluctantly limited ourselves to two dishes and vegetables: large stir-fried, garlic-ginger sea clams; followed by their specialty–a large ( over 2 kg) steamed river crab that was then pan-fried in slightly sweeten, roux-based salted egg yolk; accompanied by steamed oyster mushrooms, baby corn and sugar snap peas in a light mushroom sauce. Everything was incredible, with every dish,aided by the sauce. Combined with a bottle of Chilean Vina Maipo Chardonnay, this feast set is back less than $50, again with the wine wine more than half. Absolutely one of the most satisfying, best price/value restaurant meals we’ve ever had.

As if this weren’t enough,we stopped at the coconut stand for a fresh glass of coconut juice with strips of coconut meat and longon fruits. Again delicious.the price for this, less than $1 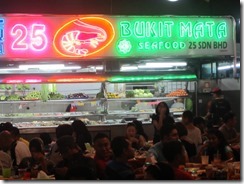 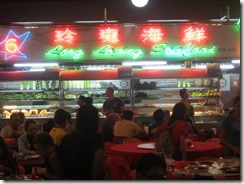 Doing Chinese In the Pullman Hotel

We were travelling during the rainy season and encounter pouring rain around lunchtime (plus TopSpot wasn’t open for lunch). So we decided to eat lunch at our hotel (Pullman). After a review of our dining options, we decided on its Chinese restaurant. After all, we hadn’t been in China for almost a month, and it would be another month since we would return to Hong Kong.

We began with two orders of dim sum: very good chicken and shrimp dumpling and pretty good, lightly deep fried (versus pan-fried which we generally prefer) pork Shanghai dumpling. We followed this with a "medium (versus large) order of Peking duck three ways. When we saw the half-duck come out, we were surprised to see that it all went into dumplings, which our server made for us. Then, a few minutes later, came a platter with four duck dumpling and stir-fried duck with ginger and scallion. We weren’t overly impressed. The duck, while crisp, was dry and lacking in flavor. We disguised this by adding more hoisin sauce to the dumplings. The dumplings, however, were in a rather bland broth and the stir-fried duck was a bit too heavy on ginger for our tastes. This being said, however, the service was excellent.

Our hotel in Kuching was the Pullman Hotel. It was very comfortable and a close walk to “downtown” and to the museums. The bathroom was very large with a nice shower, scale, toiletries, etc. Linens were soft and we had plenty of towels plus bathrobes. They even had wash cloths, which not all hotels have. The bed was very comfortable too. As a bonus, the hotel was right near a laundry and TopSpot. Even though their web site said they charged for wifi, they did provide free passwords for wireless in the common areas and in the room,