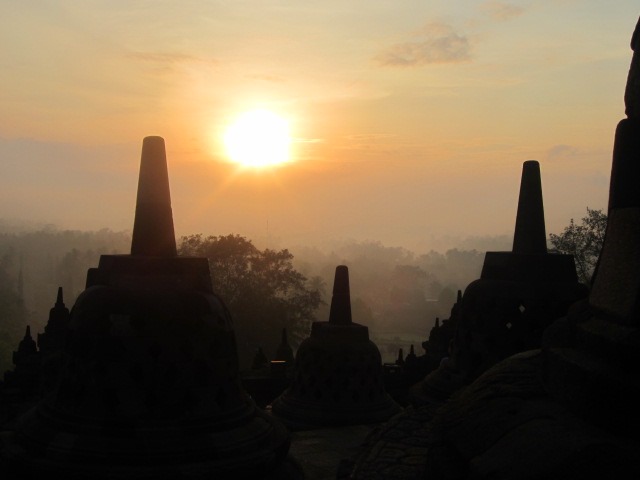 Our main reason for going to Yogarkarta Indonesia was to see Borobudur and the surrounding temples. We started the day at 4 AM for the obligatory sunrise visit to Borobudur, the largest Buddhist temple complex in the world.

It was built in the 8th century from more than 50,000, hand-hewn one-cubic meter stones (without the benefit of filler or adhesive). Although it is a relatively squat 110 feet high, it covers an area of almost 30,000 square feet–divided into nine terraces, plus a base, with each level representing a higher level of enlightenment, culminating in a giant Buddha. Its decorative 2,672 relief panels and over 500 Buddha statues, including 72 that surround the main dome were as impressive as the temple itself. And, since the panels explain the history and lessons of Buddhism, they were as important as an educational tools as it was a religious symbol. While the panels are eroded, and many are discolored from a long-ago photographer who used a chemical on them to “enhance” his photographs.Still, you can clearly (at least with the help of a guide) trace the story of Prince Sidharta’s birth and evolution into the first Buddha, plus many of his teachings

The temple is impressive–even at 5:00 AM when we arrived.  Although we did get some pretty sunrise views over the valley, the greatest advantage offline at this time is that it is cool and the sun is not beating on you from overhead. 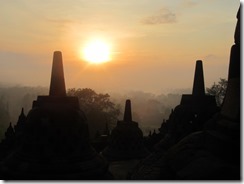 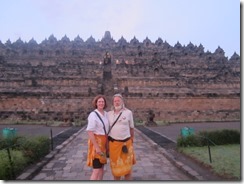 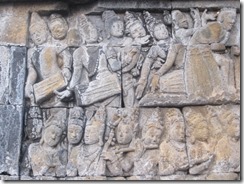 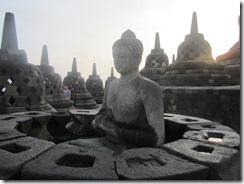 Although Borobudur is certainly the highlight of the area, it is not the only Buddhist temple in the area. It is, in fact, the last of three much smaller 8th-century Buddhist temples that pilgrims took on a route to Borobudur. The first two stops being;

The primary objective for visiting Yogyakarta was to visit Borobudur. Prambanan was a distant second objective. Although we certainly enjoyed Borobudur, Prambanan turned out to be the highlight, at least for us.

Just as Borobudur is the largest, and one of the most beautiful Buddhist temples, Prambanan is one of the largest and most beautiful Hindu temples. This site, built in the 10th century, consists of three primary temples. The tallest (160 feet), most striking and largest is the central tower devoted to Shiva which, due to partial restorations from an earthquake, required a hard hat. The Shiva temple has three chambers. The main chamber,which was still closed, has a statue of Shiva. The other three had smaller chambers dedicated to his wife Uma (aka Parwati), his elephant-headed son Ganesha and Maha Guru (the High Teacher), who is one of Shiva’s manifestations.the temple is surrounded by panels that tell epic Hindu stories, particularly that of Prince Rama, a reincarnation of Vishnu who returns to earth. 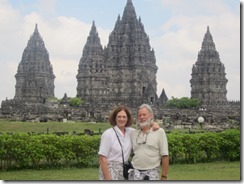 Some of the smaller, surrounding temples in Prambanan’s main complex, such as Garuda (formed as a half-man, half-bird creature), were almost as interesting. Just outside the walls of the main temple are a couple smaller, reconstructed Perwara temples and, as well as the not-yet reconstructed remains of 218 others which surrounded the complex.

As if Prambanan weren’t impressive enough on its own, the site also connects three smaller, somewhat older sites that can be reached by tram. Bubran Temple is still little more than a pile of rubble. Lumbung is in modestly better shape. Don’t however, stop after these. Sewu Temple, at the end of the tram route, still requires a lot of work. It, however, is majestic as it is. The main temple, about 65 feet across and 65 feet high,casts a striking figure, especially as surrounded by the tumbled remnants of 240 surrounding Perwara temples. Guarding each of the four entries into the temple are pairs of guardian "dwarapala", statutes of stocky men carrying big clubs.

Although Borobudur and Prambanan are certainly the highlights of the area, many other temples and the remnants of one huge palace are also in the area.These include: 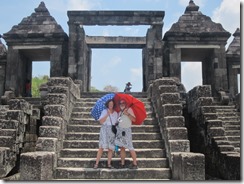 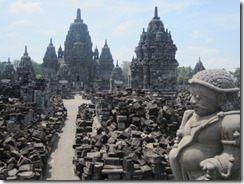 All in all, a very full day of temple sightings and well worth the trip. BTW, if you are wondering about the various “skirts” we are wearing in the pictures, no, we were not going native. Each temple requires visitors to wear them as a means of respect. The color depends on the temple.