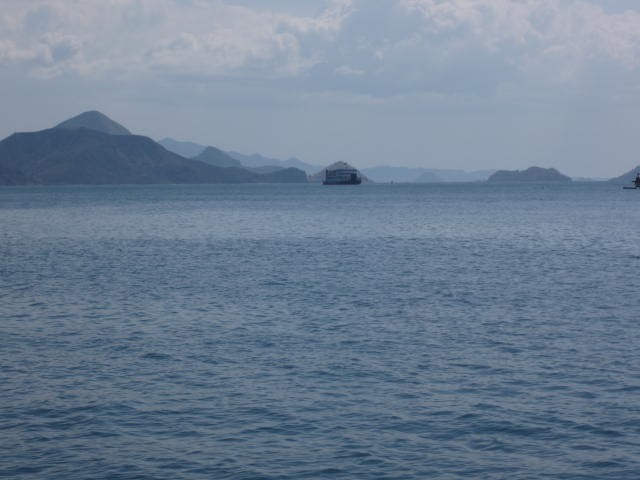 We have long read and seen photos of the huge, fierce Komodo Dragons, the largest lizards that are capable of devouring pigs, or should the opportunity arise, young children (fact or fiction? who knows?). We had our first glimpse of the famous lizards, and a huge range of of the indigenous reptiles and birds, at the Bali Bird and Reptile Park in Indonesia.

But, seeing the dragons in a zoo is one thing. Seeing them in their own natural habitat is quite another. So, since we were only five islands away during our visit to Indonesia, we decided to take a detour to Komodo island. This, as we discovered,is no mean feat. It requires numerous plane and boat transfers and a two night trip. We flew from Ubud into Flores island and boarded a boat to Rinca Island (one of the two islands open to the public where the dragons reside) where we were to explored for dragons and spent the night on our private boat (which had been converted from fishing to tourism), before heading off for the main show on Komodo Island.

The trip got off to an auspicious start. Our plane was an hour late, and just after we cast off for the water portion, our boat’s propeller became ensnared in a rope,which a swimmer had to remove. By the time we got going, we had missed the tide window for Rinca, which meant that our boat ride would take 2-3 times as long than if we were flowing with the tide.

After a short one-hour voyage,we reached one of thousands of small, rugged, volcanic islands in the archipelago. Most of those we saw and visited were rather bleak, with jagged, eroded volcanic rock with a thin layer of tough grasses and occasional trees. The shorelines consisted largely of shell-encrusted rocks, with sporadic beaches consisting of dead coral and shell fragments washed up on shore. Some of the larger islands, around which sufficient volumes of organic material had accumulated, sported dense mangrove forests,struggling to create rich new land. 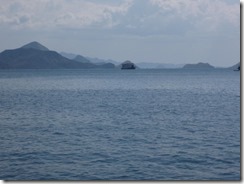 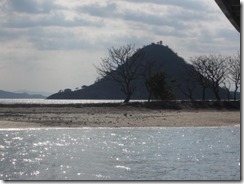 Our first stop was a small, volcanic island with a small beach. After a brief walk along the beach and an exploration of the rocks, coves, coral and shells, we made ou way to Kalong Island to see the evening emergence of thousands of huge fruit bats (with the 30-inch wingspans from their caves to more verdant islands (especially Flores) to devour their daily intake of tropical fruits, and to our surprise, coffee beans. (Well, they do pull more than their share of all-nighters.). Joyce is always happy to see something eating mosquitos as mosquitos love her.

Following a not-so-comfortable night’s sleep in our hot cabin (we originally had a double bed in a tiny stuffy room until Joyce said it wouldn’t work. They then gave us separate “rooms” with tiny beds so we could at least breathe in our tiny rooms),  we set sail at 5:40 AM for Rinca Island–and then to Komodo Island–to catch up with at least a few of the 5,500 dragons that are left in the world (not to speak of the birds, deer. wild pigs and water buffalo on which they prey). We took a 2 hour ranger-guided walk on both islands. Although we certainly saw enough dragons, including a couple that were walking at a pretty good clip, our visits were generally during the lizards’ downtime, 6:30-8:00 AM, when their body temperatures are just beginning to warm up, and 11:30-1:00, when its too hot for much action. We did not get to see them hunting or devouring their prey, the beasts were as impressive as we expected them to be and the guides’ explanations were fascinating. 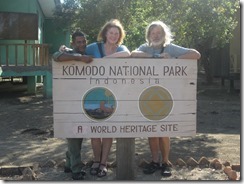 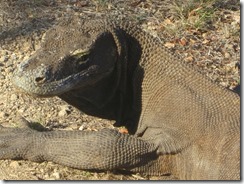 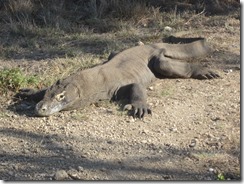 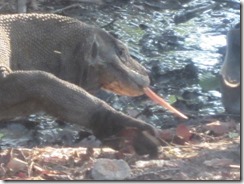 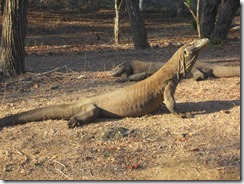 Consider, for example, that these apexes of their native food chains are indigenous to only four islands in the world–islands that were once connected. Fossils suggest that the species originated on yet another island (on which they no longer exist) to which these islands were once connected–Australia.

The reason for Komodos’ limited range is that  they are cold-blooded. This limits their swimming range to about 500 meters, even in this region’s relatively warm weather. But even if they were to reach another land mass, their limited mobility at night, early mornings and in cool weather would make them vulnerable to warm-blooded carnivores, even those that are much smaller than the dragons.

Let’s start from the beginning of the dragon’s lifecycle. Dragons mate in June and July and females lay eggs in September (in the nests of wild chickens whose eggs they eat, before they lay their own). They then protect their nests for the next three months, both by guarding them and also by digging decoy nests to confuse potential predators. If the eggs survive until rainy season, the nests are flooded and the eggs remain safe until they hatch. eight-to-nine months after conception. The babies, which are typically about 32-to 35 cm (females are smaller) then face another challenge. Hungry adults, including their own parents, are often waiting to snap up the defenseless babies. Those that survive these challenges climb trees, living primarily off smaller tree lizards and birds for two or three years, until they are large enough to fend for themselves on the ground.

As is the case with other reptiles, the ratio of males-to-females varies by nest temperature, creating an imbalance of about three- to-five males per female. This leads to fights in which the dominant male impregnates more females than the others.

Dragons are typically opportunistic feeders. Although they can run at up to 18 km/hr in short bursts, they don’t typically hunt or stalk. Instead, when they are hungry, they often wait, camouflaged by their natural colors for their prey to come to them. In the dry season, they typically wait by water holes, to which all animals must pay visits for survival. In the rainy season, when water is everywhere, the dragons take a different tack. They will typically wait either by the ocean, or near the top of hills, where deer, in particular, seek to escape the ubiquitous mosquitos.

Dragons will devour small animals, like macaques and chickens whole (tail first) and digest them gradually. For larger animals, like deer, or water buffalo (big water buffalo) , they bite them, inject them with poison from 50 different types of bacteria in their saliva, and then follow them for up to a week waiting for them to die. And since other dragons can smell blood (not with their noses but with their tongues, like snakes) from up to a kilometer away, the killer often has plenty of competition at feeding time.

When they do feed, they devour, eating 70-to-80 percent of their body weight in one sitting (assuming they can keep this much from competitors). They begin with the more nutritious organs, then attack the muscle, and even the bones. They will devour everything they can–typically 80% or more of the total victim’s weight, leaving little more than skulls. (The remnants of the calcium from the boneds are often found in the dragon’s scat; evidenced as a white powder.) it is not uncommon for a pack of dragons to consume a water buffalo in a single night. Although the dragons will take free food when they can get it, they actively search for food only when they are hungry–up to a month after their previous full meal.

Komodo Dragons typically live 30-to-40 years and some up to 50. This, of course, assumes that they have sufficient food and water and that they are not killed and eaten by other dragons (yes, it’s a dragon-eat-dragon world out there). Males on Rinca can grow to a maximum of about three meters, or 9.5 feet (2.5 meters for females). Due to the abundance of food on Komodo, adults often grow longer (3.5 and 3 meters for females) and can weight more than 100 kg (about 220 pounds).

What about the stories of Komodos’ attacking people? This clearly occurs. All guides carry pronged sticks that are used to keep feisty dragons at bay. There are also some documented accounts. Four adults, for example, were attacked and bitten in 2013, although they were evacuated and received treatment in time. In 2007, an eight year-old native boy, defecated in the forest. A nearby dragon, picked up the scent, bit and ate the boy, leaving nary a trace. There is also a story of a tourist who was separated from his group and disappeared. While searchers found a few remnants,such as a camera, some remain skeptical that a full-size man could have died so quickly without leaving trace of having survived for at least a few days. But hey, huge water buffalo disappear, why not men?

However fascinating the dragons are, Komodo Island has more than dragons and their prey. It also has 19 species of orchids and 128 bird species. Although we did see a lovely yellow oriole and heard a cockatoo on one of our hikes, we had much more luck finding dragons, water buffalo, wild chickens, macaques (on Rinca, but not Komodo)–and especially deer, than we did in seeing exotic birds. That’s why we went to the Bali Bird Park! (See our Ubud Village blog.) 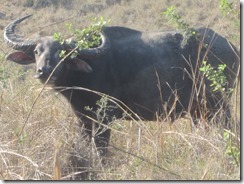 Komodo also has its share of underwater wonders. One corner of the island, the suitably named Pink Beach, has some of the best snorkeling in the region (see blog on Snorkeling off the Indonesian Coast). Although not the most brilliant colors, the parts of the reef in shallower waters–roughly one-to-four meters–has some of the most dense, most varied, wall-to-wall coral we have ever seen.