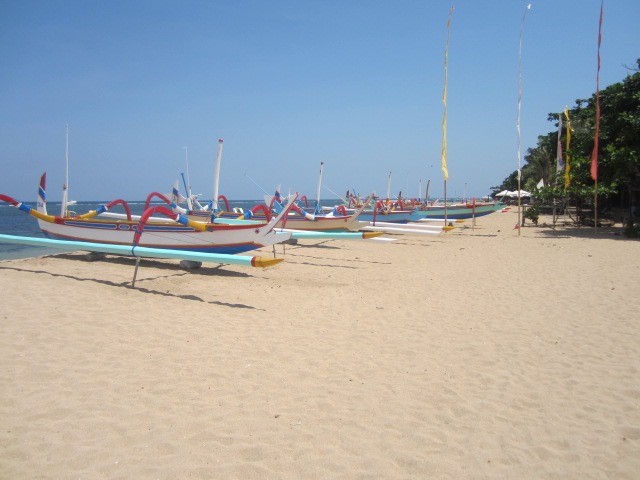 An Afternoon on Sanur Beach

Since we were going to be on Bali anyways, we thought we should at least explore the beaches, the clubs and to pay our respects at the site of the 2002 terrorist bombing at a hotel on Kuta Beach that claimed more than 200 lives.

Our time, however, was very limited. Due to the vagaries of airline schedules, we ended up having only one afternoon and one evening to explore the beach area. We stayed at Sunar, or Sunrise Beach, the more sedate alternative to the more popular, more lively nightspot of Kuta, or Sunset Beach. From hindsight, even an afternoon was more than enough time for an impatient, never sit-still couple like us. Sure it was pretty, but how much ocean and fine white sand beach can one take.? How many beach bars can we frequent or pools can we wade or swim in? How many similar beach restaurant menus can we peruse and how many palm trees can we it under?

Okay, we aren’t beach people. This being said, the lovely, temple-themed Tanjung Sari resort was beautiful. The statue- and frieze-adorned walkways were indeed reminiscent of temples and the rooms, each with private outdoor sitting areas and showers, were charming and comfortable. The hotel also sponsored an early evening reception,with drinks and Indonesian-Style canapés, at which guests could meet each other and key members of the hotel staff. And if you get tired of the beach, the street on which Tanjung Sari and other Sunar Beach hotels are located, also has a number of interesting shops, restaurants and bars.

We were also lucky enough to have stayed the beach on Monday, one of the two nights per week on which the neighboring hotel restaurant has a barbecue on the beach. You can chose among a wide range of steak and seafood dishes by the gram (actually by 100 grams), selecting and mixing and matching among as many custom-ordered dishes as you want. (Appetizers and side-dishes are available as a buffet.) This gave us a chance to taste number of different fish and shellfish (local clams, garupa (grouper we think), giant river prawns and lobster) and select the sauce we wanted with each.

The beach setting provided a great atmosphere which was only partially diminished by the syrupy,”beach romantic” music. 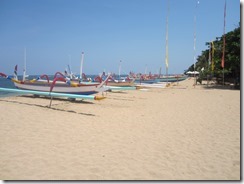 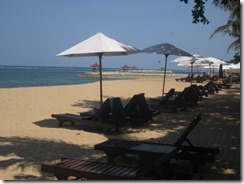 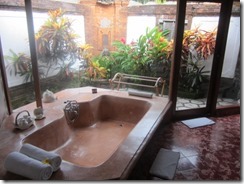 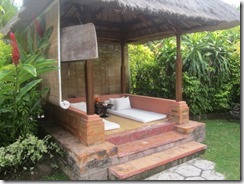 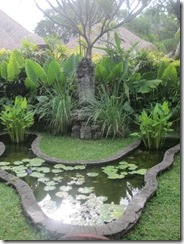 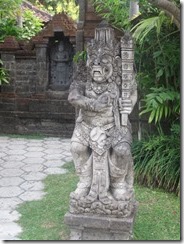 Snorkeling off the Indonesian Coast

Our plan, from the very beginning, was to capitalize on some of Southeast Asian’s best snorkeling spots. On a previous trip to Asia, we scuba dove off a couple of Thai islands and found them less than exciting. Since we missed the season for snorkeling trips off the northern coast of West Malaysia (the north shore of Borneo) and the eastern coast of the Malay Peninsula due to heavy winds and strong currentsu, we “settled” for a couple snorkeling excursions of the coast of Indonesia:

The first Menjangan Island spot was Underwater Cave, on the rim of one of the area’s premier wall dives. We were treated to a wide array of hard corals (primarily greens, yellows and some blues) and all types of reef fish, of every imaginable color—including the ever-present sergeant majors and parrot fish. We also saw large numbers of lovely angel and butterfish and a particularly lovely bright yellow fish with turquoise stripes that we had never seen before. We also ran into a few needlefish that were so large that we were convinced they were barracuda.

Although this spot was lovely enough, our next stop–Coral Garden–was even more beautiful. This spot had much the same type of hard coral as Underwater Cave, but included more brilliant reds, yellows, blues and brownish oranges. It  also had some feathery soft corals that waved with the currents and hid tiny, colorful clownfish. Thanks to our snorkeling guide, we had a chance to gently touch some bright blue starfish, pufferfish and a very unusual, lovely spider coral fish, which, with its long, arms, multiple colors and tiny, slightly sticky barbs, we would have mistaken for a plant, rather than a fish.

We also saw more pelagic fish at this location. In fact,toward the end of our snorkel, just in the shadow of the island’s lovely Hindu temple, we found ourselves swimming in the middle of a large school of what our guide called mollucks, rather undistinguished grey fish between 12- and 18-inches long. While the fish themselves weren’t all that exciting (at least compared with all the beautiful reef fish), it was rather fun swimming in the middle of the large school, with fish rather oblivious to our presence. Not the same level of experience as being accepted as a member of a pod of sentient dolphins off the coast of Lanai Hawaii as we were a few years ago, but not bad.

Our third and final snorkeling stop of this trip was at Komodo Island’s suitably-named Pink Beach. Although we never made onto he actual beach, the coral off its shore was extraordinary. When we first entered the water from our boat, we were apprehensive as we only saw large patches of white sand and much of the coral that we did see was bleached our dead. That which was healthy was very muted shades of green, brown, orange and white. But our disappointment turned almost to euphoria as we moved toward the shore into one-to-four meters of water. While we still found few of the brilliant reds, blues and yellows of the Caribbean’s Bonaire or the Great Barrier Reef’s Lizard Island, the density and the range of the coral–all types of hard, soft and some large beautiful fans–more than made up for the limited range of hues. As for fish, there were some, including some lovely angels, clownfish and butterfish, and the yellow and turquoise-striped beauties we saw off Menjangan Island. Not a huge selection, but enough to make us feel in the presence of profound natural beauty.

Overall, three for three for snorkeling. Three of the more memorable of the snorkel and dive sites we have visited. Then, flying back from Flores to Bali island–and seeing the coral halos that surround many of the small island, we were almost tempted to return for more.

There are, however, still too many new underwater worlds to explore. After all, we haven’t even begun to visit the South Pacific’s most renowned sites. 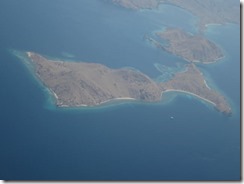 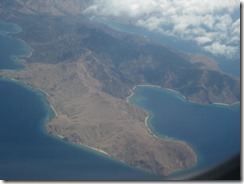 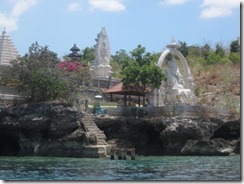