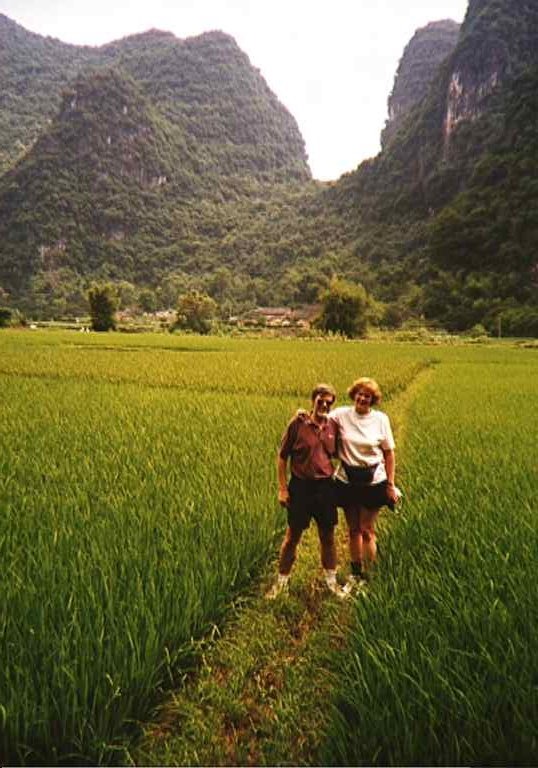 At the end of our cruise down the Li River, we landed in Yangshow, where we planned to stay 2 nights.

When we were last in Yangshou China  15 years ago, it was small, quiet, rural, quaint market town with one short major dirt street (Xian Jie) lined with a handful of primarily local shops, tourist shops and restaurants. It is no longer quiet, rural or quaint and the main street is now called West Street. We first realized things had changed when we asked for directions to our hotel: "Go up West Street, go right at KFC and right again at McDonalds." When we arrived on West Street, the changes hit us full force.

The street is now flooded with cheap knockoff and souvenir stores. When the stores run out, the alleys filled with temporary booths, tables, and clothes racks–anything on which an aspiring vendor could display cheap merchandise. The end of West Street is filled, wall-to-wall with dozens of restaurants, all of which look the same and sell the same mix of Chinese and Western food–all of which specialize in the town specialty, "beer fish" (which is actually quite good, although as someone told us, it is hard to mess up beer fish).

Although virtually all tourists to these parts take the cruise from Guilin to Yangshou, the vast majority, after a brief walk along West Street and bus tour of a few of the nearby sights, hoop a bus and return to Guilin for the evening.

On our previous trip, we spent an extra day in Yangshou. We met a young lady who we hired to take us on a full-day bile tour past amazing karst mountains, though local farm villages, past the lovely Moon Hill (a karst hill that has a round hill near the top that, depending on your angle of view, represents different phases of the moon), across rivers on bamboo rafts through a subterranean cave, to her village where she cooked and served up a delicious homemade lunch at her home. As we recall, it was one of the best meals we had in China. It was also one of the three most memorable days of our entire lives, along with:

As you can see from the pictures, we were much younger at our last visit to Yangshou. And our guide didn’t even reach Joyce’s shoulders. 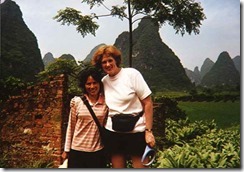 We weren’t too surprised, or excessively dismayed by the changes to the town. After all, we didn’t revisit Yangshou for the town, we visited it for their credible scenery.

Rafting down the Li River

Although we intended to climb one of the town’s many karst mountains on our first afternoon, it was far too hot and muggy to think of such a venture. So we did something as far from a hike as we could imagine: We took an hour and half cruise in a “bamboo” raft (well, they used to use bamboo, but this raft looked like plastic tubing), further down the river on which we arrived. Just the two of us (with our pilot), lounging on reclining wood chairs, taking in the cool breeze of the river (while was so welcomed during the very hot day) and the stunning scenery.

While the raft was certainly pleasant, we planned a somewhat more active re-acquaintance with the Li River landscape. So our next stop was to a shop where we could either arrange a tour or rent bikes. When we inquired about our previous route to Moon Hill, we we told that the route was now so popular that it was probably not a good idea. (Last time, we did not run into other tourists the entire day.) The shop, however, recommended another longer, much more rural route that would,like our previous trip, take us along a river and through tiny farm towns.

We took this trip the next day, heading west, from Yangshuo, about 25 miles (at least with our accidental detours since it was impossible to follow the directions we were given) up the eastern bank of the Yu Long River, through small mud brick farm villages, past bathing water buffalo and along rice paddy trails. While the towns were larger and more developed, and the electrical lines far more numerous and visible than in the past, the scenery, across the river and the farms and paddies, to row upon row of irregularly shaped karst mountains were as beautiful as we remembered. 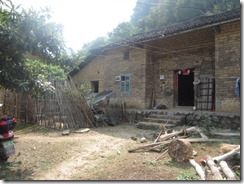 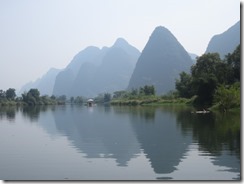 Although we passed many very tempting bamboo rafts being poled down the river, and fought off dozens of offers, one persistent saleswoman eventually earned our gratitude and our business by guiding us through about 10 km of confusing trails to the river town of Yu Long Qiao and fixing Joyce’s entangled bicycle chain. We think her job is to bike along the “official tourist bike trail” and work on people to enlist them to take a bamboo rafting trip. After a beer at scenic waterfront bar and restaurant, we and our bikes boarded a small bamboo raft (a real bamboo raft this time) about the same time as another couple was taking their wedding vows on a similar raft. After about an hour of being poled downriver (unlike the previous day’s ride which used a motor), through and over three small waterfalls, through gorgeous scenery, it was back on our bikes for the final, equally lovely leg of our return journey. It was a very relaxing hour’s journey through incredible scenery. 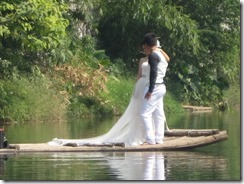 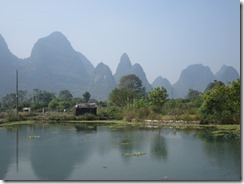 After six hours and a total of about 50 km of biking (on thankfully level ground)–and a one-hour refreshing cruise, we returned to Yangshou, ready for long cold showers and another very well-earned drink.

Cloud Nine was our first Yangshou restaurant of this trip. All we know was that it was not located of the strip of "look-alike West Street restaurants, that it looked interesting, had a good crowd, had a menu translated into quasi-English and offered a number of types of beer fish. We ended up very pleased. The swordfish-like (while the consistency was like swordfish, it didn’t have the strong flavor that swordfish has) beer fish dish (with tomatoes, ginger, garlic and a delicious sauce) was very good,and very reasonably priced. With many of the tables around us requesting and apparently enjoying something that looked like large snails, we asked for some. They turned out not to be snails at all, but ground pork (we think), stuffed in snail shells and served with another delicious sauce. Although we don’t know exactly the food we ended up having, we do know that we thoroughly enjoyed the meal.

Riverview was our second and final restaurant in the town. The atmosphere and view of the river and mountains were wonderful, but we were a bit disappointed in the food. Tom planned to reprise his first ever meal in town from our first trip–snake. This, however, proved to be more difficult than expected. Although snake was on the menu, they had to go out and buy the snake before they could prepare it. So, we decided to exit this trip as we began it–with beer fish. Although prepared in the same basic way (steamed beer with tomato, pepper, ginger, garlic and sauce) this preparation had less fish and the fish had far more and bigger bones than any river fish we had ever had. It was also rather light on the tomatoes and the sauce a bit to strong for the preparation. Oh well, two out of three (we also had beer fish on the Li River) isn’t bad. Go for the view, but realize the food is only so-so.

Wine in China is not like wine in the US. Here, you get what you can get. Pricing is very expensive. $10 wines in the states is $30 in China. But we did finally managed to taste a few additional Chinese wines that were OK. Three Great Wall wines: the Chardonnay, Cabernet and to a lesser extent, the non–identifiable (Riesling and Pinot Blanc are our guess) White Wine were all drinkable, albeit not particularly interesting or complex. The same was true for another brand, the Cgangyu Red. This was, however, more than we could say for the Great Wall generic Red, which is what they normally serve in tiny glasses at high prices.

Our other objective was to score tastes (albeit not entire bottles) of the local rice wine and Osmandus White. This proved more difficult than  expected as none of the restaurants or lounges we visited even offered them by the bottle, much less by the glass.

Not surprisingly, most of our China meals were accompanied by beer, typically Tsing Tao, and in and around Guilin, Liquay. As Joyce is not a huge fan of beer, she will be happy to find wine again.