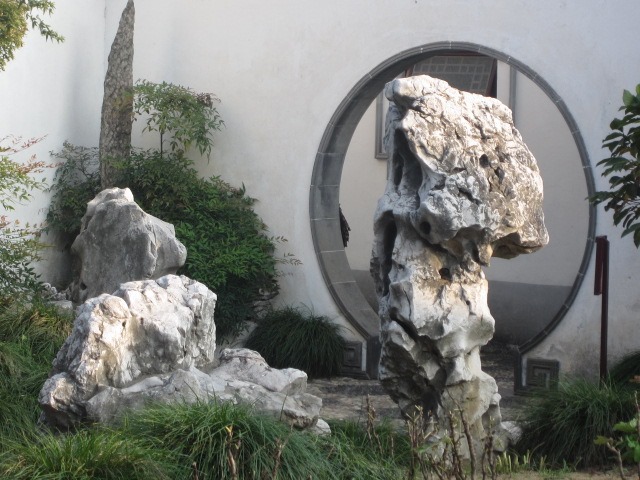 Suzhou was another destination of our previous China trip to which we wanted to return: not to see how it changed, but hopefully to see how it had remained the same.

Our first exposure suggested that our hopes were not justified–especially during what we now regard as the dreaded Golden Week. The traffic was horrendous. The cab from the railroad station, which should normally take about 15 minutes, turned into almost an hour. The few sights that we passed, including the Suzhou Museum, which we hoped to visit had lines that stretched around blocks.

The good news, is that we were able to get into all three of the World Heritage Site gardens on our list (although not the Museum). We visited the:

• Humble Administrator’s Garden. Which is the most centrally located and generally considered to be the most beautiful of the major Suzhou gardens;

• Master of the Nets Garden, one of the smaller, but also one of the most classically designed; and the

• Lingering Garden, one of the largest and most diverse.

All three shared most of the common elements of a Chinese garden. They were built around asymmetrical designs that were intended to emphasize the natural beauty of nature and harmony between man (in the form of classically designed buildings with wooden furniture and porcelains) and natural features. They were all built around naturally eroded rocks (often installed into small mountains and topped with small classically roofed viewing structures), ponds, grass and trees, often including old, lovely bonsai trees and bamboo forests. 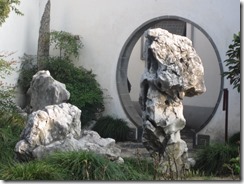 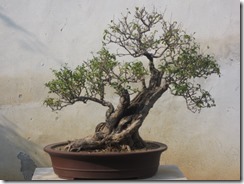 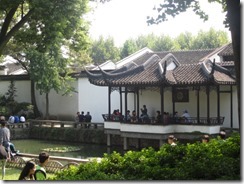 Although each of the gardens had its own beauty (not to speak of many people), we had one hands-down favorite–Lingering Garden. We thought that the rocks were among the loveliness and that they were organized in the most evocative ways, particularly around a lovely pond. The buildings furnishings were also the most interesting–particularly the office of one of the old residents. The most fascinating feature, however, was the huge, incredibly diverse selection of bonsai trees. And it certainly didn’t hurt that the garden, which is the furthest of the three from the central city, had the smallest concentration of people. This allowed us to experience some of the tranquility that was impossible in the packed Humble Administrator’s Garden.

Although we walked through a number of neighborhoods, we reserved particular time to stroll through the lovely, well-preserved old town area. Ping Jiang Road, the 1,000 year-old pedestrian alleyway (which is also shared by some very patient motorbike riders) is lined by a canal on one side and hundreds of traditionally styled buildings. It is especially fun, with its lovely shops and food stands. 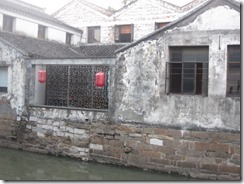 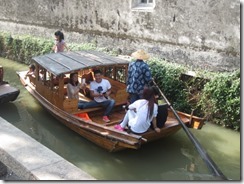 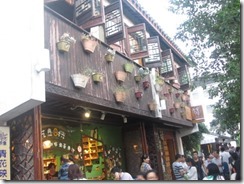 Before moving on, we have to mention our hotel, Pingjiang Lodge, which was originally a country mansion for a family in the Ming Dynasty, with rooms decorated in traditional style, but still with modern conveniences such as a TV, internet, and air conditioning. The traditional bed has one exit, making it difficult for the inside person to get out to go to the bathroom at night. So Joyce opted to sleep on the couch which was as comfortable as the bed and allowed more freedom. Although the staff spoke little English, it is still a great place to stay if you dislike cookie-cutter hotels. Just bring Google translator. 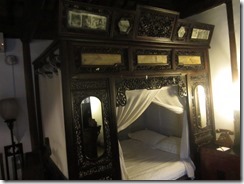 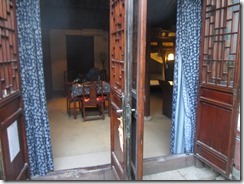 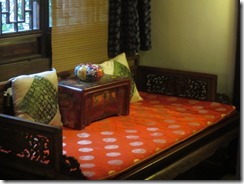 A Visit to a Water Town

After a day exploring Suzhou, we wanted to explore one of the area’s ancient World Heritage Site water towns. These towns, like Suzhou, grew along the roughly 1,100 miles of canals that were built (beginning gradually, then greatly accelerated) between 500 B.C. and 1,400 A.D. to connect populous northern China with the agriculturally-based south. But while Suzhou grew into a reasonably good-sized city, some of these towns, such as Zhouzhuang and Tongli, remain relatively small (at least for a Chinese city).

We took a 45-minute bus (each way) for about an hour and a half visit to Tongli. The old town, laced with canals, spanned by dozens of arched bridges is indeed quaint. Even on a rainy day, the canals hosted a steady stream of oar-powered tourist boats and a few boats with fishing cormorants (of which we will see many, many more on our trip to the Li River). The banks of the canals were lined by row after row of small restaurants catering to the tourists. 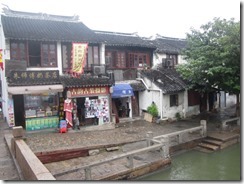 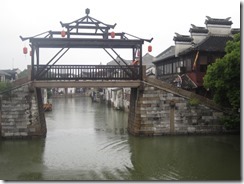 A short trip which, all in all, probably wasn’t worth the time or the effort. It was, however, good practice for our visit to another remote World Cultural Site (Huangshan Mountain), in which we will have to negotiate tight train and bus connections in towns in which virtually nobody can understand or speak English and where we not only can’t read the signs, but even comprehend the symbols. Thank God for Google Translator!