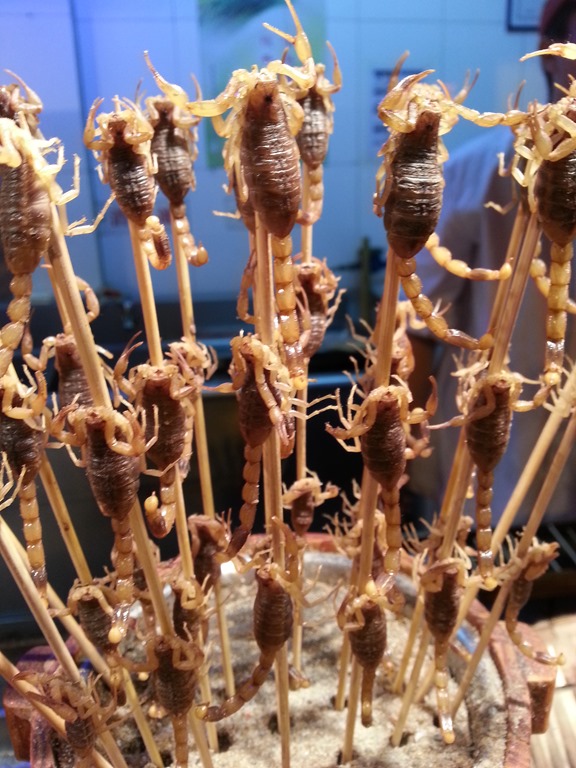 Beijing has a a lot of “fast food”. Yes, it has McDonalds, KFC, Burger King and their own local fast-food restaurants. But it also has a preponderance of street fast food–vendors selling items grilled on sticks that people can eat while walking down the street. Some are targeted strictly at tourists, such as scorpion, sea horses, star fish, cocoon, beetles and spiders on a stick. And, yes, the scorpions were still moving—at least until they were put on the grill. Being more adventurous than Joyce, Tom tried the scorpions while a crowd of people watched. He said it tasted like something fried but one couldn’t distinguish anything else. 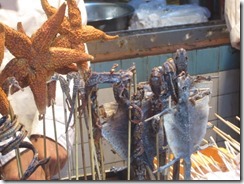 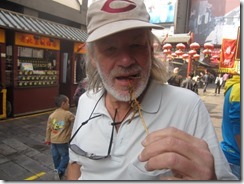 Then there is the stuff that the Chinese eat such as tripe and chicken or meat on a stick, grilled corn, dumplings, roasted chestnuts as well as soup bowls (similar to what we have in the US).

While many Chinese are content eating their meals while walking down the street, we generally prefer sit down meals at restaurants that have menus with pictures of food so that we know what we are eating (most also have English subtitles). Many of these types of restaurants catered to tourists. Some will say the food is better and some will say it it not. But we were tourists, so why not. Being in Beijing, we had Peking Duck 3 times (although it is called Roasted Duck here). Is is so different from the fatty duck one gets in the US. The skin is crispy and the duck lean and is served in multiple ways:

Dadong Restaruant was our favorite place for duck as much for the atmosphere, as for the food. Duck de Chine was second. Both places have more items than duck, but duck seemed to be the primary dish that people ordered.

Other Beijing restaurants include: