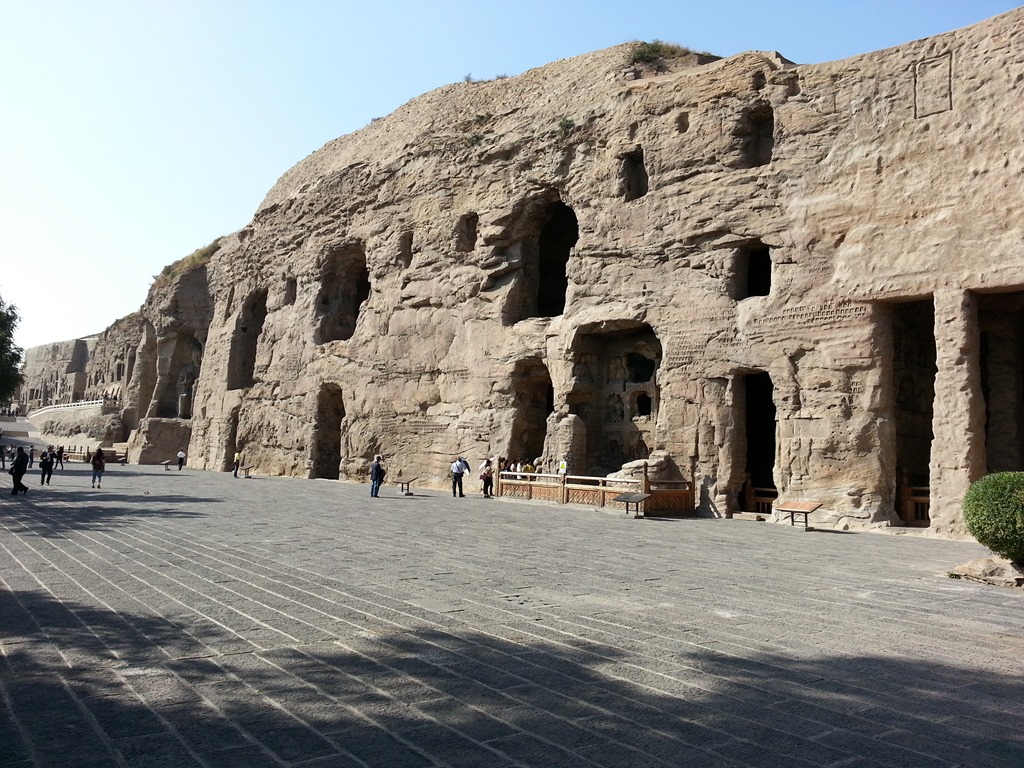 We decided to devote one of our days in Beijing to a very long day trip to one of the former capitals of China, a provincial capital on the border of Inner Mongolia. We booked a guided tour that started with a 7 AM flight to Datong with a return flight at 10 PM and hoped to have a packed-filed day.

Datong is a mining and military center, with  27% of its 3 million population employed in the coal mines. From the skyline of the new section of the city, it looks like it is planning to add another 3 million people. The skyline is studded with row upon row upon row of partially built high-rise residential towers (and some completed ones that looked empty) that our guide somewhat unconvincingly told us would be bought largely by southern Chinese vacationers looking for a cool-weather vacation spot. China has a lot of people, but that’s a lot of people with money to buy a vacation home.

Meanwhile, the old section of town, which appears to date all the way back to the 1960s is trying to position itself as a tourist destination by constructing unconvincing replicas of its distant part–a city wall, complete with dozens of guard towers, gates, buildings and entire blocks.  It was kind of like when Disney recreated the idealized American town to draw in tourists.

We, however, didn’t take an hour and a half flight from Beijing to visit the city. We came for two of the area’s historic sites, one dating back nearly 2,000 years to the Wei Dynasty,when Datong was the capital of China.

The Yungang Grottos, a UNESCO site,  consists of 53 grottos dug out of a mountain in the 5th and 6th centuries. It contains more than 50,000 Buddhist images carved out of the sandstone cliffs or, in some cases, a layer of clay applied over the stone. These statues, some of which are extraordinarily subtle and beautiful, range from a few centimeters to 56 feet tall. They reflect styles and religious images from as far away as Persia and India (influences that came from Datong’s location on the Silk Road), as well as from China itself.

Ming-era (1500-1600 AD) monks played big roles in preserving and beautifying these images in the 16th century. They built a monastery around some of the most endangered of these grottos to protect them from erosion. Artists, meanwhile, painted many of these statues with a range of vibrant colors. While we were able to see some of these painted images,  some of the most vividly painted were were closed for restoration.

This historic site has been dramatically expanded over the last five years, with the addition of a large, extravagant Buddhist temple and stupa–creating a major new religious site where the religious come to worship and the tourists come to take pictures. Somehow, each group is tolerate of the other group. 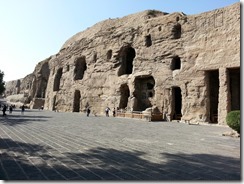 Hanging Temple was the second major historic site that brought us to Datong. This site, which was also originally developed as a temple during the Wei Dynasty, was destroyed by a flood. The Ming Dynasty, however, again came to the rescue by creating a beautiful new temple 50 meters above the valley floor. This temple contains a combination of Buddhist, Taoist and Confucianist images. The primary draw, however, is less the images than the temple itself. Although it appears to be hanging precariously off the face of the cliff, supported by a few slender timber poles, it is, in fact, embedded primarily within natural caves and supported entirely by the rock ledge. But however it is supported, the temple, not to speak of site, is incredible. 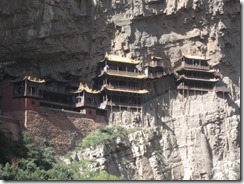 Visit to a Farm Village

Due to the plane schedule (Beijing – Datong only had one plane early morning and one late evening), we had time for a bonus stop to a small farm village. China is the most rapidly urbanizing country in the world, but still has about 800 million farmers, the vast majority of whom farm only very small plots. Although these farmers have an average annual income of only about 3,200 yuan (a little more than $600), the government supplements their income, such as by exempting them from  taxes, guaranteeing payment for part of their crop, paying for their medical insurance and by providing a small retirement income. Still, they live little more than a subsistence lifestyle.

In spite of low income,  they appear to be quite happy and are very, very friendly. On our walk around the village, we saw how everything, from milling wheat to the making of noodles was a communal affair. They were happy to explain their work, show us their crops and take us into their homes, where the bedroom/kitchen and living area are all one room. A fun and very interesting experience. 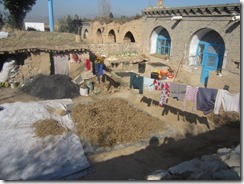 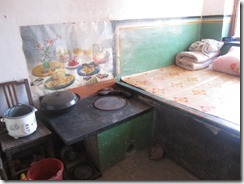 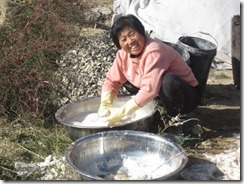 When in Datong, Eat as a Datongian?

With our plane leaving so late at night, dinner was in Datong. Tom, being Tom, is always attracted to the most exotic things on a menu. Datong’s Garden Hotel restaurant offered plenty of interesting opportunities. There was, for example, shark fin soup, bullfrog, tripe, pig intestines and dog meat. All things he has already done.

A number of other items did, however, catch his attention. He had been craving duck web (feet) with mustard sauce since he first saw it. five spice donkey meat looked intriguing, but another dish took precedent–braised ox penis. Where else could he possible find that? So he ordered the duck web appetizer, to be followed by an ox penis entree. While he enjoyed the duck web (which he claims has a consistency and taste similar to that of the grizzle of a chicken gizzard), he was almost inconsolable when he learned that the restaurant’s shipment of ox penis had not arrived. Although he ended up settling for the five spice donkey, he ended up enjoying that even more. Even Joyce tried it!. Although we couldn’t communicate sufficiently to learn how it was prepared, it looked, had a consistency and even a tasted similar to  cured ham. Overall, not a bad concession dinner.

Although the staff spoke little English, Joyce whipped out her Droid with Google translator at the end of the meal and started having a “conversation” with the server. Joyce would type and Droid would write it in Chinese. Then the servers whipped out their English phrase book and wrote notes to Joyce. What started out as a means to fill in time waiting for the time to go to the airport, ended up quite enjoyable.