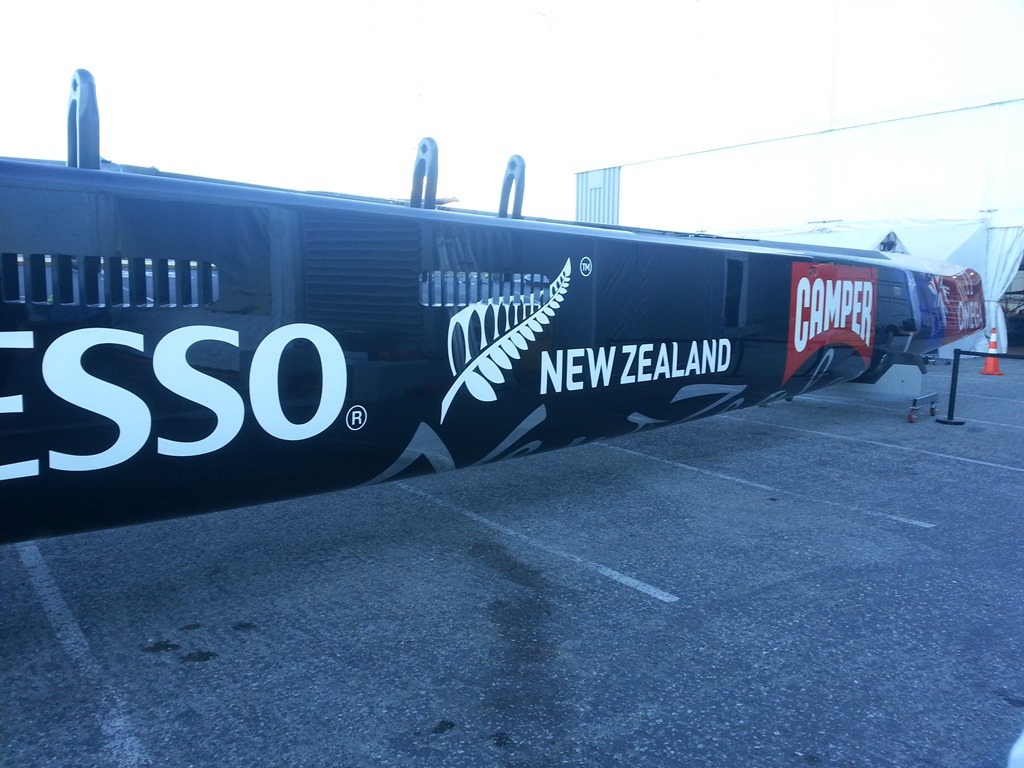 Living in San Francisco, we’re surrounded by everything America’s Cup. Every morning’s newspaper has the schedule of forthcoming activities and the latest controversy, America’s Cup Park is crammed with sailing attractions during the day and concerts in the evenings. The bay, meanwhile, is filled with AC45 and the giant AC72 ships practicing for their competitions.

But, while we see and read about the ships every day, and even have occasional opportunities to listen to syndicate crew and spokesmen discuss the races and the strategies, there are few opportunities to:

We got all this and more, courtesy of the NorCal chapter of the American Institute of Wine & Food and Emirates Team New Zealand, the 2013 Louis Vuitton Cup winner. This cup is the awarded to the winner of the round-robin races among the challengers to the reigning America’s Cup winner (Oracle Team USA). The Kiwis, who beat the Italian and Swiss teams to win the Vuitton Cup, will face the Oracle team in the best-of-17 race series that begins September 7. The winner, not only takes home the cup, but also earns the right to select the location and specify the type of boats that will participate.

The evening began with a guided tour of the facilities and the ship. We began in the tent in which the innovative, 2,800 square foot, 72-foot tall, 1.3-ton, carbon fiber "wings" are stored and maintained. Although we were not allowed to take pictures of these critical components, we were able to feel how thin these incredibly strong components are, learn how they were designed and made and learned how these huge wings provide more speed and control than would traditional mainsails.

Exiting the tent, we found ourselves face-to-face with the 22 meter-long, 14 meter-wide boats, learning how the boats are navigated and handled and the ways in which the "grinders" use the large winches to trim the wing. We saw the size of the trampoline-like netting that connects the two bodies of the catamarans and across which the crew runs during each tack. And we learned about the innovative foils and foil control systems that allow the cats to hydrofoil, slashing water resistance and allowing these boats to hit maximum speeds of more than 44 knots (about 50 miles per hour) up from about 30 knots with the previous generation AC45s. 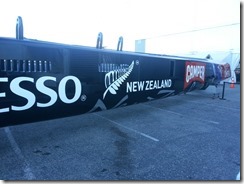 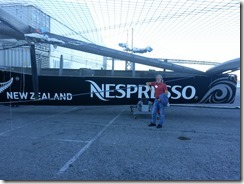 Then to the sail loft where the other sails–the gennakers and jibs–are stored and mended, the crew was trains (with some lifting impossibly heavy weights) and to the locker room, where we saw the equipment members where and the lifesaving gear they use.

Then the fun began. We entered the lovely hospitality room where we were greeted with a choice of eight New Zealand wines–sparkling, Chardonnays and Pinot Gris, Pinot Noirs and Bordeaux blends. The reception gave us plenty of time to visit with other AIWF members, a number of invited Kiwi ex-pats and members of the 95-member New Zealand Emirates team. We had plenty of time to taste a number of wines and were served a number of appetizers, including a wonderful blue cheese atop fig jam on toast points.

Then came the wonderful buffet dinner, with a nice selection of what else–New Zealand food: green-lip mussels, salmon (crudo and poached), beef, a range of vegetables, and the hit of the party–grilled New Zealand lamb chops. After dinner, and plenty more time to talk, a range of tarts, cookies and petite fours came out. 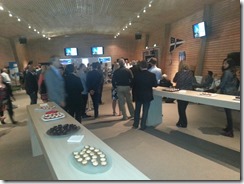 Then, suitably plied with food, wine and hostility, it was time for more learning–presentations, with plenty of time for questions and expansive answers from New Zealand’s U.S. West Coast Consul General and the long-time Business Manager of the Emirates New Zealand syndicate. We learned:

One of the most interesting things, at least to me, was in learning how the America’s Cup has been transformed from a contest decided by sailing skill to one that is likely to be decided overwhelmingly by design and engineering. This design-centric model, which some see as defiling the intent of the entire race will, according the Kiwis, continue as long as so many syndicates are funded by wealthy individuals who would prefer their fate to be determined by technology, rather than by individuals.

The Kiwi expectation for the battle for this year’s Cup? It is impossible, at least for them to know, since they have not had the benefit in seeing the Oracle ship race and therefore, have no idea how fast it is. They are, however, confident of one thing. One of the two boats will prove to be clearly superior. The winner will be determined by technology, and to a lesser extent, how will each team has learned to master that technology, especially, how well it is able to keep the boats up on their foils during jibes.

They project that the America’s Cup series will go pretty much as did the Vuitton Cup series. One team will dominate each race and, except for losses or forfeitures due

mechanical failures, the entire series. Although it may go more than the nine races that are required for the Cup, it won’t go too many more.

In other words, the days of close, one-second wins and 9-8 series victories are over!