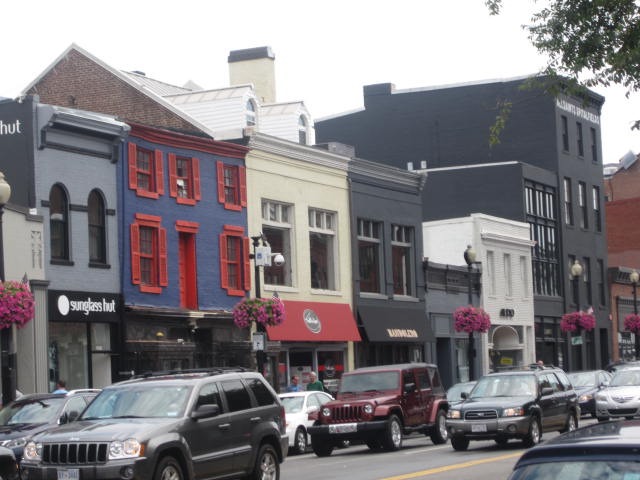 We have done guided tours of Congress, the Supreme Court, the Library of Congress and the Pentagon. this trip, we were looking forward to a few others–Georgetown, the State Department’s Diplomatic reception rooms, and especially the White House. We had, for the first time, submitted an application for a White House tour in plenty of time (about five months in advance of our trip). Unfortunately, we happened to choose the year that all these tours would be cancelled. The bad news: our hopes of visiting the White House were dashed. The good news: we had more time to spend with the Capital’s many other sites and museums. So much for the tour we didn’t take. We did take the following:

Georgetown. We took a guided walking tour of the neighborhood with Washington Walks. The walk was pretty good. While our guide was reasonably knowledgeable, if somewhat slow and overly descriptive in some of his characterizations. The neighborhood itself is beautiful and historic. We learned about some of its history, from its 1751 founding and the potential reasons for its name (although no one seems to know for sure, it was not named after George Washington, who was only 19 at the time). The tour took us through beautiful streets of wooden and brick buildings, and explained the way of telling which brick buildings were built before the Civil War (when bricks were formed by hand from the clay on which the neighborhood is built) and which after (using more regular-shaped manufactured bricks that were manufactured in factories). We learned the meaning of the various historical plaques, such as those in which the owners agreed not to modify exteriors (except for painting them) in return for tax credits, and those that denote which buildings were protected by early fire assurance companies.

The tour covered much of the older, more historic, lower (from M Street to P) section of the neighborhood, from Rock Creek almost to the University, walking both of Georgetown’s main commercial streets (M Street and Wisconsin Avenue) and a number of smaller cobbled streets. 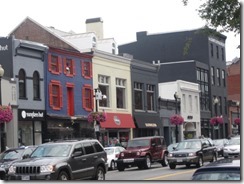 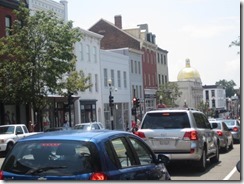 The guide discussed the evolution of the architecture, from the rather unadorned Federal Style, through various stages of Victorian and Georgian, and even some rather ornate Second Empire buildings. Then, of course, there are the historic buildings, (such as the Whitehorse Tavern, which hosted guests including Washington and Marquis de Lafayette) and many homes of Washington’s rich and famous, from John Kennedy to Bob Woodward and Julia Child. 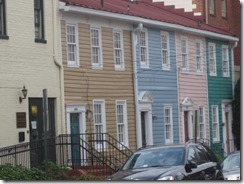 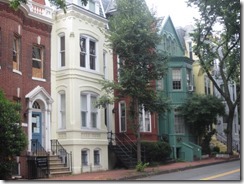 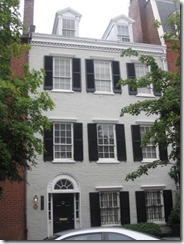 After the formal tour, we walked along the canal and a couple other scenic streets, paused for a quick lobster roll (at Luke’s Lobster) and then crossed back over Rock Creek to begin our own self-guided walking tour through some of our other favorite neighborhoods. These included: 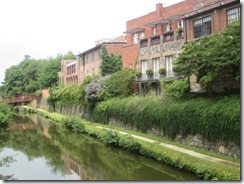 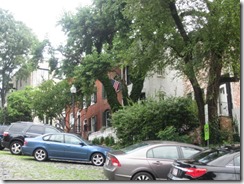 DuPont Circle with its more mainstream stores and loads of think tanks and other nonprofit organizations.

Massachusetts Avenue’s Embassy Row, where many of the early mansions have even converted into embassy’s of countries from England to Japan and Tonga; 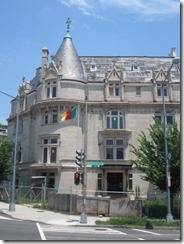 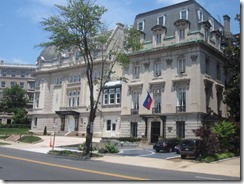 Kalorama, which was built largely in the Victorian period, contains a number of its own embassies plus some of the cities largest and most expensive homes. 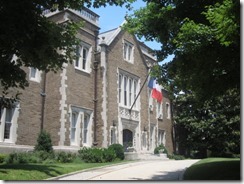 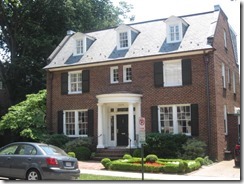 Hayes-Morgan, a more recently gentrified neighborhood whose different sections have very different styles of everything from multi-family dwellings to large single family homes and tiny cottages. 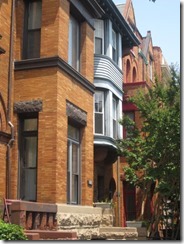 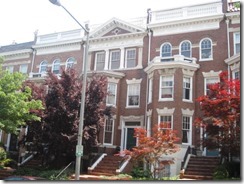 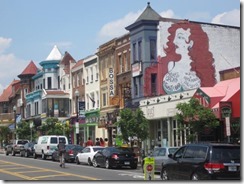 U Street Corridor. One of the city’s best evening hotspots. Although we haven’t found much in the way of restaurants (unless you count the per perpetually packed, and from our experience, mediocre Ben’s Chili Bowl), the area is packed with bars. Many, including Marvin’s, the 9:30 Club and especially Bohemian Caverns, have music–especially Jazz.

Then back to the Lafayette Square and two of the prettiest public buildings in the District:

The White House and the Executive Office Building. 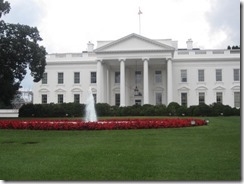 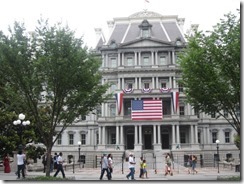 Our guide for this Viator tour was a font of knowledge, not only about the assassination plot, but about the city. He fully explained Booth’s plan to “decapitate” the government by killing not only Lincoln, but also Vice President Johnson and Secretary of State Seward.

The tour, which began across from the White House in Lafayette Square, took us past and, in the case of the Willard Hotel, though some of the buildings that played a role in the conspiracy. These included the house in which Seward was attacked and almost filled, the hotel in which Johnson and his intended assassin (who did not carry out his role) had lived and on to Ford’s Theater (where the assassination took place) and the Peterson house (where Lincoln died). (See our recent DC Museum blog for a discussion of a tour of the Theater and the house.)

The guide discussed the president’s efforts to prevent the and, when it became inevitable, to recruit Robert E. Lee to lead the Union army. He described the history of Booth’s famous acting family and laid out, in somewhat too much depth the details and the timeline of the conspiracy and how it evolved from a plan to kidnap, to one to kill the President. We learned the role that each member of the conspiracy was intended to play and the details of what each did and did not do during the fateful day. We learned of Booth’s elaborate preparation to enter and escape from the president’s booth at the theater (at which Booth was an actor), got a blow- by- blow (or more accurately, a slash-by-slash) description of Lewis Powell’s attempt to kill Seward and understood the reasons that the other co-conspirators gradually distanced themselves from the plot or decided not to carry out their assigned roles.

The guide explained how Booth was likely injured as he jumped to the stage and how the words he uttered suggested that he saw himself as playing the same type of role in protecting the south that Brutus saw himself playing in protecting the Republic of Rome from the tyrant, Julius Caesar.

We learned how each of the conspirators (not to speak Mary Surratt, who may or may not have been involved) were apprehended and executed, and how one—John Surratt—was eventually captured in Alexandria Egypt and acquitted.

Although the guide knew his material cold, he had a burning need to share all his knowledge and evident passion for the subject. As a result, the tour, which was supposed to have been two hours, ended up lasting three hours.

This is one of the government building tours that must be reserved in advance. After an elevator ride, you reach a top-floor lobby that provides entrance into a suite of about eight beautiful rooms that the Vice President and Cabinet officers use to receive and entertain foreign dignitaries. The rooms, which range from intimate drawing rooms to a large room that can accommodate more than 200 people for formal, sit-down dinners, are continually busy, hosting between five and twenty events per week.

The rooms themselves are beautiful. Many are wood-paneled and all have walls lined with American paintings, floors covered with beautiful Persian rugs and are illuminated by elegant English crystal chandeliers. 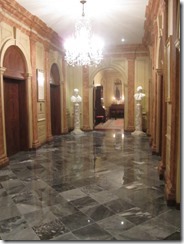 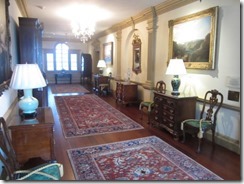 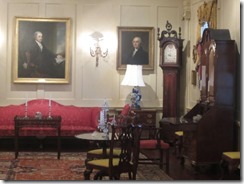 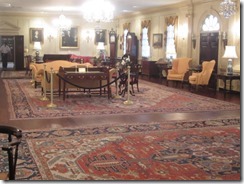 Each of the rooms is filled with beautiful Queen Anne and Chippendale antique furniture and innumerable historic objects including Paul Revere silver serving sets, the custom architect’s table on which Thomas Jefferson drafted the Declaration of Independence and half- finished painting of the signers of the date? treaty of Paris (which ended the American Revolution). Best of all, the cost of constructing these rooms was all funded by private dominations and all items were either donated or lent to the Department of State. 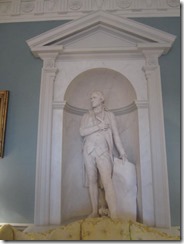 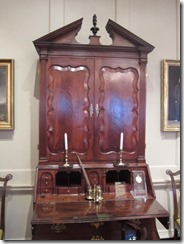 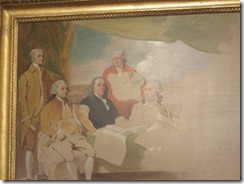