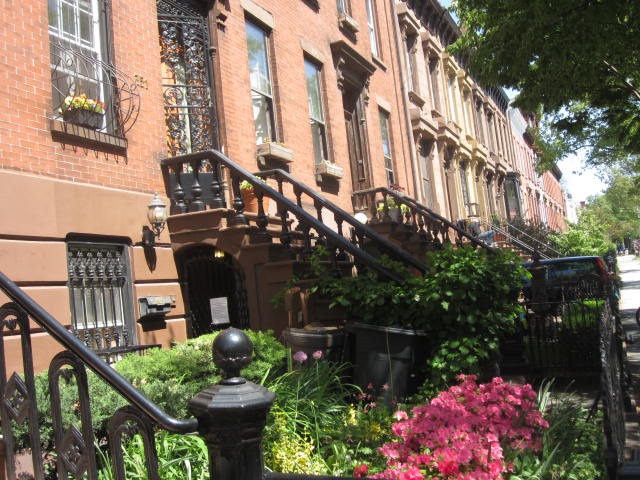 We always rack up many walking miles in New York. Joyce tracks the miles on her pedometer and mandates at least 10,000 steps a day (5 miles), but we often achieve 20,000 steps or  7-10 miles each day. Most of our walks are in the areas we know quite well: the Theater District (where we often stay and spend most evenings), in the Upper East Side and Chelsea (around the museums and galleries we visited), in Harlem (the Apollo Theater), and on the Upper West Side and Greenwich Village (visiting friends and running errands).

This time we went to an area to which we have never been (Brooklyn’s Park Slope) and got to see a very different side of a couple of other areas to which we had been a few times before (the High Line and the area around City Hall).

We primarily went to this little neighborhood tucked in the middle of Brooklyn to visit the Brooklyn Museum–but since we were in the neighborhood, we decided to take a brief tour. We walked by the lovely Botanical Garden, down the main boulevard, past the monumental arch, along the hopping restaurant-driven commercial streets (especially 5th Avenue) and on a number of tranquil residential streets (with neighbors sitting on their stoops and working on their gardens who actually converse with each other!). After walking these streets and tasting our way through the Sunday Farmers’ Market, we had to leave to catch our plane home. On our next visit, we hope to sample some of the more promising looking restaurants—of which there were many. 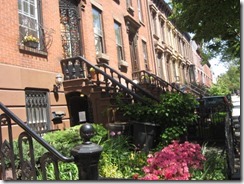 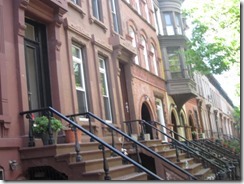 On our many visits to NYC, we never managed to get to the City Hall neighborhood to see Frank Geary’s addition to the New York skyline—the 76-story 8 Spruce Street tower that is the tallest residential tower in the country. We wanted to see the tower, not for its height, nor to understand what is claimed to be its pioneering construction techniques nor to experience its even loftier rents. We just wanted to see its undulating façade, constructed of 10,500 stainless steel panels, each of a different shape and size, that resulted in different footprints for each floor and different layouts for each of its units. This time, we made it and agree with the many architectural critics who consider it to be one of the most beautiful buildings in the city. This beauty is echoed, in a very different way, as we walked around the building and as the sun shifted in the sky. As beautiful as the building was, you just had to turn your head to catch a view of the Brooklyn Bridge. We only wished we could visit someone in the building to catch a glimpse of the view from one of the windows. 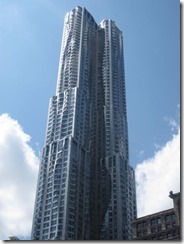 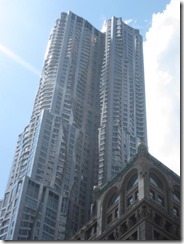 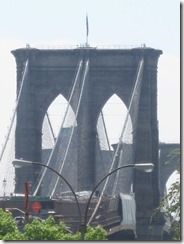 What are some of your favorite walks in New York City?