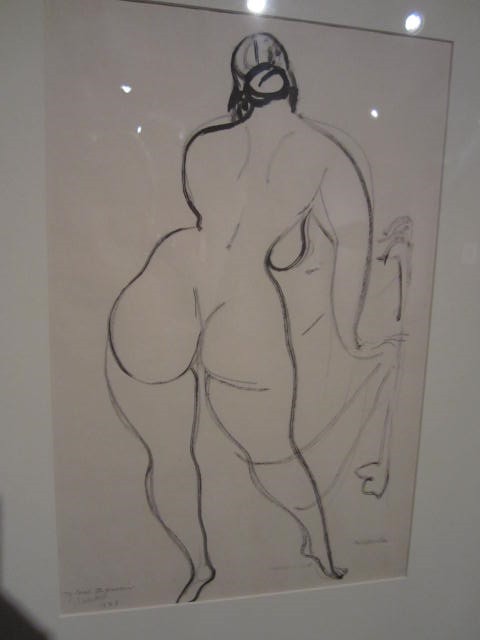 The Brooklyn Museum holds over 1.5 million works of art. It is knowns for its collection of Egyptian and African art.

In 2014, we caught an exhibit on Ai WeiWei. This contemporary artist, favored by the Chinese government until he began protesting government policies (especially after the devastating Sichuan earthquake) works in a wide range of media–sculpture, photography, video, and installations of everyday objects. He provides a unique perspective on common objects such as with Moon Chest (six wooden chests, each with circular holes, arranged in a way that when looked through, suggest phases of the moon), shows wry humor (as with Chateau Lafite, with a wine bottle (wrapped in a pair of sandals) and political protest, as with an installation cataloging the possessions of a fellow dissident of whose belongings the government had thrown onto the street). Each of the roughly 50 works evoked vision or a memory or told a story. A fun, enlightening, and simultaneously disturbing exhibit that is well worth a trip to Brooklyn, and while you are there, catch the Judy Chicago exhibit (especially the room-sized Dining Party installation), the exhibit of art related to the 1960s Civil Rights movement, and a number of fun pieces such as the tree growing through the middle of a piano. And hopefully, you will have time (which we did not) to spend a couple of hours strolling the neighboring Botanical Garden, especially in spring, when the cherry trees, lilacs, and roses are in bloom.

In 2013, we visited several other special exhibits.

This exhibit contained five different categories of drawings (human body, costumes, portraits, landscapes and narratives) of American Artists, all from the museum’s own collection. While the exhibit included drawings from artists such as William Merritt Chase, Marsden Hartley, Edward Hopper and Georgia O’Keefe, it was, in our humble opinion, outclassed by two other exhibits at the Brooklyn. 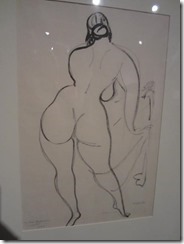 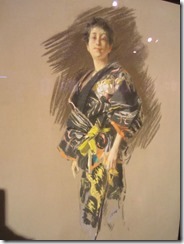 The Ghana-born El Anatsui exhibit focused on three types of innovative, very large-scale compositions made almost entirely of waste products. Massive wall hangings constructed from thousands of bottle caps and liquor bottle foils: floor constructions built from aluminum can tops; and floor displays made of waste paper. It was very impressive, very engaging, and very intimidating in terms of the amount of work that went into each piece. 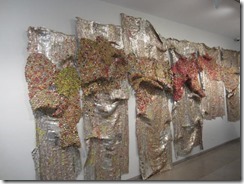 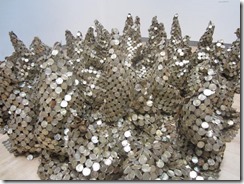 The most impressive of the three special Brooklyn exhibits was a huge collection of John Singer Sargent watercolors that combined works from the museum’s own holdings and from Boston’s Museum of Fine Arts. This encyclopedic collection traced the slice of Sargent’s career during which he took a break from the huge, highly lucrative commissions he received for painting solemn, intricate, highly finished oil portraits of wealthy patrons in favor of quick, casual, impressionistic watercolor depictions of nature and people that he encountered in travels through Southern Europe, Northern Africa and the Levant. Freed of the constraints of his commissioned portraits, Sargent appeared to delight in the freedom to use a bright palette, to experiment with a loose impressionistic style and to explore the play of light on water and stone (including series of Mediterranean harbor scenes, of Venice and the quarries in which Carrera marble was being mined. A totally different feel from the oil paintings with which we are most familiar and continue to love. 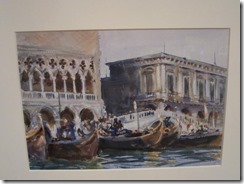 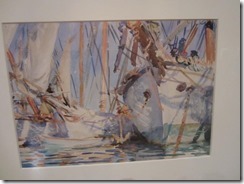