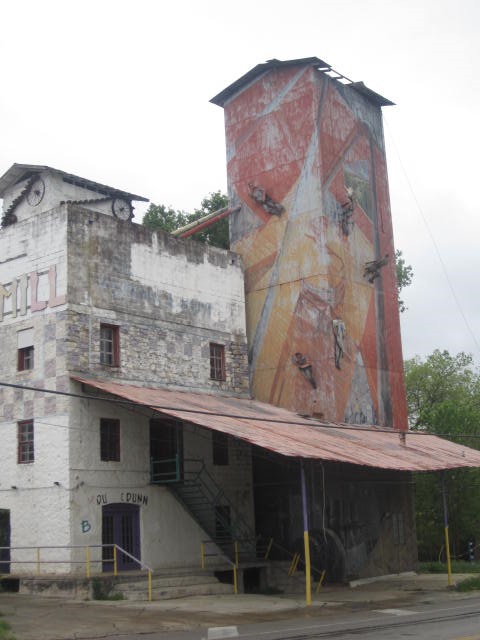 We have always wanted to visit the Texas Hill Country during springtime, when the wildflowers were in bloom. Despite a number of business/leisure trips to Austin (and one previous visit in San Antonio), none of the trips seemed to correspond with wildflower season. So, not only did we lose out on the flowers, but also the center of the state’s increasingly popular wine region and the home to what are reputedly, some of its prettiest towns. This year, we, along with some friends from Boston, decided to that it was time to remedy this gap in our goal of seeing all of the most noteworthy (at least to us) areas of the country. After a day and a half in San Antonio, we packed our saddlebags and moseyed north to Johnson City, west to Fredericksburg (where we spend a night), and then north and east through some of the state’s prime wildflower country (around Llano and Burnet) before a two-day stop in Austin, the self-proclaimed “Live Music Capital of the World”.   Johnson City—Art and History After a modest, but tempting display of flowers along Route 291 from San Antonio to Johnson City, we met with the first of the trip’s few disappointments: The Benini Studio and Sculpture Ranch, which displays primarily the artist’s own multimedia creations in the studio and about 100 sculptures from a broad range of other artists across the 140 acre ranch, was closed for the day. (It was, in fact, posted with a “For Sale” sign!) But while we were thwarted in our efforts to see the sculpture ranch, Johnson City brought one piece of “sculpture” right to us, in the form of a painted, sculpted grain elevator right on Rt 290.

We, however, rapidly recovered from that disappointment when we reached our second stop, the Lyndon B. Johnson National Historic Park. After an introductory movie and brose through the visitor center, we took a self-guided driving tour of the ranch (where Johnson was born, lived, died, and was buried), ending up at the Johnson home and Texas White House. We saw and learned about Air Force One Half (the small commuter jet that Johnson preferred to the larger Air Force One), many of the cars he used and the closet filled with Texas and White House-themed gifts that he enjoyed giving. Then there was the ranch’s old (and new) show barns, the Secret Service House and the power station that was built to upgrade the home’s single-line, hand-crank telephone that he used through his career in the Senate, to a then state-of-the-art multi-line system (with phones in every room) on which he relied to employ his famous in-your-face brand of persuasion. Then there was the old “Cabinet Oak,” which was circled with lawn chairs in which Johnson held Cabinet meetings while he was in Texas.

Although photos were not allowed inside the home or the presidential office, both were to appear as they were when he was in office. It was repainted and retrofitted, with the furniture, fixtures and personal item (including many of the president and first-lady’s clothes) that were in the home during the couple’s White House years. Since this historic park and tour were focused primarily on Johnson’s personal life (unlike the Presidential Library and Museum in Austin, which focuses primarily on his political life), it did not get into his policies or the issues he faced in office. They did, however, present a vivid personal picture of the man (and woman) who did so much to shape the country during one of its most turbulent decades.   Stonewall Wineries The town of Stonewall is Ground Zero of Texas Wine Country. We would be remiss of our duty if we did not sample the wares of at least a few of its producers. Although we tasted almost every varietal, few are really ready for prime time. Our stops, based on recommendations from fellow American Institute of Wine & Food members and from hosts at the wineries we visited, Pedernales, Becker, Grape Creek, Hilmy and Four Point, the latter of which represents wines from three wineries (Lost Oak, Brennan and McPherson) from three different Texas regions (Fort Worth, Comanche and Lubbock, respectively). After all our diligent fieldwork, we discovered that the most promising are wines based on Rhone and Mediterranean varietals—especially Tempranillo. Among those that were most interesting were:

In the midst of all this tasting, we decided we had to eat. When we asked for recommendations, were continually told to take the 20 minute drive to Fredericksburg. But since we still had more Stonewall stops to make, we decided to ignore there warning and eat at a local café. The people were friendly and the service good.   Luckenbach General Store and Dance Hall After completing our winetasting duties, we had one more brief stop before reaching our evening destination of Fredericksburg. Luckenbach isn’t so much a town (actually hamlet) as it is an old happening Texas ghost town. With only a handful of few residents, the town’s fun, touristy/functional General Store, with its decommissioned Post Office, crowded backroom bar, with a window opening to a serving bar open to a small concert venue. The town “restaurant” and large dance hall are next door. The town center is indeed a place to behold. It is an incredibly active (for its size) country music venue that has hosted the likes of Waylon Jennings, Willie Nelson and Lyle Lovett. In fact, it holds a spot in the Guinness Book of World Record for the most guitar players gathered at one time to play (continuously, at least 5 minutes)—a total of 1,868! But if you think downtown Luckenback is just for tourists, tell that to the chickens who are roaming the yards and the bar.

Unfortunately, we managed to visit on one of the few days in which there was not one of the regularly scheduled Picker Circles, dances, shows and events. You can bet, however, that we will plan our next trip around Luckenbach’s and the Belini Sculpture Ranch’s schedules.     Fredericksburg as Hill Country Destination Fredericksburg is a destination town, as evidenced by the big, someone soulless hotels, kitschy tourist shops and tour buses. But get beyond that. It’s an attractive, lively, 150+ year-old German farming town that is still known for its peaches, its lavender and, in Texas circles, its wine. It is loaded with German-style stone houses and has an attractive and lively Main Street, fun bars, good restaurants and a world-class museum. Besides, where else can you find gourmet chocolate shops that have chocolate-covered bacon, pickles and jalapeno peppers. Or, for that matter, a wide selection of (We Don’t Call 911” signs that promote the region’s long-established gun culture.

Walk both sides of the Main Street, take a rest in one of the drinking/drinking venues (country and Western, German or Contemporary), enjoy a good meal (our was at the Cabernet Grill) and then spend a three, four or more hours in the fascinating (at least for history buffs) National Museum of the Pacific War. This museum, which is based in the hotel that was owned by World War II Pacific Fleet Admiral Chester Nimitz, is spread across three primary buildings:

Although we had many recommendations for good Fredericksburg restaurants, we had time to try only one:

The Quest for Wildflowers While the annual display has been substantially muted by five straight years of drought, there was still plenty to see and do. Our first stop, out of Fredericksburg, was Enchanted Rock, a 425-foot tall pink granite monolith that covers 640 acres.

Then on to lunch in Llano—, for a hugely popular and very busy Texas BBQ experience:

We then took a slight detour on the way to Burnet to sample one more winery, Fall Creek Vineyards, on what used to be (before the drought) the shores of Lake Buchanan. While it is one of the largest wineries in Texas, we were not particularly impressed by any of its varietal wines. Not till the end of the tasting did we discover the real sources of the demand for its wines—the $9.99 semi-dry (about 2% residual sugar) Ed’s “Smooth Red” and “Just Right White” and the even sweeter (5-6% RS) Twin Springs Sweet Red, White and Blush wines. (They would not even hint at the grapes, much less the percentages, that went into each of these wines. Not exactly our tastes, but it certainly helps explain the source of Fall Creek’s demand. But while we didn’t exactly fall in love with these wines, the drive did take us past some of the prettiest wildflowers of the entire trip. It was a perfect lead up to stop at Inks Lake State Park, which is, from what we heard, Wildflower Central. Although the drought took its toll here too, the drive, combined with a long walk along the park’s trails provided a day filled with, honeysuckles, firewheels, baby’s breath, daisies, broomrape and indigo—not to speak of bluebonnets (the Texas state flower)., mixed in with assorted cacti and succulents.

Overall, our trip through Texas Hill Country was two days that were very well spend. It was also a lovely way of relaxing before two long days, not to speak of very long, music-filled nights in Austin.