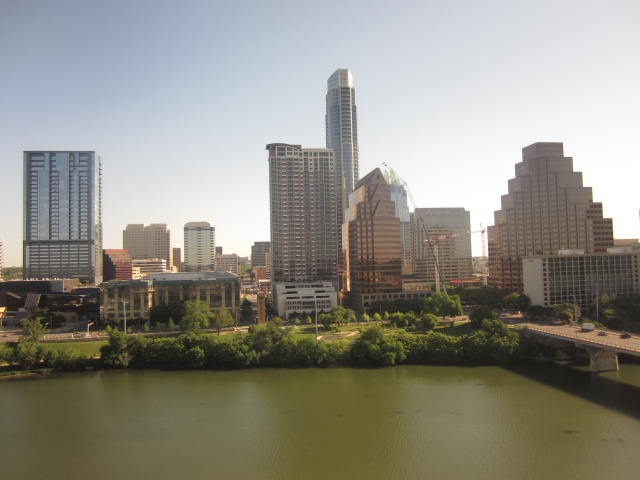 We spend the last two days of our Texas trip, which we conveniently planned for the weekend, in Austin.

Although I have been in Austin a number of times, most of my time was spend in the suburbs, in meetings and when I had a little extra time in the evening, around the bars and music clubs of Congress Ave and 6th Street. This trip provided a broader view of the city.

Our first stop, given our wildflower journey, was to see more wildflowers:

Lady Bird Johnson Wildflower Center. Although we certainly saw a broad range of wildflowers, and some lovely ones at that, there weren’t anywhere near as many as we had expected. In fact, the center appears to be at least as focused on, and devotes far more space to its arboretum and its “Glory of Trees” focus, than it does to wildflowers. Nor was our quest to learn more about the flowers helped by the fact that visitor’s gallery was closed for the day.

Austin Downtown To Do

Daytime walks through the city’s Congress Ave Market and Warehouse districts bear few traces of the city’s trademark Weirdness. Some lovely buildings (especially the State Capitol, the Driskill Hotel and stately homes and offices along a couple streets just south east of the Capitol). There is, of course, also a plaque noting the location that the first Austin City Limits music-based TV series was filmed. But for the most part, Austin looks like a normal business city.

Things begin to more interesting when you see all the bars and music venues around 6th Street (most of which are either closed or nearly empty during the day), and especially as you venture further west into the edgier Red River district, with its tattoo parlors and especially Stubb’s popular BBQ restaurant and concert venue. Although a few of these venues are active during the days on weekends, they, as discussed below, typically don’t come alive until about 9:00 PM.

Two of the most interesting daytime activities are a bit further north, on the University of Texas campus. The most interesting of these (at least when Texas is not playing football) is the LBJ Presidential Library and Museum, which is both educational and engaging.

LBJ Presidential Library and Museum begins with a timeline of LBJ’s life and progresses through written descriptions, videos and audios of many of the President’s most important initiatives, especially his efforts to reduce poverty (including the Great Society and Medicare and Medicaid programs), improve the state of blacks (as through the Voter Registration and especially Civil Rights Acts), improve education (as with Head Start and funding of Public Broadcasting and the National Endowment for the Arts), and some of his—and Lady Bird’s environmental initiatives. And of course, in this age of ballooning budget deficits and stubbornly high unemployment, it spoke of his balanced budgets and 3.3 percent unemployment rates.

Although many of his foreign affairs efforts, such as those in dealing with the Cold War, Latin America and the Middle East’s Six-Day War were discussed briefly, the foreign affairs section of the exhibit, as would be expected, focused primarily on Vietnam. It doesn’t sugarcoat the controversial war, discussing the heavy toll on American lives (with 58,000 dead, 153,000 wounded and 2,500 missing) and society, and on the Vietnamese. It spoke of Johnson’s personal traumas over U.S. involvement in the war and attributed his decision to not seek reelection in 1968 largely as an effort to accelerate stalled peace talks.

The museum also provided obligatory (for Presidential museums) recreations of both the Oval Office and the First Lady’s Office and some of their mementos. And then came a touch that is very uncharacteristic of Presidential Museums—an animatronic recreation of LBJ telling some of his classic, corny jokes. Can you imagine something like that at the Nixon museum?

During our visit, the museum also had a special exhibit of some of the most interesting photojournalist photos taken of presidents over the last decade—an exhibit that certainly brought back memories.

The Blanton is a treat, at least with current exhibit, in which art that is being lent and donated by University of Texas alumni and trained artists has taken over almost the entire museum. The show begins when you walk into the lobby, with its striking acrylic walls designed by Terresita Fernandez. The walls, which are called “Stacked Waters), layer varying shades of blue, from deep blue through aqua, to almost white, to create an illusion of water of varying depths. The temporary exhibit, meanwhile, contains hundreds of pieces that span from Renaissance to contemporary art.

It is not that Austin is no longer weird. It’s just that the locus of this weirdness has moved south of downtown and the river to the hot South Congress (SoCo) neighborhood. The roughly 10-block stretch of Congress Avenue, which is crowded during the days and packed at nights, is filled with causal restaurants, music clubs (especially the Continental), food truck parks, fun shops and of course, the occasional busker.

The most fun shop of all is Lucy in Disguise with Diamonds. The 8,000 square foot store, which is filled with outrageous vintage clothes, costumes and disguises, offers everything for purchase or rental.

The Live Music Capital of the World

Although we were certainly interested in Austin’s neighborhoods, museums and shops, we were primarily interested in its music. And there is no shortage of opportunity to hear it. An evening walk along Sixth Street, South Congress and Red River Street will expose you to virtually every type of music you could hope to hear. We spend most of our time at three clubs:

Stubb’s and Continental Club, meanwhile, were louder and drew younger crowds with more contemporary music. Saxon Pub, which is well outside the downtown area, was playing country and western. These, however, are only a few of the city’s hundreds of music venues. Odds are, that you will be able to find at least a few that play exactly the type of music you are interested in, and cater to your type of crowd.

Since restaurants are important components of all of our trips, we looked long and hard to find some of the most interesting. We generally succeeded. Our absolute favorite was:

We also generally enjoyed, three less innovative places at which we ate in the city: