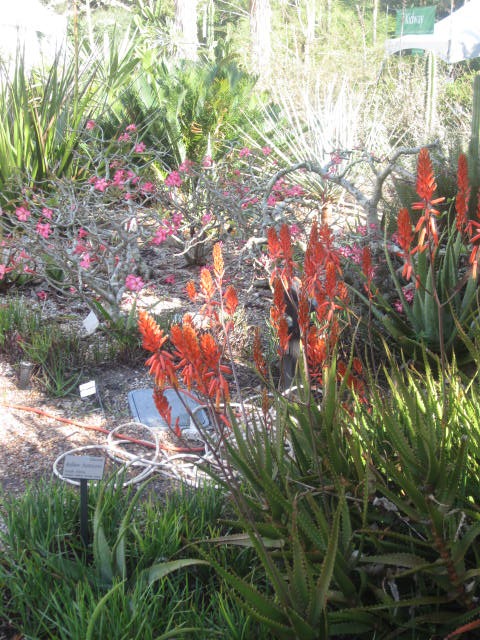 Every time we leave Miami, we think we have seen and done pretty much all of most of the interesting things the city and surrounding area (from Palm Beach through the Keys) has to offer. But in planning for each new trip, we discover we were wrong. In addition to the many do-agains, we continually discover new opportunities.

Since this year’s trip was focused primarily on Art Basel and the huge number of Miami Art Week events (our see Art Basel and Miami Art Week 2012 blog), most of our Miami trip was focused on art. We did, however, still have a chance to visit a number of new (at least for us) restaurants (see our Miami Restaurants blog), explore some of the city’s architecture (see our Celebrating Miami Architecture blog) and squeeze in a few other interesting and fun activities.

Most of our time, as usual, was spent in South Beach. This included about seven hours at the Miami Beach Convention Center (the primary Art Basel site) and wandering the suites of a few of the many hotels that housed off-site galleries, exhibitions, and artists.

While we certainly returned to South Beach for restaurants and walks of Ocean Drive, Collins and Washington Avenues and the Lincoln Road Mall (see below), most of the rest of our Miami time was focused on other Art Basel satellite venues, such as downtown, the Design District and especially, Wynwood.

We first visited this budding neighborhood three years ago, when it was little more than a dream. There were the Wynwood Walls, a couple restaurants and boutiques, a few pioneering galleries and freshly painted murals on a handful of neighboring buildings. Beyond this core were boarded up warehouses, discount shoe stores and vicious-looking guard dogs barking ferociously behind ubiquitous chain-link fences.

What a difference a few of years make:

This combination of factors has already turned Wynwood into one of the hottest, hippest art venues (not to speak of one of the biggest urban turnaround stories) in the country. The second week in December, however, was different. As discussed in our Art Basel and Miami Art Week 2012 blog, this week brought an artistic perfect storm to the rapidly gentrifying neighborhood. For example:

This created a build-in market for Second Saturday. Thousands of art-obsessed collectors form around the world, exiting Art Basel tents, flooded into one of the country’s newest and hottest art venues. They flooded the galleries, scooped up bargain (especially compared to Art Basel prices) art from up-and-coming artists (some of the gallery owners with whom we spoke had never had a week like this), overwhelmed the restaurants, bars and food trucks, and generally reveled in the crowds, the music and the crowds. And to make things even more interesting, many of the walls that had not yet been painted, were being painted during the celebration. You could speak with the artists and even commission them to create a new masterpiece specifically for you!

We are also big fans of a lot of Miami’s architecture. While we particularly love the Art Deco-rich South Beach, we also enjoy some of North Beach’s Art Modern hotels and a number of downtown’s extravagantly luxurious (at least from the outside) office and condo towers. As discussed in our Celebrating Miami Architecture blog, we took informal tours of some of these and also took more forma tours of two of the city’s most recent architectural stars—Frank Geary’s New World Center and, believe it or not, Herzog & Miller’s 1111 Lincoln Road Parking Garage.

Beyond Art and Architecture

Art Basel-associated activities, along with our architectural explorations and restaurant experiences, left little time for anything else. But, since we always try to see and do as many interesting things as possible when we visit a city, we did find a few new attractions to explore. Not that they were new to the city, but they were new to us. One was an exploration of nature (with some art tossed in). The other an exploration of history.

Fairchild Tropical Botanic Garden. This Miami botanical garden has an extraordinary collection of all types of plants, a fun butterfly garden, and on the day we went (as part of Art Basel) a large art exhibit (Zimbabwean Shona arts) and a few large-scale contemporary sculptures that were integrated into the gardens. And, since Art Basel was such a big weekend, a Caribbean steel drum band, booths selling food and specialty garden supplies–and free mimosas as we walked through the Shona sculpture exhibit. While we were there, we also went to an interesting lecture on butterfly farming (what is involved in the raising and selling of tropical butterflies and the implications for local economies).

Although there was far too much to see and to do squeeze into the few hours we were able to devote to the Fairchild, we loved some of the gardens (especially the tropical and succulent gardens), the butterfly garden and many of the Shona sculptures. And of course, there was a Chihuly glass sculpture.

While we were somewhat frustrated by our need to see and run, we really enjoyed our brief visit. We shall return.

Gold Coast Railroad Museum. The railroad played a huge role in the development of Florida, carrying tourists, and increasingly residents down the eastern side of the peninsula, eventually all the way to Key West.

While we expected this small museum to highlight this role, it’s focus was more ambitious–to highlight the history, and old glory, of passenger railroads throughout the U.S. by collecting, displaying and by providing tours of and in some cases, rides on, some of the country’s most iconic rail cars. These included a steam locomotive, the original California Zepher (with its original view dome), a number of cars from the Flagler Railroad that traversed the Keys (until the Bridges and tracks were destroyed by a hurricane) and commuter cars (virtually identical to those used today).

The highlight of the collection is the train car built for and used by Franklin Roosevelt for whistle stop tours (and subsequently in his funeral tour), and then, by three other presidents (Truman, Eisenhower and Reagan). The car, which is embossed with the presidential seal and has original FDR furniture, place settings and memorabilia, was built with inch-thick armored steel plates, three-inch thick bulletproof windows and escape hatches on the roof and side of the car.

Other train cars showed what it was like to travel on trains, for up to a week per trip. You can see all classes of sleeping cars, dining cars and lounge cars, as well as staff quarters and kitchens. Some cars were dedicated to technology and historical displays. They contained and explained the role of all types of railroad paraphernalia, examined segregated train travel and the roles and lives of black porters.

For those who prefer their railroad history in a smaller, more interactive form, the museum also has a number of nostalgic model train sets. For children, it has a large train- themed playroom and was planning for a forthcoming temporary visit by Thomas the Tank Engine.

Although the collection is certainly interesting, and the staff dedicated, friendly and helpful, the small museum’s aspirations somewhat exceed its limited budget. Although we do recommend the museum, few of the cars have not been restored and some (due to a combination of their age and the Florida climate) smell. Still, the museum, and especially the tour, is interesting and educational. A worthwhile way to spend a couple hours.

Although we took a number of pictures of the most interesting cars, exhibits and model train setups, technology got the better of me. Unfortunately, someplace between my camera and my computer, the pictures were lost. If they somehow reappear from the ether, I will post them.