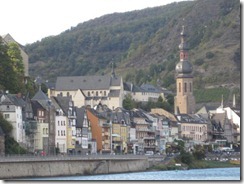 We do not normally do cruises. We generally do them only when necessary to see something we really want to see, such as the Galapagos, the Three Rivers Gorge (before the dam) and the temples and tombs of the Nile Valley. We similarly wanted to see the Mosel and Rhine River Valleys.

While we saw good potions of the beautiful upper Mosel Valley on our own, before our primary cruise began in the beautiful town of Cochem (in the lower section of the valley), we boarded a large cruise ship (110 meters, which was by no means the largest of those plying these rivers) to do the Rhine. The cruise, including the ship’s amenities, the staff, the side tours and in some cases the food, with Cruise Europe was generally quite good.

Joyce and I, as two of the four English speaking guests on an overwhelmingly French cruise, were at something of a disadvantage. Cruise Europe, however, explained very fully in advance that this would be the case and told us that given the few English speakers, that much of the narration and most of end tours would not have English translations. Even so, the staff, and especially Tiena, who is in charge of hospitality on our ship, did a great job of providing special help, especially in providing maps, explaining the highlights of each city and telling us which museums and sights provided English translations. This allowed us to take relatively full advantage of each stop.

Leaving Cochem, we passed through several miles of beautiful, mountainous river banks planted with as many Riesling vines as could possibly be maintained on such steep terrain. This was more of what we saw on the cruise to and from Beilstein and the train to and from Trier (see our Cruising the Mosel River and Cochem blogs), but more so. The banks seemed even steeper, the cliffs even rockier, but the grape growers persevered, filling virtually every surface area with grapes, digging caves into cliff faces and installing racks and lifts to make what seems like an impossible job, merely inconceivable.

Our first stop was in the small town of Alken, where we hiked up to Castle Thurant. Unlike with Cochem Castle, you stay outside, where the most interesting things are the ruins, the dungeon and the torture chamber. Nor does the town offer much, other than the main street, with its restaurants and bars. Overall, we most enjoyed the hike, through the vineyards, and the great views.

After a short afternoon cruise, we arrived in Koblenz, the largest city in the area, at the intersection of the Rhine and Mosel Rivers. Although we didn’t arrive until after dinner, we did have a chance to get at least a feel for the city, generally following the shore to the funicular to the large, 1,000-year old citadel (which was closed by the time we arrived), around to the cathedral, and then into Old Town. While 85% of the city was destroyed by allied bombs, some of the historic churches (like Jesuit’s Church and the Roman Basilica), buildings (Old Town Hall) and monuments (Four Towers entrance into the city) were reconstructed. Although our short walk, especially in the dark, did not do justice to what appears to be a pretty down, we did like the feel of the Old Town area in general, and the Plan Place central square in particular.

While we loved the scenery along the Mosel, by the time we began to move into the Rhine Valley, it became clear that the Mosel was effectively a warm-up for the even more impressive Rhine valley. We began the next morning, opening our drapes to one of the most impressive castles we had ever seen: High on hill, huge and imposing, draped in fog—a great way to begin a day.

The Rhine, especially the segment between Boppard and Rudesheim, is certainly beautiful: higher hills along the river banks, and more castles than you can shake a stick at. Virtually every town has a castle lording over it. And did we mention vineyards? Although this stretch of the Rhine is too steep to allow the type of wall-to-wall planting of vines we saw on the Mosel, every inch that has been deemed suitable, and probably many that have not, have been planted. And they are beautiful, if somewhat intimidating, especially when you think of continual care that is demanded by vines and the need to do all the work by hand. Overall, the cruise, particularly the portion between Cochem and Rudesheim, is beautiful. Beyond Rudesheim, the banks relatively flat and views less dramatic. Pretty, but not particularly exciting, except for the occasional surprise, like the incredible gate of the city of Worms, which is now, somewhat incongruously spans a modern bridge. And then, of course, there are the huge power plants, the chemical plants and other industrial plants that line the river around the industrial cities such as Worms, Manheim and Luwigshaven. But enough of the negatives. There was plenty of beauty and fun things to do along the lovely stretch of the river between Koblenz and Rudesheim.

Most of the four stops, past Koblenz, were quite worthwhile. But, as discussed in our Alsace blog, Strasbourg, which the terminus of our cruise, was absolutely the highlight. Not only is it a beautiful city, but it is the start of the Alsace Wine Road and near ground zero of French foie gras country.

Boppard. A small town with a big wine festival. The good news is that we were there one of the four days of the festival. The bad news is that we had to leave before the beginning of the day’s festivities. Other than watching some of the set-up and seeing some lovely buildings, there wasn’t much else to see or do. A foundation of an ancient church, remnants of the town walls, a few atmospheric streets and half-timber houses. And dreams of the wine festival that we would have to miss.

Rudesheim. This all-too-cute tourist town does have its charms among all the tourist shops. The Drosselgasse is a drinking street, with both sides lined with bars. For those looking for culture and education, there are the mechanical musical instrument, wine and torture museums. But, after a brief tour of the town, and with all the museums closed, we spent our time at another bar, on a somewhat more quite street. This bar, Zum Grunen Kranz, had a large outdoor patio and a 14-piece band (all brass except for drums and a couple clarinets) playing German music. Not only was it fun, but with WiFi access, it was also a productive stop.

But while the town was fun in the afternoon, it, and especially the Drosselgasse, was really hopping at night. The restaurants are filled and the bars amp up the music. Many of the patrons contributed to the fun and be action, singing (with or without music), dancing and just plain having fun.

Maintz. This was the prettiest and most varied city of the trip, with a nice mix of historical and modern buildings, lovely churches and cathedral and a lot of great public art.

The highlight, however, is the Gutenberg Museum. The museum traces the history of printing from ancient times, through the Chinese 10th-century invention of movable type (with clay characters), to Gutenberg’s 15th-century invention using lead letters. It explained the development of his business, including the raising of capital and the lawsuit pitting him against his former partner, and the ways in which printing evolved over the intervening 600 years.

The museum also displayed three of the remaining 46 copies of Gutenberg’s original bible, explaining how the initial versions used hand-drawn colors and graphics and covers that were produced only on purchase. Our guide then demonstrated the initial printing process, from the production of type characters to the making of galleys and the amount of hand pressure required to produce print. A very interesting stop, made all the more rewarding by a chance to see the original bibles.

Although the museum is very interesting, Maintz offers much more than bibles. The Roman town, which experienced its most dramatic growth in the 13th through 15th centuries as a university city, is effectively build around a large cathedral, built in different styles from the 11th through the 13th centuries. There is another beautifully ornate Baroque church and one with stained glass windows designed by Marc Chagall. The city also has a number of interesting buildings, ranging from medieval half-timber homes through ultra-modem commercial and government buildings. Two of the most interesting features, however, are the large number of attractive, spacious public squares and many works of public art, including two particularly interesting pieces, one in front of the City Hall, the other in the middle of Schillerplatz.

Strasbourg. In the spirit of saving the best for last, Strasbourg was the terminus of the cruise. As is discussed in our blog on Alsace, not only is Strasbourg a beautiful city in its own right, it is also at the center of foie gras country and at the beginning of the Alsace Wine Road. While any of these attributes would make it suitable for a visit, the combination (not to speak of its being the end of our Rhine River cruise) made us ask–why did we wait so long to visit this wonderful city?

While Strasbourg is discussed specifically in our next blog, Exploring Alsace Towns and Wines, we want to provide a small pictorial preview.

Overall, pretty similar to those from Mosel (see our blog on Mosel Food and Wine). Same varietals, similar climates and growing conditions, same classifications. The primary differences: Rhine wines tend to be a bit more fruity and have somewhat less acid. The big difference, however, is the bottle: Mosel bottles are green; Rhine bottles are brown! Our experience, however, was a bit of a mixed bag. While some of the wines were indeed fruity, some had a bit too much mineral, distracting from the tastes. But, as discussed in our blog on Alsace, this did not stop us from experimenting, with many Rhine, and later, Alsace wines.