The wine road, south from Strasbourg, is filled with lovely towns, squeezed between vineyards. Among the prettiest are Obernai, Mittelbergheim, Andlau, Itterswiller, Rorchwihr, Ribeauville, Hunawirh, Riquewihr and Kayserville. 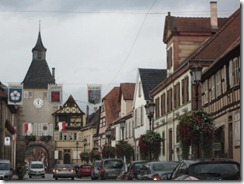 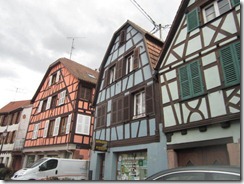 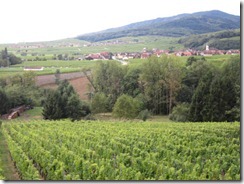 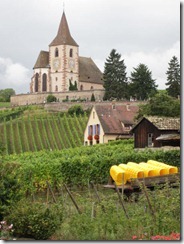 While we drove straight through, or only stopped to take brief walks though most of them, some of our longer stops included:

Itterswiller, where we stopped for lunch at the Hotel Arnold Winstube. We had escargot, seared goose foie gras (of course) and Cornish hen in a delicious Alsatian sweet Riesling cream sauce. We had two delicious wines with the meal: a Klipfel Pinot Gris and a Frey Gewürztraminer. All very good. 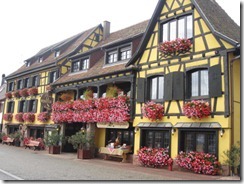 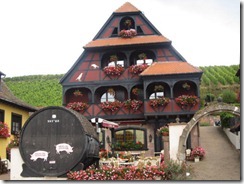 Ribeauville, where we walked the downtown, tasted the wares of a few local wineries (nothing memorable), tasted some local sausages and bought a wonderfully stinky Munster cheese, which is produced close by in the farms of the Munster Valley. 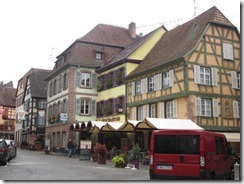 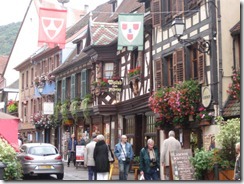 Colmar, after a brief drive thought the city’s old town, and around a traffic circle that contained a replica of native son Frederic Bartholdi’s gift to the United States (the Statue of Liberty, we stopped at the Maison des Vins d’Alsace. Although we planned to do a tasting of Alsatian wines, we discovered that, contrary to what we had read, tastings were only available to larger groups. They did, however, provide us with a wealth of information on local touring and wine tasting options. It was too bad that Colmar was our last stop before driving to the city of Mulhouse, where we were to spend the night. 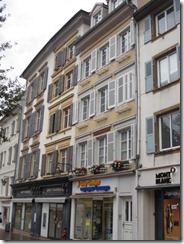 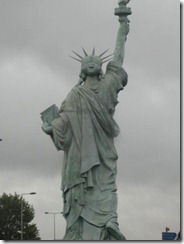 Although we really enjoyed the day trip and many of the downs at which we had stopped, we again ran out of time. We would have loved to have stayed longer in some of the towns in which we did stop, and had time to visit a number of those in which we could not. We would, for example, have liked to stop in Haut-Koenigsbourg (with its restored medieval castle), Kientzheim (for its Museum of Alsace Wines), Riquewihr (with its Ebermunster Abbey) and especially Kayserville (for a visit to the Albert Schweitzer birthplace and cultural center. Unfortunately, we just an out of time. We hopped onto the expressway for the 40-minute drive to Mulhouse, where we spent the night.

This taught us a valuable lesson–too late for us, but hopefully for others. If you really want to appreciate the Alsace Wine Road, take at least two days. If you want to do it in one, take the A35 expressway from Strasbourg, straight down to the town of Chatenois (near the Selestat highway exit) and take a leisurely drive, allowing time for exploration, through the region down to Colmar.

Better yet, if you approach the region from the south (which we did not), begin your visit with a stop at Colmar’s Maison des Vins d’Alsace, drive north to Chatenois, and then take A35 to Strasbourg.

An Evening in Mulhouse

Mulhouse is a relatively large city with a pleasant Old Town that makes for a pretty stroll. Our Alsatian dinner was at Zum Sauwadala. We (read “I”) needed one final dose of foie gras on toast. We followed this with two entrees, a huge, and very good braised rabbit with the same type of Alsacean sweet Reisling cream sauce that was served for lunch, with my Cornish hen. (Although, or more likely because, the sauce is so rich and creamy, I really enjoyed it.) The dish came with a large serving of spaetzle. Joyce had less luck with her pan-fried Zander fillet with a Pinot Noir sauce. The dish, which was served with sauerkraut, boiled potatoes and nicely crisped scalloped potatoes, was overcooked. We did, however, finish off our Alsace experience with another nice wine–a 2010 P. Buecher Pinot Gris Reserve Grand Cru. 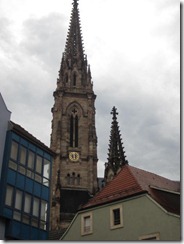 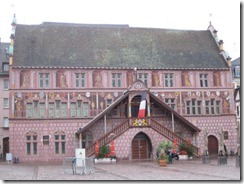 Our summary impressions of the region’s foods and wines: When you are in Alsace, eat as the Alsatians do: multiple days’ worth of calories and fat at every meal. Virtually every restaurant has foie gras, and many it offer it two ways: as a chilled terrine and as sautéed lobes. Menus are typically meat-intensive, especially with pork and veal. Fish is relatively sparse and, from our limited experience, not among the chefs’ best dishes. Sauces meanwhile, are often made with wine and frequently contain cream. They are, however, very good. Just be prepared to diet for the next week.

As for wine, although everybody has their own unique tastes, we generally had our best luck with higher-end (especially Reserve or Grand Cru) Gewürztraminer and Pinot Gris. We generally found the Rieslings too dry, Slyvaners and Pinot Blancs a bit tart and acidic, and the Pinot Noirs too light-bodied and tart for our tastes.