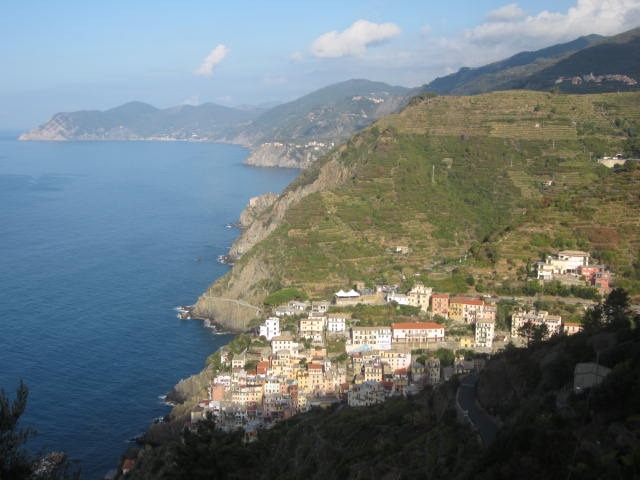 We had never been to Cinque Terra and felt that it would make a nice, easy complement to our Tuscan trip. While the drive that Google Maps estimated at two and a quarter hours stretched to about three, it was well worth it.

The views began shortly after leaving the decidedly non-scenic coastal city of La Spezia, and culminated as we approached Riomaggiori, the southern-most town along the Cinque Terra coast. 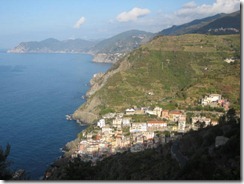 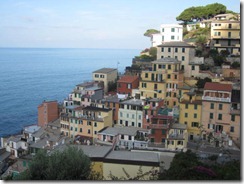 After checking into our hotel, we take a train to the northern-most town, Monterosso. Our plan was to walk as many of the trails as we could to the three towns in between, and take the train among the rest.

Unfortunately, most of the trails had been closed after a recent, fatal landslide, and we were able to take only one trail–a roughly 7 kilometer trail from the sea-level town of Vernazza to the cliff-top town of Corniglia. The trail, which was virtually straight up for more than half the distance, was strenuous, but afforded incredible views, down to both of the towns, the beautiful rocky coastline and up the terraced cliffs to mountaintop towns that we could see from a distance.

The lovely trail reminded us both of the first leg of Western Kauai’s Kalalua Trail, which starts at sea level and rises quickly to offer astounding views of the rugged shoreline. The big difference–the Cinque Terra trail adds lovely, pastel-covered historic towns to the views. In this way, it is sort of a mix between the Kalalua Trail and the trails above the much more urban sea cliff villages of central Italy’s Amalfi Coast. The Cinque Terra trails, however, have something that few other trails do not–acres and acres of grape vines planted on very steep, very scenic terraces running up the hillsides. 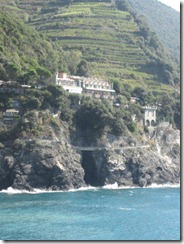 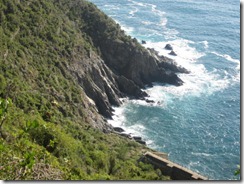 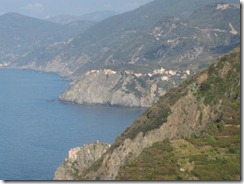 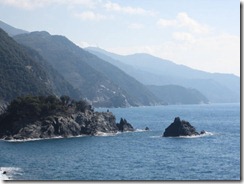 But while the landslide scotched our plans to hike most of the distance, the region’s train service still allowed us to get at least a small sample of all five villages in a single day.

Each of the five towns has its own personality and charms.

Monterosso al Mare is, first and foremost, a beach town. Its beaches, like those of the Riviera, however, consist primarily of stones. Not exactly what we think of as a beach!

The New Town area and its sea-front Promenade have been built primarily around the beach and most of the shops and restaurants appear to cater largely to beach goers. Although we did enjoy walking the Promenade, we found the more historic Old Town area to be much more atmospheric and its restaurants more "authentic." We were, as discussed below, quite happy with our restaurant choice, La Cambusa. 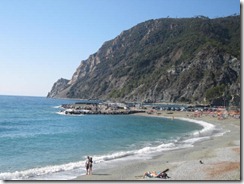 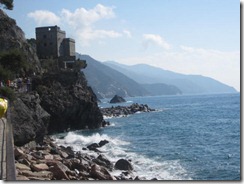 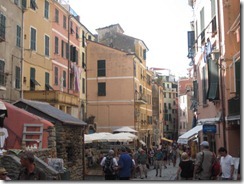 Vernazza, the next town down the coast, is more to our tastes. It is relatively small and manageable and has some interesting historic sites, such as its church and its castle. A concrete and stone spit that winds around the tiny harbor provides a nice spot to catch a view, or just catch some rays. Just as important, at least from our perspective, it has some nice bars with views down to the town and the coast. 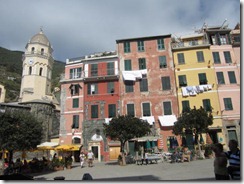 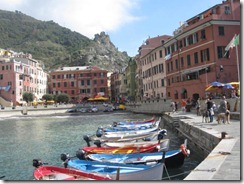 The best views of the town, however, come as you take the steps up though the town, on the first stretch of the trail to Corniglia. While there are many places for such views, the best, as “luck” would have it, is from bar at the top of these steps. After all, what better way to enjoy a view than with a drink? 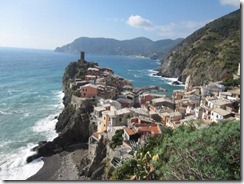 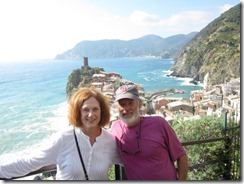 Corniglia is even prettier than Vernazza. The town, which sits high above the water on a sheer rocky spit, makes for an incredibly dramatic sight. This is especially the case when viewed from above, on the trail from Vernazza. The town is also very pretty and atmospheric from street level. With its church and its lovely murals, to its town squares, to its steep, pretty side streets. The only real drawback is that given the town’s dramatic location, there are few spots within town that offers scenic views of the area. 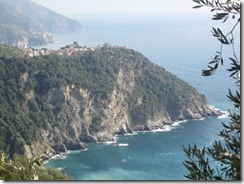 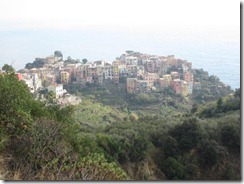 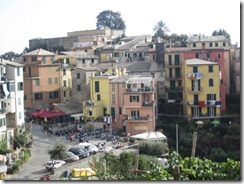 Manarolla is yet another beautiful town, with pastel homes climbing up a black rock mountain, lovely views from terraces that stretch well above the main plaza and commercial street. And, as is the case with many of Cinque Terra’s other towns, it has vineyards squeezed onto level after level of pretty terraces that were excavated from the dramatic mountains. 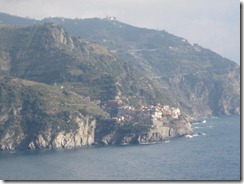 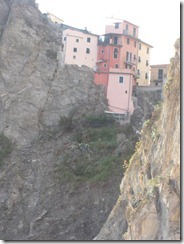 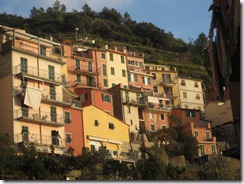 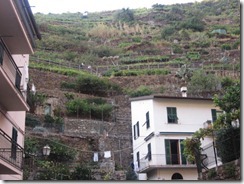 Riomaggiore is the gateway to the Cinque Terra region and also its largest and most commercial town. It, like its sisterer towns, is built on the side of a mountain with its commercial street starting high up the hill from where you enter the region (from the decidedly non-scenic city of La Spezia). The street, which curves steeply down the mountain to the shoreline, has all the basic services of a gateway city, plus some nice restaurants–especially Dau Cilla (see below). Running off the main street are a series of narrow winding streets and stairways leading to homes. 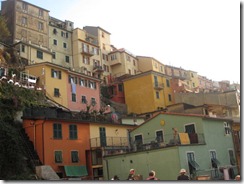 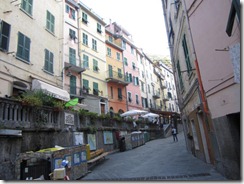 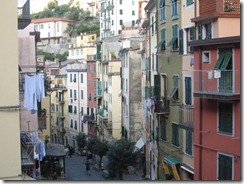 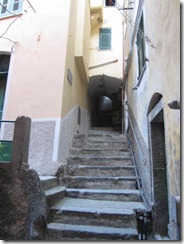 La Cambusa in Monterosso a Mare. This Old Town restaurant, which shares the main square with a number of others, had what we were looking for. I was anxious for fresh swordfish steak. La Cambusa prepared it well with a light tomato sauce with garlic, parsley, anchovies and capers. Joyce, meanwhile, was in the mood for a fresh seafood frito misto with calamari, shrimp and anchovies. Both were very nice. And, as important as the food, our lunch gave us all the excuse we needed to try a bottle of the local dry white wine, Cinqueterra Vino Blanco. This 2010 wine from LaPolonza, was light and refreshing. Overall, a pleasant lunch in an atmospheric section of Cinque Terra’s primary beach town.

Dau Cila Ristorante in Riomaggiore. The restaurant, just above the shore, provides nice views and ambience on its patio. Its food is even better. We began with three giant langoustines baked with tomatoes, onions and basil. We then shared a delicious whole grilled sea bass and another bottle of Cinqueterra Vino Blanco. While our first taste of the wine (see above) was from grapes from across the Cinque Terra region, our server suggested that we try a wine from a local producer that uses grapes from a single appellation. So we tried and fully enjoyed Walter de Batte’s Riomaggiore-sourced wine. We finished up by tasting two local desert drinks, a Lemoncino (Northern Italy’s response to Lemoncello) and a sciacchetra late-harvest desert wine. While we both enjoyed the Lemoncino, Joyce felt that the sweetness of the sciacchetra made it taste fortified (which she does not like). While it isn’t my favorite dessert wine, I enjoyed it more than did Joyce. 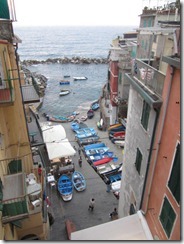