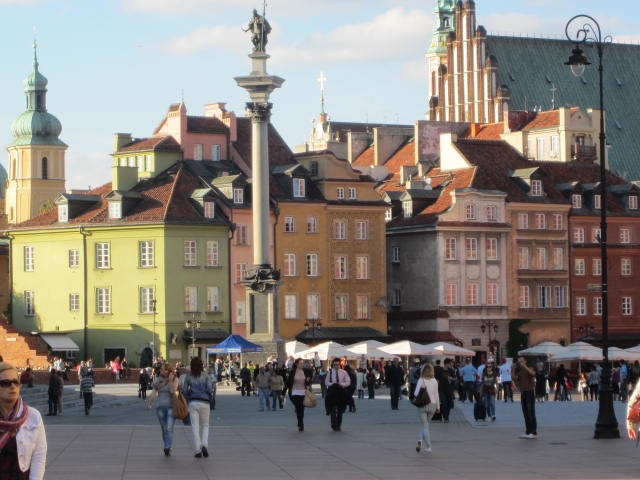 It is hard to escape the rivalry between Krakow and Warsaw–or the contrasts. The rivalry effectively began in late 16th century, when King Zygmunt moved the county’s capital from Krakow to Warsaw. It intensified after WW II.

While Krakow survived the war largely intact, Warsaw was almost totally destroyed. Hitler leveled the Jewish Ghetto when some of the Jews had the audacity to resist their forced move to Treblinka. He destroyed most of the rest of the city, including about 85% of the historic Old Town and New Town areas at the end of the war, out of spite. Although the Russians were sitting on the outskirts of the city during the destruction, they chose not to intervene.

When the Russians finally took over the destroyed remains of the city, they embarked on a rebuilding program to restore the good will and the civic pride of the city’s residents. On one hand, they did an incredible job, not only of rebuilding, but effectively replicating the historic detail of the Old Town and New Town areas. Old Town, in fact, is the only reconstruction to be designated as a UNESCO World Heritage Site. The problem was, they funded the reconstruction of the city largely by taxing the residents of the rest of the country, including Krakow.

The differences between the cities are manifested in more than their historical slights. Krakow is largely a liberal academic city (students account for 20% of its population) that caters to tourists. It discourages heavy industry )which has effectively been banished to the more industrial Nowa Huta, on Krakow’s outskirts), regulates businesses more tightly and enforces conservation of its historic buildings. Warsaw by contrast, is a more conservative, business-friendly government center. And, other than its reconstructed historic areas, it consists largely of a combination of drab Soviet-era buildings and a rapidly growing number of modern commercial buildings.

The historic areas of Warsaw, however, are pretty and pleasant. We saw these, and learned about the history, with the same tour company we discovered and were so pleased with in Krakow–FreeWalkingTours.com. We had an equally good experience in Warsaw.

The tour began in the huge Plac Zamkovy, with King Zygmunt’s Column, the Reconstructed Royal Castle. This was followed by a roundabout trip, past the modernish Cathedral Basilica, a couple of lovely, more traditional churches and a pretty residential neighborhood to the lovely Old Town Square. 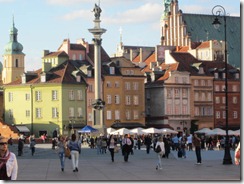 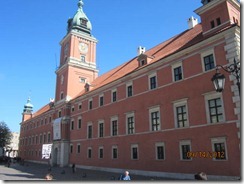 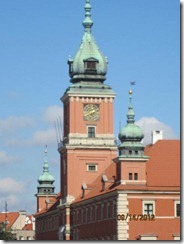 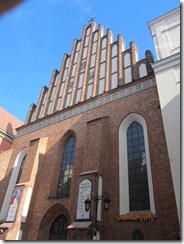 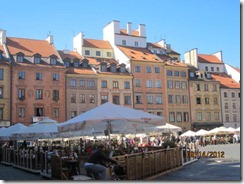 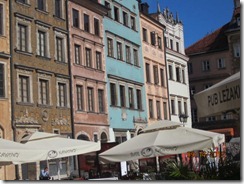 Heading up to the Barbican and the little of what is left of the city walls, we headed east by a number of historical buildings. Including the house where Marie Currie was born and lived before marrying Pierre and moving to France. (The couple’s daughter, Irene, and her husband Frederic followed her parents by both earning PhDs and winning Nobel prizes for their own work in radioactivity.) The house, now adorned with a mural (mother and daughter and symbols for two of the elements they discovered), is joined by many other beautifully restored and decorated private homes. 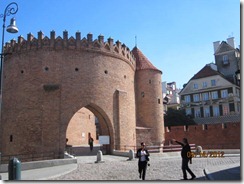 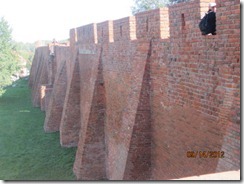 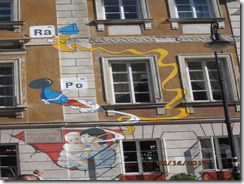 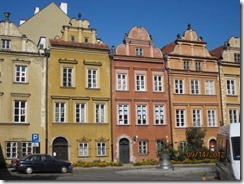 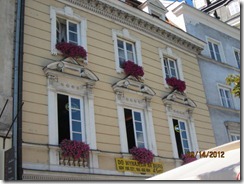 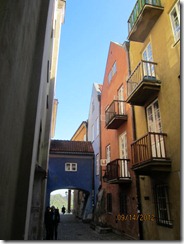 The Old and New Town areas also contain a number of grand buildings and palaces, such as the Colligium Nobilium, the old Russian Embassy (now EEU offices) and the modern Supreme Court Building. 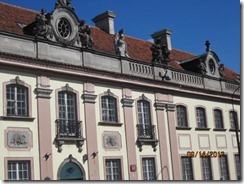 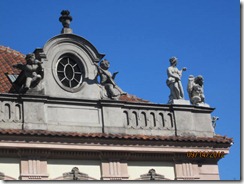 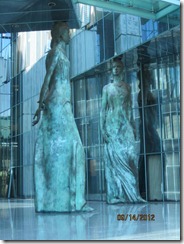 We spent time at the original site of the Jewish Ghetto (leveled, as discussed above, near the end of WWII), where our guide vividly expressed the horrors of a period when Jews, who were forced to live on 7 ounces of bread per day and continually lured (with promises of a “better life”) to the Treblinka concentration camp, mounted a valiant but doomed resistance. Between the living conditions, starvation, disease, lack of medical treatment, the concentration camps and the retaliation for the resistance, 330,000 out of the ghetto’s 400,000 total inhabitants eventually perished. This and other attempts at Polish resistance are commemorated at the poignant and impressive Resistance Monument. 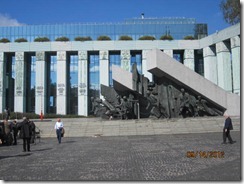 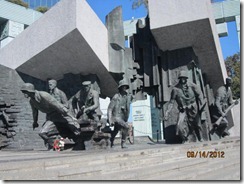 On a much lighter note, was an "audio tour" of a few of the city’s 16 Chopin Benches, where you can relax and, at the touch of a button, be entertained by a selection of short Chopin pieces. After a stroll down Warsaw’s version of Fifth Avenue (Krakowskie Przedmiescie), the tour ended at the Tomb of the Unknown Soldier. 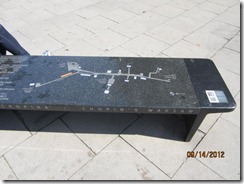 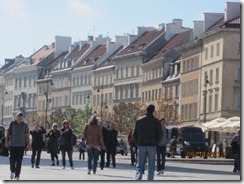 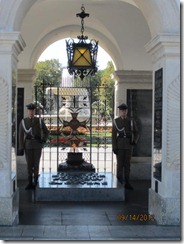 While the sights were certainly interesting, the tour, as was the case of those in Krakow, was largely a vehicle for explaining the city and the country’s history, culture and politics, as well as for passing on some interesting trivia about some of Poland’s heroes and unexpected contribution to world culture (Chopin), cuisine (including Turkish coffee and croissants) and science. While we all know about Copernicus, we did not know of the four Nobel Prize winners in the Currie family.

After lunch, Joyce and I continued our own tour, through Srodmiescie (the section of the city in which German officials lived during the war (a section which, not surprisingly, escaped the destruction visited on its neighboring Old and New Towns), and then through a couple of city’s large parks, its Botanical Garden and more churches. 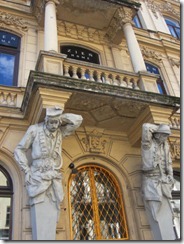 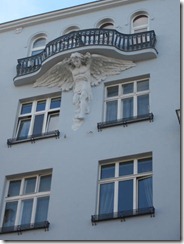 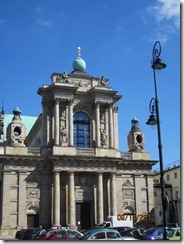 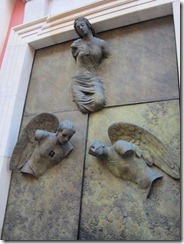 Unfortunately, our short time in the city prevented us from visiting some of the city’s museums, surviving unrenovated historic neighborhoods, such as Ul Prozna (on the outskirts of the old Jewish Ghetto) and Praga (a working-class neighborhood that is emerging as an arts center and center of a number of the city’s hottest clubs).

We combined the comforts of the modern with the charm of the historic by staying in a high-end modern hotel (mamaison) in the Old Town section of the city.

We ate at two of Old Town"s finest restaurants: 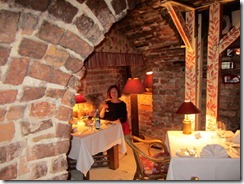 We also had time for one lunch:

While walking home from our first evening’s dinner, we were seduced by the sounds of accordions playing polka music. We just had to stop for a drink the Plac Zamkowy polka bar. The bar was packed, the accordion (accompanied by guitar and bass) cranking, people dancing and everyone (inclining me with my vodka and Joyce with her wine) having a grand time. While we had to get in early for our second night (due to an inhumanly early morning train to Berlin), we did manage to squeeze in a drink (another Polish vodka and a local beer) in one of the open-air cafes in the lovely, fun Old Town Square, where we were entertained by children playing and street musicians performing. 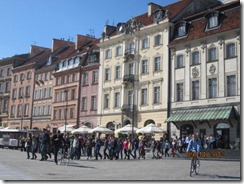 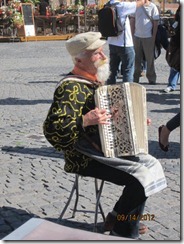 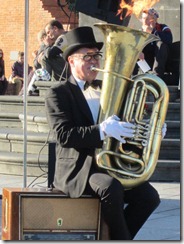