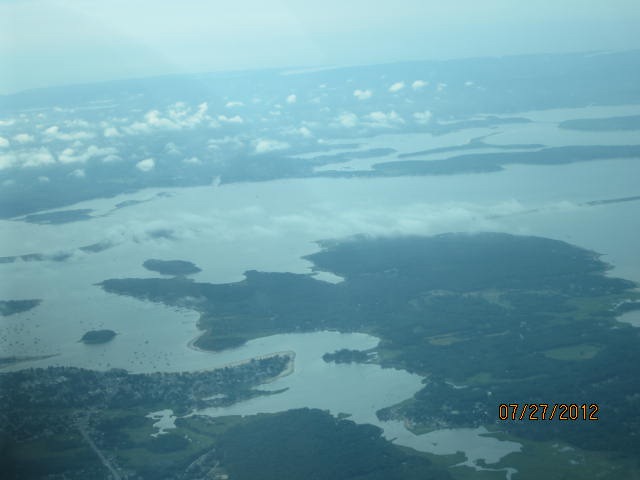 Although we have never really frequented The Vineyard, we have been the at least half a dozen times and we still love the character of the towns (especially Edgartown and Oak Bluffs) and the opportunity to bike scenic, lightly travelled, rural roads and bike paths.

Unfortunately, now that we lie on the West Coast, our trips to the Vineyard are less frequent. (We now have to split our New England time among such favorite places as Boston, the Maine Coast, Vermont, New Hampshire’s White Mountains, the Berkshires, Cape Ann, Cape Cod, Nantucket and the Vineyard. And that doesn’t even count areas to which we do not manage to return, like rural Connecticut, Newport and Block Island.)

So we approached this chance to return to the Vineyard with great anticipation. The trip began ominously. It was a cool, drizzly and overcast morning as we boarded our plane in Boston. As soon as we took off, we were in the clouds. The forecast was for was for three days of the same, punctuated by severe thunderstorms.

So began our first trip to the Vineyard in about five years. But as we approached Cape Cod, the thick cloud bank began to dissipate and by the time we reached the vineyard, it was just slightly overcast. This soon burned off and the rest of the day was generally sunny, hot and humid–with no rain. The second and third days were someone overcast. While sunbathers may not have appreciated this weather, we, who prefer to spend our days biking and walking the island, we’re in our glory. As for the rain, we did experience once–on the second night, about a half hour after we returned to our inn for the evening. Our primary objectives for this all to infrequent return trip–get reacquainted with some of our favorite spots, bike as much of the island as we could, and devour as many lobsters, lobster rolls and fried clams as possible before returning to the lobster/clam deprived West Coast.

Although we accomplished most of our objectives, lingering effects from a bad sciatica attack limited, but certainly didn’t eliminate our biking activities. So did our falling in love with a painting by a young, promising island artist, Traeger di Pietro, which “forced” us to add trips among towns and galleries to see more of his work and to end up stimulating the island economy far more than we had planned, so that we could take home our own tiny little slice of the Vineyard.

But, for all these “challenges”‘ we had a great trip. As discussed in our next blog, we spent most of our time in and biking among the three towns of:

Even so, we still, as discussed below, did have time to become reacquainted (albeit briefly) with West Tisbury (for its galleries and farmers’ market), Menemsha (especially the wonderful Larson’s Fish Market), Chilmark and Aquinnah (especially Gay Head).

Our first stop, after checking in at our B&B, was West Tisbury, with two of its nice galleries; the the Granary and especially the Field (with its quirky sculptures). Saturdays, meanwhile, finds a wonderful farmers’ market at the Grange Hall. On Sunday, it houses an artisans’ market. If you run out of things to do, Alley’s General Store and farm market has something for everyone (especially the kids) and the next-door 7a Foods has enticing pastries. Somewhat further out of town, you can find the island’s favorite dairy, the Grey Barn, and the Polly Hill Arboretum. Although the town of Menemsha isn’t much, it has a lovely harbor, a handy little ferry to bring bikers to and from the road to Gay Head, and our primary draw for this trip, two very casual, iconic and inexpensive Vineyard take-out restaurants–Larson’s Fish Market and The Bite. Our original plan was to get a lobster at Larson’s and then to walk across the street for fried clams at The Bite.

Then came our first change of plans. We were too tempted by too many things, and an all to attractive a lobster price at Larson’s to have room or time for Stop at the Bite. We began by sharing a dozen local oysters, a cup of clam chowder (which was, disappointingly more like clam broth with a little milk, potatoes and a generous dose of chopped clams, than a true chowder), followed by our inaugural lobster–a 2.5-pounder. The fried clams would have to wait for another day. Chilmark is primarily a residential community. While it doesn’t have much of a downtown, it is lovely, with some beautiful homes, ponds and views, especially over Chilmark Pond. For us, it was primarily a scenic pause on the way to Aquinnah and the white clay cliffs of Gay Head. Most of the rest of our time on the Island was, as discussed in our next blog, spent in and biking among the island’s three primary towns: West Tisbury, where we stayed, and especially our favorite towns of Oak Bluffs and Edgartown.