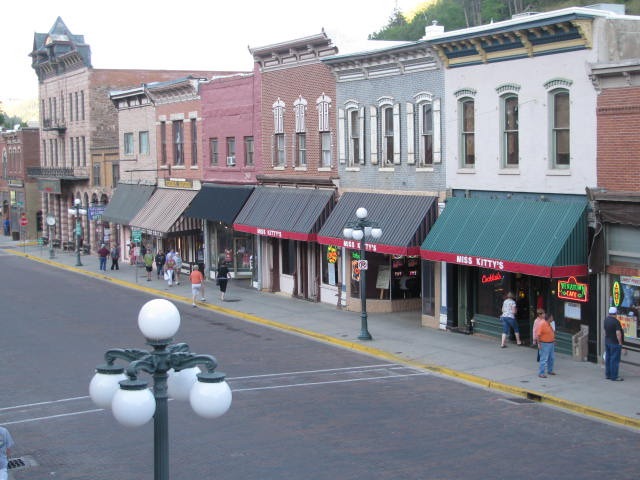 Deadwood South Dakota is a beautifully restored National Historic Site. It is fun, historically fascinating and located in the beautifully scenic and activity-rich Black Hills (see our August 10 blog) and within easy driving distance of a number of interesting day-trips (in our August 31 blog). It is also a place of legend, and of a very different reality.

While today’s Deadwood is a tourist magnet, this was not always the case. In the late 1800s through early 1900s, the town—and especially the historic downtown district, often referred to as the “Badlands”, was dirty and dangerous. Though much of the mid-1900s, as the gold mines began to stop yielding their riches, and especially after a major 1959 fire, the town was in rapid decline. It was not until 1989 that the “Deadwood Experiment” began to turn the city around.

These vices continued well into the twentieth century. Prohibition was virtually ignored and the last brothel was not closed until 1980. The gold, however, didn’t last. The town went into a dramatic economic decline and the buildings fell into disrepair. It took a 1989 act of the South Dakota legislature to turn things around, by making Deadwood the third site (after Nevada and Atlantic City) to authorize gambling. And it designated much of the proceeds of this gambling to revitalize the city and its historic buildings. 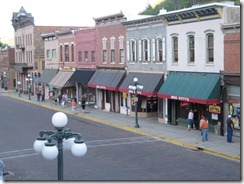 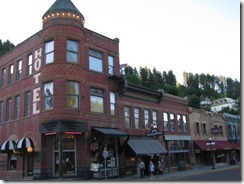 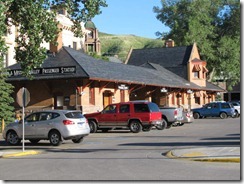 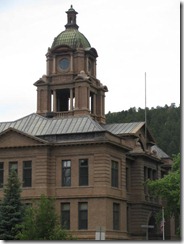 The Three Faces of Deadwood

You don’t want to spend too much time in Deadwood, and can’t expect too much from the food. But for a short trip, with managed expectations, you will find it fascinating and fun. But to fully appreciate the city, you should understand that there are really three very different Deadwoods: 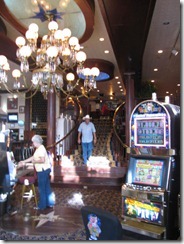 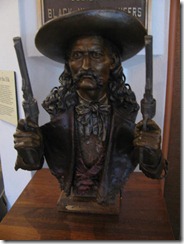 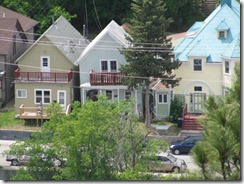 Attack of the Legends

Although we had no interest in gaming, either in participating or in learning about it, we do enjoy learning, being entertained and combining the two. We, therefore fully embraced learning modes 2 and 3.

The legendary Deadwood can be glanced in a short stroll down Main Street, an immaculately restored, nearly traffic-less thoroughfare, complete with historic markers, such as those denoting where Wild Bill was shot, where his killer was captured and later tried and acquitted (before being recaptured, retried, hung and buried with the rope still around his neck). 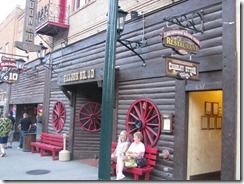 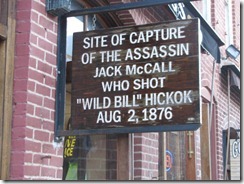 But you had better keep your wits about you on such a walk, less you be run-over (especially at 7:30 PM) by an actor portraying Jack McCall (the assassin of Wild Bill), running out of a saloon, before being apprehended. Or at 2:00, 4:00 or 6:00, where you may be caught in the middle of one of three reenacted gunfights. And if you want to see more, you can listen to Wild Bill speak of his life–before being shot in front of you (four times a day!) or watch a reenacted trail of Jack McCall (at 8:00 PM, conveniently after the last of his last shooting of the day and his on-street capture.) 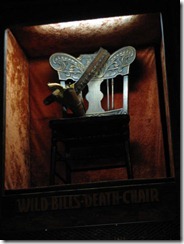 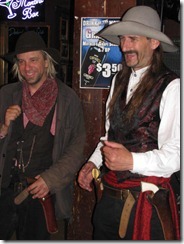 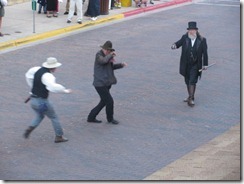 If you prefer your legends to be served with a somewhat larger dose of facts–and get a tour of the city and the cemetery to Boot (Boot, get it?), you can board one of the many one-hour tour buses.

Don’t get me wrong. We fully enjoyed walking Main Street (several times), looking into beautifully, but somewhat overdone recreations of glamorous 19th-century casinos (especially at the Kevin Costner-owned Midnight Star), stopping for drinks and watching the reenacted assassination at the much more casual, and wonderfully kitschy (complete with the chair in which Wild Bill was shot) Saloon #10, and listening to the corny jokes of the bus tour driver (Kevin Costner’s Original Deadwood Tour–which we chose based on the convenience of the time and the lunch discount at Costner’s Diamond Lil’s (also in the Morning Star).

If you get the idea that we spent a lot of time with Kevin Costner and at Saloon #10, you are right. The upstairs of these casinos also contained what we were told we’re the best restaurants in the city–Jakes and The Deadwood Social Club, respectively. (While both were respectable and provided good service, the food, at both, was decent, but far from inspired.) We could have, if we had chosen, spent even more time with Costner, as by visiting his new educational attraction, Tatanka: Story of the Bison.

If the word “Tatanka” sounds familiar, it should, it was the first Indian word Costner’s character learned in Dancing with Wolves, which he also directed. And speaking of recycling names, do you remember “Jake”? That was the name of his character in Silverado. And “Midnight Star? That was the Silverado saloon. (You are reminded off these and many other Costner movies in all the promo posters and memorabilia mounted throughout the casino, bar and restaurants.) 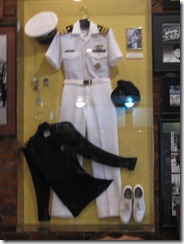 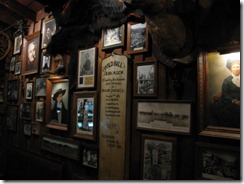 The Facts and Nothing But the Facts

Although the legends and the reenactments are certainly fun, and there is certainly a fair amount of truth in all of them, we also like to learn the truth behind the legend and something about the part of the history that is not sufficiently glamorous to make its way into legend. The Adams Museum and House provides all of this.

It begins with discussion of the reality of the legendary characters:

Where did the legends come from? Partially from local and eventually national newspapers looking to boost circulation, from a proliferation of dime store novels and from the promotion attributable to temporary roles in Buffalo Bill’s Wild West Show.

The museum does much more than clarify the legends of Deadwood. It also discusses the town’s large populations of Chinese and Jews and the roles they played in building the city. The Chinese, for example, we’re not allowed on the streets after dark and we’re forced to walk through underground tunnels. A number of Jews, such as Sol Star and Seth Bullock (a fellow Rough Rider with and close friend of Teddy Roosevelt) build some of the town’s largest stores and most luxurious hotels and played key roles in governing the city. And then there is the story of the miner who celebrated the sale of his gold mine claim for the princely sum of $70,000. The claim, which was sold to the father of William Randolph Hearst, turned out to be to the Homestake Mine–the second largest producing gold mine in U.S. history. 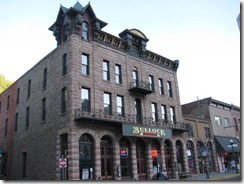 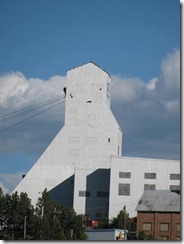 The museum also discusses and shows, in well-crafted models, the history of the town, the roles of different forms of transportation (from bull trains to stagecoaches, Calistoga wagons and ultimately trains) in building the city, the evolution of education (from home schooling, to one-room schools, neighborhood school and district schools) and the lives of the “normal” hardworking people who lived outside the notorious “Badlands” section of town—including the upscale Presidential district with its mansions and early luxuries (including the town’s first washing machine). And then there were some of the town’s curiosities. There is, for example, Wild Bill’s original cemetery monument (or at least what left of it after memento seekers took what interested them).  Most unique among them, a stuffed model of a real two-headed calf (a one in 10 million phenomenon) prepared by a local taxidermist. 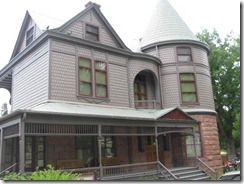 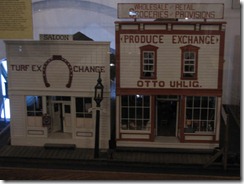 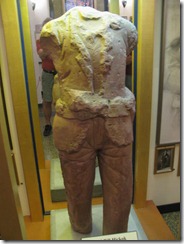 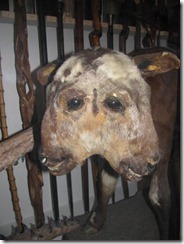 Where To Stay in Deadwood

Although we, as discussed above, ate at what are generally thought to be the two best restaurants in town—The Deadwood Social Club (atop Saloon #10) and Jakes (the top floor of the Midnight Star), we found both to be only satisfactory. The menus were generally less than inspired and while meat (as would be expected) is fresh, the seafood (also as would be expected) is less so.

Our hotel rom, by contrast, met all our expectations. From our research the town has two premier hotels—Martin & Mason and the recently renovated Franklin. We stayed at the lovely, boutique Martin & Mason. While the lobby is populated with the same slot machines as all others, the cashiers cage (which is shared with the hotel’s check-in window, has the charm of a 1900-vintage original. The recently renovated room was spacious, comfortable and populated with pretty and functional oak antiques (or at least, very good reproductions). What really stood out, however, was the service. The staff remembered all the guest’s names, offered to help in all types of issues. When we checked in, we were shown where coffee and scones would be each morning (right outside our room) and when we asked if they offered tea, they brought our own electric teapot to our room. Although the big things—like the quality and comfort of the room are certainly critical, it is often the little things (like the consistent, thoughtful service) that really sets a hotel apart. 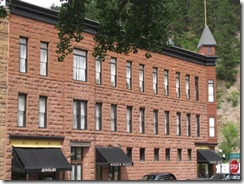 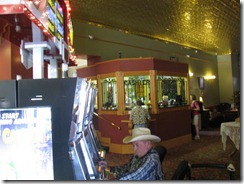 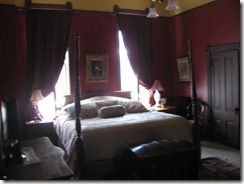