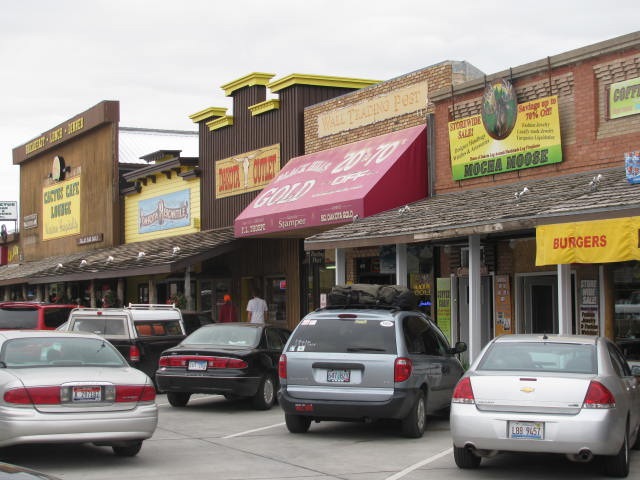 We began our Badland South Dakota tour in Wall South Dakota, just north of the park’s Pinnacles entrance. The town, as you see on billboards every few hundred feet on the 55 mile drive from Rapid City, is dominated by the Wall Drug store. Once upon a time, it began life as a small-town drug store. It is now a huge, extraordinarily touristy, very busy, and very kitchy conglomeration of tourist shops, that cover both sides of a city block.

After ten minutes, we had enough. It was time for the main event. We then took the back entrance into the park, by way of Sage Creek Road and “Prairie Dog Town”. Prairie Dog Town is a field pocked with prairie dog burrows where you can spot dozens of the cute rodents standing up to survey the area, a handful of buffalo grazing peacefully nearby, and dozens of bighorn sheep, pronghorn along the road and through the craggy landscape.

Badlands National Park is the undisputed star of the area, filled with formations of incredibly eroded limestone peaks where soft rock and popcorn-like clumps of clay have been eroded by millennia of wind and water into eerie landscapes filled with buttes, pinnacles, and toadstool-like Hoodoo formations.

Closer looks at the textures of the rocks, the soil and the popcorn-like formations that cover many of the Badland’s surfaces are almost as interesting as the broad vistas.

The colors are as varied as the shapes, ranging from stark white, to reddish and a bright yellow. (And this was just in the middle of the day, rather than at sunrise and sunset when the colors are supposed to be much more varied and intense.) Many of these colors are from the remnants of ancient forests that have long since been buried under rock and are now exposed by the forces of erosion.

Throughout southern sections of the park, and in the visitors center, you also get a chance to see fossils from billions of small invertebrate sea creatures that inhabited the shallow sea that once covered the area, and also of prehistoric ancestors of horses, rhinos, and other types of animals that had lived in the region in the millennia after the land rose and the sea receded.

The visitor center tells the story not just of the formation of the land and the fossils, but also of the Native Americans who made their lives on and worshiped this seemingly inhospitable space for more than 10,000 years.

Badlands is beautiful, fascinating, and more than worth a day trip that is a mere one-hour drive along the I-90 expressway from Rapid City. Unfortunately, however, we had time constraints. (We had to stop back in Rapid City on the way back, and then drive an additional hour to the Black Hills.) And, since we decided to drive back via a somewhat slower, more scenic route (SD Rt. 44), we missed three things we would have really liked to do:

Although we would like to say that we will do these, plus make up for the stops we missed in the Black Hills, we cannot. Although the southwest South Dakota (especially the Badlands and the Black Hills regions) are beautiful and fun, they are also quite remote. In reality, this is likely to be our only trip to the area. So, if we had it to do over again, we would have added one more day to the trip.