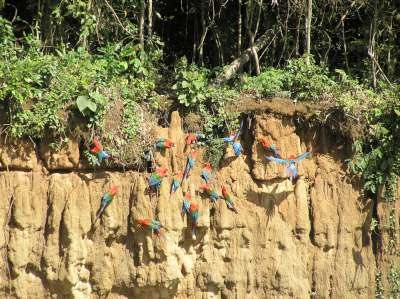 We just returned from our second trip to South America and our fourth crossing of the Andes, Each of the four experiences were totally different. These included:

The three most interesting trips were by a small, six-passenger plane, by foot and by bus. 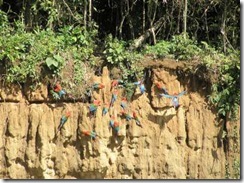 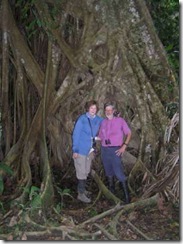 Our first trip over the Andes was a pretty, but relatively uneventful flight (at least after a series of delays and questions if the weather would clear enough to allow us to fly at all) from the lovely mountain city of Cusco Peru, to Manu, a tiny grass runway on the banks of the Amazon. The destination was a luxury eco-camp where we cruised the river, viewed parrots eating detoxicants on a mineral-rich cliff side, spent a night in a forest blind watching tapirs wallow and feed, ate termites and otherwise had a great experience.

The return trip was another story. We were scheduled to leave the morning after a torrential downpour had swollen the river and filled the sky with a dense cover of threatening clouds. Once our boat (after a two-hour upriver cruise) arrived at the tiny airstrip for our return flight, we learned that the combination of the clouds, the wind and the rain-soaked grass runway made it unlikely that the plane would be able to make it in to pick us up, much less take off. Bad news, since we had to return to Cusco for the primary destination for the trip—a four-day hike along the Inca Trail to Machu Picchu.

After hours of delays, the plane finally did arrive. But, since it was loaded with an unusually heavy load of gold from a nearby mine, we were told that even if the weather did clear, the heavy load would probably require too much runway to enable it to safely take-off from the rain-soaked mud ruts. (Don’t even ask about the type of “accommodations” that were available to stranded eco-tourists.)

When they finally announced that the weather had cleared enough for a brief take-off window, we were, with some trepidation, rushed out to the plane. As if we weren’t concerned enough, we had to wend our way through a line of boys, equipped with cut-plastic gallon bottles shaped as bailing buckets, running ahead of the plane, scooping water out of the ruts that used to be (and hopefully soon would be) a runway. After the take-off, with uncomfortably little clearance between the plane and the forest, there was a palpable sigh of relief—not just from passengers, but we thought, also from the pilot and co-pilot. While we suffered from only modest turbulence and some heavy breathing through our deployed oxygen bags, over the Andes, we landed, without incident and with enough time in high-altitude Cuzco to acclimate for our Inca Trail hike. 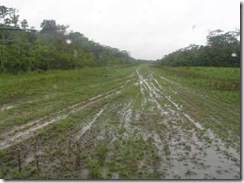 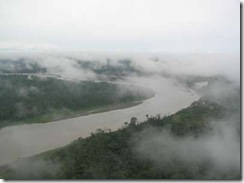 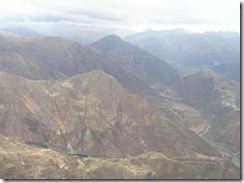 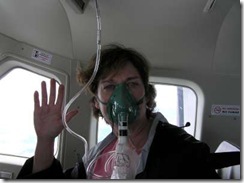 It was only after we landed that the plane’s co-pilot, whom Joyce had befriended at the Amazon “terminal”, told us just how hazardous the take-off really was. From foresight, we probably would have boarded had we known. From hindsight, we were kind of glad that we had not known.

Our hike wasn’t exactly across the Andes. It was actually a four and a half-day trek along the Inca Trail to Machu Picchu, in the heart of the Andes. But a bit of artistic liberty never hurts.

The classic, 50-plus mile trek ends at a lower altitude (7,970 ft) than it begins (8,500 or 9,200 ft). Depending on where you begin, the trek consists of a series of steep inclines and declines, including the highest point of the trail at just below 14,000 feet. It is a tough hike that requires acclimation to the altitude and lots of cocoa tea, which helps prevent altitude sickness. But the rewards make it worthwhile. These include the incredible views, the many ruins you pass along the trail, and the intricate set of stone steps that covers particularly difficult parts of the trail. 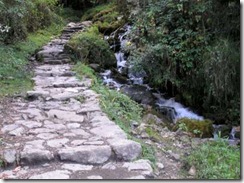 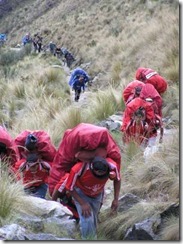 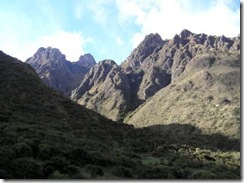 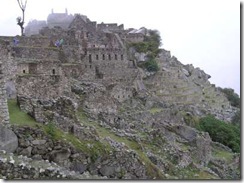 Two particularly memorable rewards were more attributable to the guide, porters and chefs (of whom totaled 10 for four hikers). The porters, who carried everything from tents to stoves and dozens of eggs, were amazing. Starting out from the same camps as did we, they raced ahead (carrying up to 50 pounds apiece), set up camps and had our meals ready for us by the time we arrived at the next camp. Then, when we left for the next leg of our hike, they cleaned up, repacked and caught up to and passed us about an hour into the hike, only to meet us at the next camp, with our tents set up and meals being prepared. (The meals, by the way, were three-course affairs, including eggs in the morning, fresh meat and vegetables at night and, on the last night, even a cake that was baked in an oven that the porters carried the entire 50 miles.

Finally we made it to one of the most iconic rewards of the trek—the classic sunrise view of Machu Picchu from the Sun Gate. Unfortunately, all we saw was  mud, rain and an early morning blanket of fog resulting from the previous night’s torrential downpours.

We did, however, see plenty when we arrived at the ancient village and toured the beautifully reconstructed remnants. In the end, the rewards—both to our psyches and our appetites—far outweighed temporary inconveniences, such as the leaden legs and straining lungs we experienced in scaling each high-altitude pass, the soaking clothes from one day and night of heavy rain and even one night of the worst diarrhea I ever had.

In fact, it turned out to be one of the most rewarding experiences of our lives.

The next most interesting crossing, by bus, was the most relaxing of the four. We briefly thought about renting a car and driving over the Andes, from Mendoza Argentina to Santiago Chile. Our very helpful Mendoza wine guides (Uncorking Argentina) highly suggested taking a bus, which was not only less expensive, but also freed both of us to work, enjoy the views and otherwise relax.

The bus was very comfortable, with large seats that reclined to about 35 degrees, lots of leg room, leg rests and, for those who wished, blankets and pillows. The steward, porter or whatever one wishes to call him, offered coffee and tea in the morning, sandwiches and soft drinks (although we brought steak left over from the previous day’s dinner and a bottle of cab and a bag of pistachios from our previous day’s visit to Caelum winery (see our blog on Mendoza). He also helped non-Spanish speaking passengers through the immigration forms.

But as easy and comfortable as the trip was, the highlight—and primary reason that we wanted to drive rather than fly—was the incredible view of the Andes, including some of it’s still snow-capped peaks, valleys and hairpin-roads (which made us particularly grateful that someone else was driving) down from the pass, to Santiago. 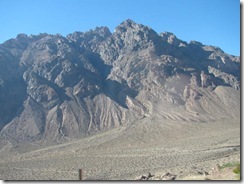 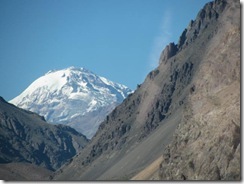 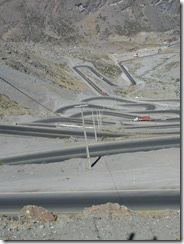