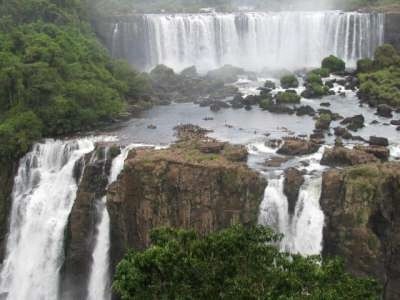 Iguazu Falls is a huge waterfall, consisting of dozens of cascades, that span the Amazon River between Brazil and Argentina, touching a corner of Paraguay. The falls, which are spread across 1.6 kilometers and reach more than 100 meters high, are awesome,

They can be seen from either–and should be seen from both–sides of the river. We did so by arranging for a car ($140) that picked us up at Brazil’s Iguazu Falls airport, drove us a few kilometers to the Brazilian park’s entrance and waited (with our luggage) for two and a half hours, while we viewed the park, and then drove us through customs, for the hour derive to the entrance to Argentina’s Iguazu Falls Park and our hotel (the Sheraton) that is located inside the park.

The Brazilian side offers the grandest, most panoramic view. The park entrance, a few kilometers from the airport, contains an ecological exhibit (that shows, among other things, the incredible amount of deforestation that has eliminated 70 percent of the forest in a mere 40 years) and a station from which you catch a shuttle bus into the park. You are let off at the first viewpoint, with your first view of about a dozen different cascades, and the head of roughly 1.5 kilometer trail along the rim of the river. Every curve takes you to different views and glimpses of another cascade.

By the end of the gradually descending trail, you reach the highlight–the huge Devil’s Throat cascade that alone, is roughly the size of Niagara’s American Falls. You view the cascade from several viewing points, culminating in a catwalk built over the river which, if you don’t mind a shower of refreshing mist from the falls, provides a great bottoms-up view of the majestic falls. You end the trip with a short elevator ride, up to a viewing station over the entire spectacle

After arriving at the Sheraton, we had a couple celebratory drinks on the balcony with a lovely distant view of one of the larger cascades. We then went for a generally wonderful dinner at the hotel’s restaurant (see below).

We then spent the full next day in the Argentinean park.

The reports I read were correct. Although we were able to visit only three of the four primary trials (the ferry to San Martin Island was closed due to high water levels), we couldn’t have wished for much more.

The 6/8-mile Upper Circuit trail provided views of six separate cascades, with each more majestic than the last. The last stop, in particular, provides an incredible view of four cascades which, creates a roughly kilometer-long white lace veil between the emerald forested mainland and San Martin Island. 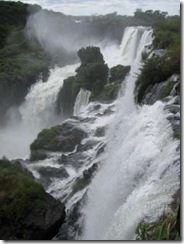 The Lower Circuit, which is about the same length as the Upper Circuit, takes you down, closer to the river past a smaller number of slightly less dramatic, but equally beautiful falls.

We saved the best for last. Although we missed San Martin Island, the view from the Argentinean side of Devil’s Throat is magnificent. After a fifteen-minute ride on a packed narrow-gauge train, we followed the crowd on a slow, somewhat frustrating one-to-two kilometer long catwalk over the river, with crowds of people walking, stopping and taking pictures all the way. It was well worth it. The catwalk took you straight to a heads-on view of the full majesty of all of Devil’s Throat’s cascades. Absolutely awesome! And, after a long, hot, humid walk, the heavy mist shower was welcomed and very refreshing.

Although David was very disappointed with the rather expensive buffet, we all loved Joyce’s and my first night meals. Joyce had a huge portion of grilled Sarubi, a firm white river fish with a rich taste that is somewhat reminiscent of Hawaiian butterfish. I had a similarly large, and equally delicious Rib-Eye steak. Although neither dish was complex or had exotic ingredients, both started with wonderful ingredients and were cooked perfectly (medium rare). We shared a very nice bottle of Terrazas Reserve Malbec.

After our day at the Argentinean Falls, we were more than ready for a couple beers on the balcony (with, of course, a view of the falls), a tour of the exercise room, a swim and another, final dinner at the hotel’s restaurant. While Joyce stuck with her Sarubi, I switched to lamb chops. David, however, decided to shun the buffet in favor of a Rib Eye. Although we were all satisfied, I did prefer the Rib Eye to the lamb chops, which were more medium, than medium rare.

The next morning we left for the the primary justification for and the highlight of our three and a half-week trip—Rio and Carnival!