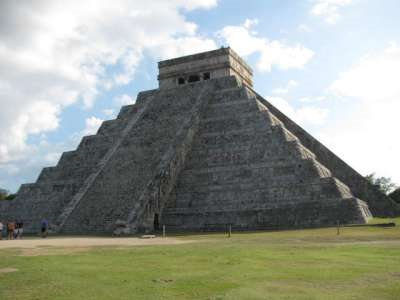 Although we had been to Chichen-Itza more than 30 years ago (yes, we are indeed that old), we have long wanted to return. Since we had to be in Cancun anyway, this was an ideal time. The site, whose name is Mayan for “well of the warlocks of the water,” was the primary temple of the Mayan people, a civilization that spanned four countries (from Mexico to Nicaragua) and more than 3,000 years.

Begun in 499 AD, the site contains the well after which the site was named, more than 400 visible structures (the vast majority of which have not been reconstructed) plus many more that were under, or inside the visible structures. It was designed around advanced architectural (with precise measurements and angles), astronomical aligning to the sun and the equinoxes) and civic (underground aqueducts, cisterns, etc.) principles and its construction, while a bit worse for wear, has admirably stood the test of time.

Although only a select few actually lived at the site, it was the spiritual center of the Mayan civilization and the spiritual, ceremonial and civic center of a community that grew from about 40,000 people at the start, to about 250,000 at its peak.

The Main Temple is primary and most iconic building of the complex. The 90-foot tower, with 364 steps plus a platform (the 365th step) represented the days of the Mayan calendar, which was, at that time, the most accurate in the world. Designed for acoustics, temple was the most holy site from which the high priest addressed the people. 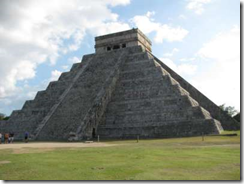 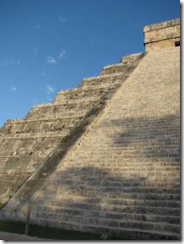 The Ball Court was both an elaborately carved and painted entertainment complex and a means of settling disputes among communities, as an alternative to wars. The complex sport, which involved two teams, of seven elaborately dressed players apiece, each trying to launch a rubber ball through a roughly one-foot diameter ring, using only their hips, forearms, and legs (i.e., without using either their hands or feet). Although the rings at most courts were only a few feet off the ground, those at Chichen Itza were a “modestly” more challenging 18 feet off the ground. (See YouTube for a view of the game). 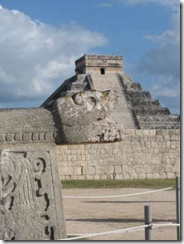 The Skull Rack, which was originally used carved representations of skulls to honor the dead, ok on something of a more sinister role in the later years of the Mayan empire, when the Mayans struck an alliance with the much more warlike and brutal Toltec, as a means of stemming their declining power. The Toltec used the rack to place stakes on which the heads of which vanquished enemies were displayed.

Speaking of the Toltec, the other two buildings at this part of the site were the province of the Toltec army–a headquarters of and barracks for the militia. 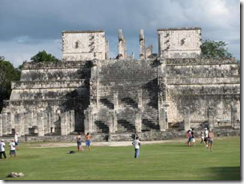 Among the other structures, to the south of the main complex, are the Observatory, the Ossuary, the Nunnery, Casa Colorada, and the other iconic structure of the site. 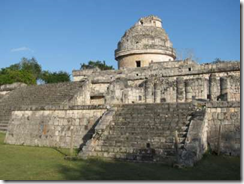 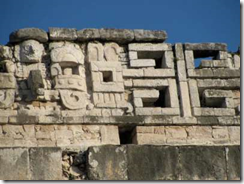 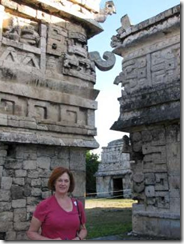