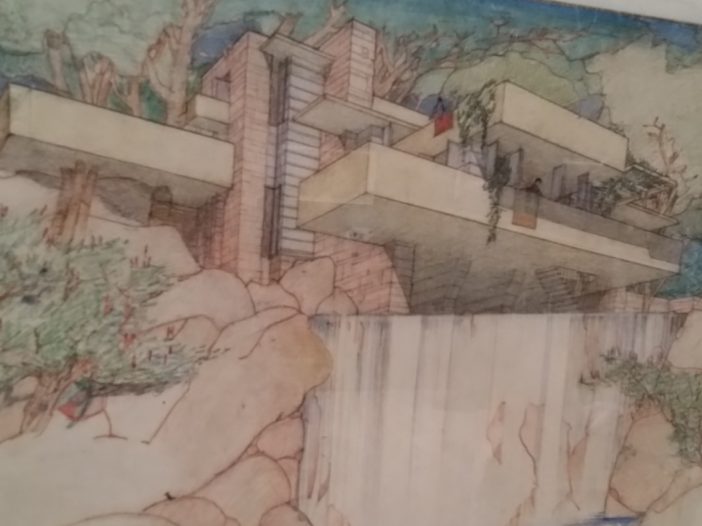 We first fell in love with Frank Lloyd Wright’s architecture in the 1970s when we lived in Chicago. Since then, anytime we travel near a spot where he built properties, we always try to at least see the property from the outside, and tour inside if it is available.

We even went to the spot in Tokyo where his Imperial Hotel stood. While it was one of the few major buildings to survive the 1923 magnitude 8.3 earthquake, it was demolished to make way for a new building. But for all of our Wright worship, we never quite made it to Pittsburgh, much less to the tiny town of Mill Run Pennsylvania to see Wright’s masterpiece, FallingWater.

But finally, we made it!

As Great as Anticipated

Seeing FallingWater from the outside was breathtaking. Seeing it from the inside and learning the nuances of the design, was inspiring. Standing on the deck, looking over the waterfall, in the company of the Kaufman family’s highly complementary Oriental sculptures, was practically Zen. And this was despite the October large crowds during the single busiest month of the year (more than 100,000 visitors come per year).

Falling Water was hailed as a critical and popular masterpiece since the day it was completed in 1939. It even graced the cover of Time Magazine. True:

But, heck, that is the price of buying, not to speak of living in, a piece of art.

To really appreciate the house and its seamless integration into and perfect harmony with its beautiful surroundings, several online virtual tours of the house detail its site, construction, exterior, and interior.

For the real experience, take the tour. Our guide, Melissa, was extraordinary: Knowledgeable, engaging, and extremely open. Too bad she had to turn us over to another person for the last segment of the tour who did little more than show us a video and deliver a cheap pitch for donating to the conservancy which manages FallingWater. Although we were prepared to donate before this pitch, our “closer” came off as being as schlocky as a timeshare salesperson. Not surprisingly fewer than one of ten groups from our tour ended up contributing anything to the fund for replacing the FallingWater windows and none joined the foundation.

While Falling Water was awesome and the tour wonderful, it was a shame the experience was ruined with such a cheap, unprofessional pitch.

While we were at FallingWater, we took the short 15-minute detour to Kentuck Knob. Wright designed the home 20 years later for the Hagen family, who were friends of the Kaufmans. But while FallingWater was a custom project, Kentuck Knob was one of Wright’s later Usonian houses, an effort to reduce the price of master architecture to make it affordable to more people.

Not that it was cheap, especially after the Hagen’s requested numerous upgrades to the original design. The total cost was $96,000 including Wright’s $12,500 design fee but excluding the $12,000 for custom George Nakeshima furniture and several thousand more for landscaping and planting trees on an entire mountainside.

The result was another lovely home. But reducing the costs required a number of compromises. The result was small rooms and in one case, a tiny (19-inch wide) hallway. Even so, Kentuck Knob, like most of Wright’s work, is beautiful in and of itself and not only blends seamlessly into, but also enhances nature.

A tour of Kentuck Knob comes with its own bonus, a chance to see the Hagan’s 43-piece sculpture garden, with sculptures from Oldenburg, Goldsworthy, and other artists.