It has been decades since either of us studied the Civil War and years since I last read about it (Doris Kearns Goodwin’s wonderful Team of Rivals). It was time to get back up to speed. And what better way to do so than to visit the visitor centers and tour the museums at the center of two battles that twice shifted the momentum of the war and lead to the beginning of the end.

Confederate Victories at Fredericksburg and Chancellorsville

The battles of Fredericksburg and Chancellorsville, as we learned (or relearned), were instrumental in allowing to Confederacy to regain military, psychological and political advantage after a string of losses to General Grant’s troops in the west and the south.

These, along with two other neighboring battles at Spotsylvania and Wilderness, left a swatch of Northern Virginia devastated and resulted in a total of 15,000 men dead and another 85,000 wounded. They also:

The Battle of Gettysburg

Then came Gettysburg. Going to Gettysburg is a humbling experience: 57,225 dead, wounded and missing in three short days. Visitors begin their Gettysburg experience with a movie that explains the context of civil war and the Gettysburg battle, a 130 year-old cyclorama that portrays the battle, and then a walk through an extensive museum that allows you to understand each of these, and get to know the experience in as much depth as you would like. 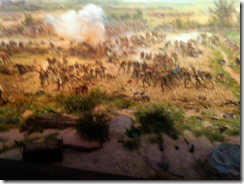 Next comes the really interesting part: A chance to drive through the entire battle scene in one of four ways. You can:

Although we initially planned to decide between either a bus or a personal guide, it became a non-decision once it was explained that a personal guide—who would drive us around in our own car–would cost less than a bus tour for two. Then, when we discovered that our guide not only went to and graduated from Gettysburg College, but also had an MA in history, we were convinced we made the right decision.

The two-hour tour, in which our guide took us through the entire three-days of the battle, was fascinating: Beginning at Seminary Ridge, through Cemetery Ridge and Culp’s Hill, through the Day Two at Little Round Top and the Wheat Field, and to the decisive and deadly Day Three site of the ill-fated Pickett’s Charge. Although it was impossible to remember the names of all the generals or keep track of all the landmarks from the different places from which they were explained, it was also impossible to leave without a feeling of awe for the men who endured such hardship for their beliefs, of an appreciation of the role of chance and blunders in shaping history and of the incredible sacrifice that so many men made over three incredibly long and deadly days. 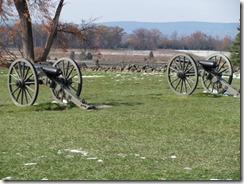 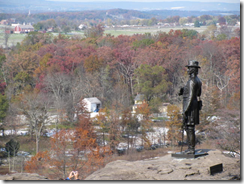 Our guide not only gave us a picture of the ebbs and flows of the battle and the individuals who shaped it, but also of the political calculations that went into the decision to take the war—which had been fought almost exclusively in Confederate territory–up into the Union stronghold of Pennsylvania. He explained the personalities behind the names of the generals, the motivations behind some of the key decisions they made and the relative roles of determination, strategy, skill and luck in deciding the outcomes of individual actions and of the entire battle.

It was totally fitting that the tour ended with a brief stop at the cemetery at which many of the dead were buried and at which Lincoln gave his immortal two minute speech. It is indeed ironic that so many people, in complete contrast to Lincoln’s assertion, totally remember what he “said here”, but have so forgotten what the soldiers “did here.” Our tour of Gettysburg helped us to remember both.

After this one and a half day experience, we came away with a much better understanding and appreciation for the horrors of the civil war, how and why decisions were made as they were and why Chancellorsville and Gettysburg were such fun critical battles in the war.

Overall, it was an amazing experience. Anyone with even the slightest interest in American history, or who wants to better understand their American heritage, must visit Gettysburg (and ideally Chancellorsville). And anyone who can justify the relatively modest cost must use a personal guide to truly understand Gettysburg.

Out trip itinerary brought us first to Gettysburg about 10:00 AM, staying to 3:30 PM. We then drove 120 miles (unfortunately though D.C. Beltway rush-hour traffic) to Fredericksburg, where we spend the night. If we had it to do again, we would have reversed the trip; doing the first battles (Fredericksburg and especially Chancellorsville) first, and then driving—in non-rush-hour traffic—to Gettysburg.

But, whichever way you do the trip, if you end up spending a night in Fredericksburg, we would highly recommend: