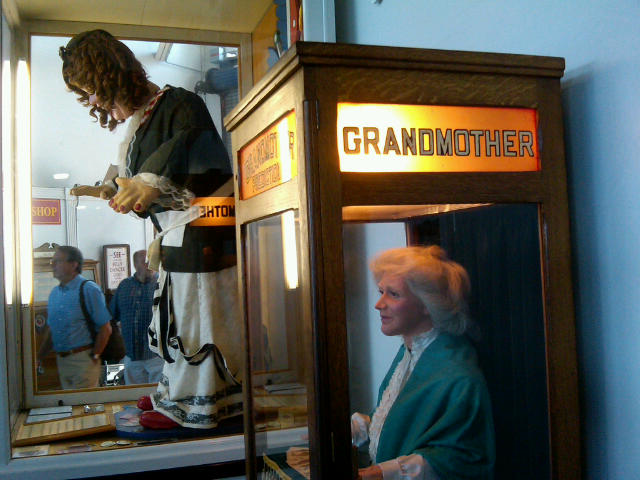 So, you thought that Fisherman’s Wharf is a cultural wasteland that is best left to first-time tourists? Have we got a surprise (actually a series of surprises) for you. There are a number of free and low-cost museums that can occupy an entire afternoon. The museums, while ranging from fun and quirky to educational and serious, are all interesting and well worth visiting.

So next time you are forced to take visitors to the Wharf, you can at least apprise them of the cultural side of the tourist attraction.

It is not so much a free museum as a chance to relive the arcade-style entertainment of a very different past. Although not actually a museum, The Musee is so much fun that you must see it. It houses one of the world’s largest collections of antique penny-arcade games and coin-operated mechanical musical instruments that, for the price of a quarter, you can play yourself. But while the Musee is really more of an entertainment complex than a museum, it does provides a chance to relive history. It also provides a modest contribution to education with a series of panels describing the history of entertainment in San Francisco, including detailed discussions of the Sutro Baths and Cliff House. The Musee also makes at least a nod to modernity, with a small collection of contemporary video games. So, while parents indulge in nostalgia, kids can remain occupied with a handful of modern video games. 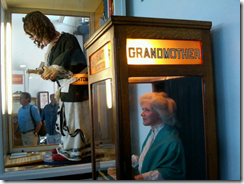 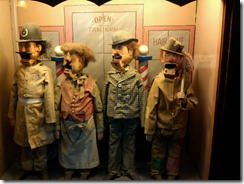 If you want to add some history, particularly naval and shipping history, to your Fisherman’s Wharf visit, don’t miss the Maritime Historical Park. The first two ships in the exhibit are right outside the back door of the Musee Mechanique. Board and explore the cramped surroundings of the World War Two submarine, the USS Pampanito and tour and learn the history of the SS Jeremiah O’Brien, one of the fleet of “Liberty Ships” that were so instrumental in transporting WWII troops and supplies to fronts from Normandy to the Coral Sea. Those looking for non-military naval history can head a couple blocks down Jefferson Street to the foot of Hyde Street. You can explore the pier exhibits  and the collection of historical ships, ranging from the 300-foot Square-rigged Baltclutha and the side-wheel paddle steamship Eureka, to modest scow schooners and tugboats. 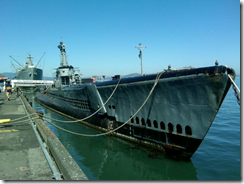 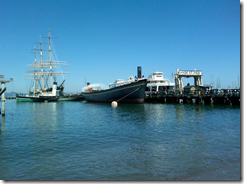 To put it all in context, visit the Visitor Center at the corner of Hyde and Jefferson. If you wish to go a couple blocks further, to Beach and Van Ness, you can also visit the museum’s recently reopened annex which currently has an exhibit “Mapping the Pacific Coast”, which examines the history of exploration and the mapping of the coast based on explorations including those of Sir Francis Drake, James Cook, George Vancouver and Lewis & Clark. (The veranda, meanwhile, also offers great views of the Bay.)

Although entry into the visitor centers and onto some of the ships is free, others charge small admission fees. Even these small fees, however, are waived if you have an annual pass for the U.S. National Parks. The museum also schedules frequent educational events for people of all ages.

The Dolphin Club, on Jefferson and Hyde, is the place to go if you want to learn about and partake in swimming and rowing In San Francisco Bay. The public club has exhibits, seminars and presentations on taking advantage of the Bay’s facilities. Although you just missed the club’s annual SF to Alcatraz swim (September 18), you still have plenty of time to sign up and practice for next year. And if you need to first acclimate yourself to the Bay’s perpetually cold water and strong currents, you can take a dip on your own, at the small beach next to the Club.

Ready to get back to more “touristy” activities? Mix some Fisherman Wharf kitsch with history at the Boudin Bakery museum. The museum has a large display tracing the history of sourdough bread with a self-guided tour of the baking process. If you are looking for an opportunity to interactively quiz the bread makers on the nuances of sourdough science, join the chief baker and docent from 8:30 to 9:30 each Thursday morning for a $6 continental breakfast with freshly-baked pastries and a discussion of sourdough and baking. 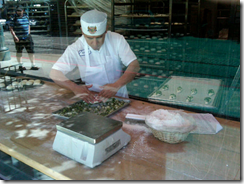 Aquarium of the Bay

Although the Aquarium and Bay conservation center is certainly not free ($16.95 general admission), senior admission is only $10 and the aquarium also sometime offers half-price coupons. While the aquarium pales in comparison to world-class centers such as the Monterey Bay Aquarium (which we will re-visit next week), what it lacks in scale and variety, it makes up for in convenience. It also provides an interesting jellyfish exhibit and a walkthrough tunnel in which you can examine a wide range of marine animals up close, from both top and bottom. Meanwhile, a short stroll across (or on busy days, a take-you-life-in-your-hands traverse) of Pier 39 will take you to a free view of another, more popular form of Bay sea life—the Pier 39 sea lions.

Feeding Your Body, As Well as Your Mind

Although learning and experiencing history can be fun, it can also work up a big appetite. Although you are undoubtedly familiar with the gauntlet of crab stands along Fisherman’s Wharf and endless chain of tourist restaurants that stretch from Pier 39 to Ghirardelli Square, there are a few restaurants that transcend the typically tourist fair. Among our favorites are:

Meanwhile, if you are just looking for a fast-food burger that far transcends those of the big national chains, In-n-Out Burger (Jefferson St) is to the West Coast what the much newer regional Five Guys chain is to the East Coast. And if you crave a big and memorable resort, you can return to Ghirardelli Square to wait in the perpetual line for a sundae at the famous chocolate emporium.

And if you still have additional time, you can browse the Beach Street art galleries, unwind with an Irish Coffee at the Buena Vista, where it was reputedly created and wait (usually with entertainment) at one of the area’s two Cable Car turnarounds (at the foot of Hyde and Taylor Streets) for a ride to Union Square.