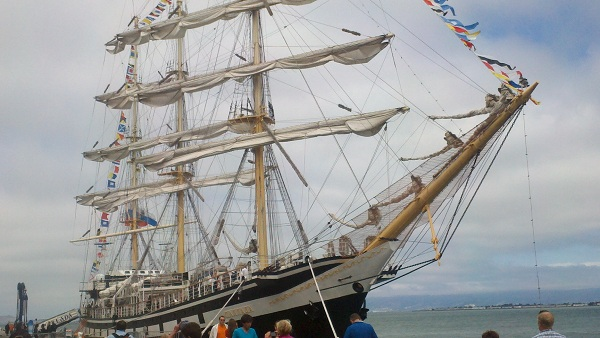 After learning and writing of our remembrances of being in Russia during the 1991 coup, we learned that a huge Russian sailing ship, the 354-foot Pallada, was in San Francisco and open for tours.

The three-masted schooner, which is supposed to be the fastest large sailing ship in the world, is indeed impressive. In addition to being very long and very fast, it is also very tall. This height, however, did not stop the crew from harnessing up and climbing the front mast to check and repair the sails before heading back out to sea.

The ship, which is owned by a fishing conglomerate, is normally used as a training vessel for marine-college cadets. Today, however, it was a goodwill vessel and mini-educational display, with large placards describing Russia’s history in exploring West Coast of North America (from Alaska to Fort Ross in Northern California) and Outer Space (from its first rocket, satellite and cosmonauts).

Overall, a nice respite from yet another, hum-drum, boring, weekend in San Francisco. J Now to go home and get rested in preparation for one of our favorite wine events of the year, tomorrow’s huge Family Winemakers of California tasting, which showcases more than 1,000 wines from about 350 small, family-owned wineries.