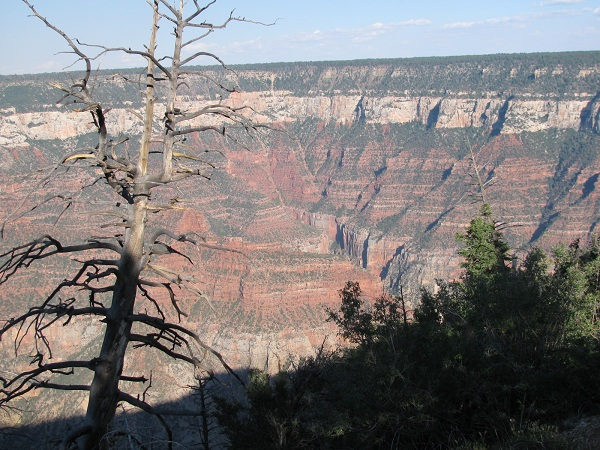 We have done the Grand Canyon in pretty much every way you can. Like most visitors, we generally visited the South Rim. In addition to its beauty, it has more lodging and services nearby. It also has more organized activities. For example, on one trip we drove around the canyon to catch a raft to take us on a three-day whitewater trip down the canyon to Phantom Ranch, where we hiked the 7-mile, 4,500-foot elevation gain, Bright Angel Trail to the South Rim (in 120-degree weather nonetheless).

The Grand Canyon North Rim is more remote, has fewer options for lodging and food, and is not open during the winter. But it is also less crowded. Besides, we hadn’t yet been there. It was time to change that!

Since we had a few extra days, after a Las Vegas trip, before we had to be back in San Francisco, we decided to make the five-hour drive to the North Rim. Although the drive is long and generally pretty boring, you do go by some lovely sandstone peaks and valleys toward three-quarters of the way through the trip, as you go through a corner of Arizona, into Utah.

Learning About the Grand Canyon

We arrived, after a five-hour drive from Las Vegas, at 2:00 PM. After a quick lunch at the Grand Canyon Lodge dining room—at a table with a view over the canyon, of course. We then checked out learning more about the area through:

The Canyon from the North Rim

We also had time for a couple of short walks along the Rim—about half a mile east of the Grand Canyon Lodge to Bright Angel Point, a short distance to the west to a nearby point.

But enough activity for the first day. It was now time for a pre-dinner drink, sitting at the canyon rail, watching the continually changing colors of a Grand Canyon sunset.

Although we planned the 10-mile round-trip, 3,000-foot elevation gain hike from the rim to Roaring Springs, Joyce had a chest cold that made breathing far too difficult for the very steep hike back up to the lodge. We settled for the short relatively level 3.0-mile round-trip Transept Trail along the Rim west of the Lodge and some more time at the Hopi exhibit. The views of the canyon, while nice, were less dramatic than those closer to the lodge. We did, however, have plenty of time to watch a mule deer, all but oblivious to the company of humans, munching on what must have been some delicious leaves.

Staying in the Grand Canyon

We also stayed and had three meals at the lodge. The cabins, although relatively basic, are pretty comfortable and quite affordable. The dining room, however, is constrained by the National Park mandate that all protein be cooked medium-well (instead of the medium-rare that we prefer). After our lunch experience with a Navajo taco and a cheeseburger, we decided on salads for dinner. We then washed away thoughts of additional food with a couple of ales at the saloon.