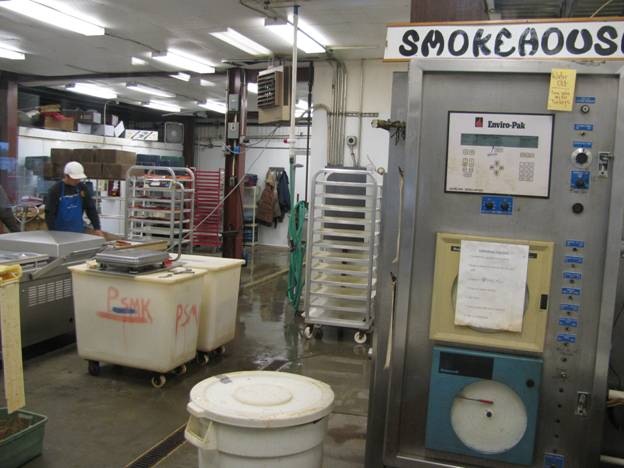 Salmon is a reoccurring theme in Alaska. We fished for salmon in Homer, watched real anglers prepare for a week of “combat” salmon fishing in the wilds of the Kenai Peninsula, watched bears stalk and devour salmon at Brooks Camp on the Katmai Peninsula. And we ate enough salmon—grilled, broiled, pan-fried, hot smoked, cold smoked, and jerky—over our week in Alaska to feel the urge to swim upstream and spawn.

But how much did we really know about salmon? After two educational salmon stops in Juneau, at a salmon hatchery and a salmon smokehouse, we recognized that there was much more to learn—and that it could be very interesting.

After arriving at the Juneau airport in the morning, we decided to take a slight detour on our way into the city and stopped for a fascinating tour of the Gastineau Salmon Hatchery. The hatchery offers two tours, a brief $1.50 tour of the outside of the building and a more extensive, personalized $10 tour of the entire process. We chose the $10 tour and were very glad we did. It took us into the bowels of the facility, where we saw and got to speak with people who performed every step of the process.

We saw and learned how:

This is a very worthwhile tour.

When we were in Bar Harbor Maine, we learned about the full lobster lifecycle, from operations of the hatchery, through lobster boats, lobster pound and the eating of lobster in every possible form. We felt we owed the salmon the same degree of respect while visiting Alaska. It was time to learn how it was smoked and prepared for retail shelves.

Jeff, who managed the packing and canning section of the Alaska Seafood Company, gave us the entire story and answered every question we could imagine asking. He guided us through the entire surprisingly manual process including:

And then we had a brief tasting. We couldn’t resist and bought enough smoked salmon to last us a year. But no fear, foil-packed salmon has a shelf life of ten years (compared with seven for canned)! 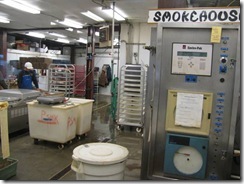 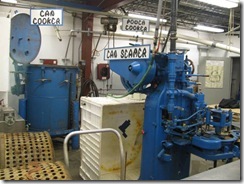 We will never look at salmon in the grocery store the same again.