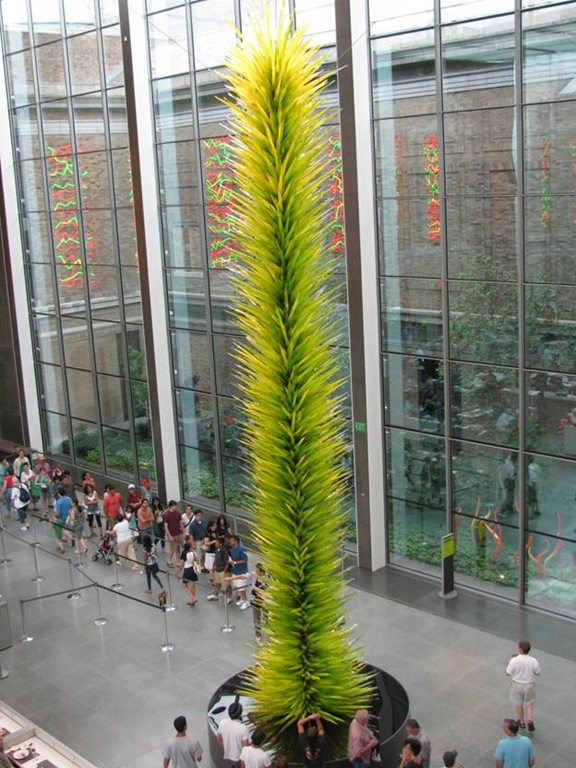 Although this trip did not include a visit to the Fenway’s most famous and popular residents—the Red Sox (who were playing out of town), we did visit a number of others, including: John Singer Sargent, Claude Monet, Pierre-Auguste Renoir and a younger temporary (not to speak of contemporary) resident, Dale Chihuly.

Virtually every trip back to Boston necessitates a stop at the Museum of Fine Arts (MFA for locals). A stop was particularly important this trip. First, it was our first back since the opening of the wonderful new Art of the Americas Wing. Second, we just so happened to arrive (what a coincidence!) during the museum’s big new Dale Chihuly exhibit.

Yes, after three Chihuly stops (St. Petersburg, Seattle and Tacoma) over the last month, not to speak of a big 2008 Chihuly exhibition at San Francisco’s DeYoung Museum, we still haven’t had enough.

The Chihuly show, as always, met our expectations. As with our blog on the July 4th celebration, we will let pictures of the exhibition tell the story. Following are examples of some of his spires, persians, seaforms, ikebana, floats, chandeliers and fiori (click here to see which is which), both alone and arranged on walls and in ceilings and boats.

And our favorite of all his designs, the graceful, ethereal baskets.

The New MFA—and the Old

So too did the new wing (although it did take us a while to reorient ourselves to the new geographical organization of the museum). The new wing is a beautiful display space and allows for a much bigger display than did the old museum.

Although we were certainly disappointed that the museum’s modern (from 1970 on) section is not yet open, and that a number of pieces that we enjoy are not currently available for viewing, we did have a chance, albeit brief, to reacquaint ourselves with some of our old Impressionist friends, including Monet, Van Gogh, Renoir and Rodin.

But, since we were already in the neighborhood, we decided to stop in at a smaller Boston museum jewel—the Isabella Stewart Gardner Museum.

This small museum, which is also undergoing a big renovation, is certainly a jewel, featuring the private collection of one of the city’s greatest and most generous art doyennes.

Although her collection, which consists largely of medieval, renaissance and religious art aren’t exactly our taste, we do enjoy much of the Asian, mosaic and 19th century European and American art. But whether or not you are attracted to the themes of the collection, it is worth the price of admission to enter the courtyard of the 15th-century Venetian palace-like structure alone.

A Stroll through the Fenway

The MFA and Gardner museums are both located around the Back Bay Fens, an urban oasis in the Fenway area of Back Bay. Although the Fenway is certainly best known and most widely visited for “its park” (i.e,, Fenway Park), the Fens was designed by famed landscape architect Frederick Law Olmstead as part of his “Emerald Necklace, a belt of green nature that is laced around and through the city.

Although a stroll through this urban oasis is worth a detour on its own, it just happens to be right on the way between the museums and the Back Bay. It is also home of the Victory Gardens, one of only two of the remaining gardens established though the U.S. during World War II. Although some of the privately farmed plots are still dedicated to their original purpose of growing vegetables, most are now dedicated to flowers. While actual entry into these beautiful plots is limited to those who actually farm them, all are, as shown below, open for viewing and enjoyment by everyone.