As is the case with virtually all our trips, we packed as many interesting restaurants—not to speak of local wines—as possible (at least within the context of our business obligations on this trip) into a short June 2011 trip to Vancouver.

How do we determine where to eat? It starts with some advanced pre-trip research. Once we get to a city, we ask knowledgeable locals for their favorite restaurants. Then we stop by to peruse the menus, atmosphere, and vibe of virtually every interesting restaurant we identified or that we passed by in our miles of walking.

We tend to favor places with locally sourced, sustainable seafood and interesting preparations. We had several meals and snacks while in Vancouver. Unfortunately, we misplaced ou notes on the food and wines. While we tried to reconstruct our meals from memory the following is the best we could do. 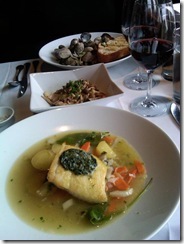 Speaking of favorites, we were also very pleased with our hotel.  The Georgian Court hotel was well appointed, had a pleasant, competent staff and comfortable beds. It is conveniently located between Yaletown and Gastown (not to speak—on Stanley Cup playoff weekend—of being even closer to the hockey arena). We totally enjoyed the hotel except for one thing—slow and spotty WiFi access. Even so, it is well worth considering. The cost was only about $150 per night, although this was with our convention discount.